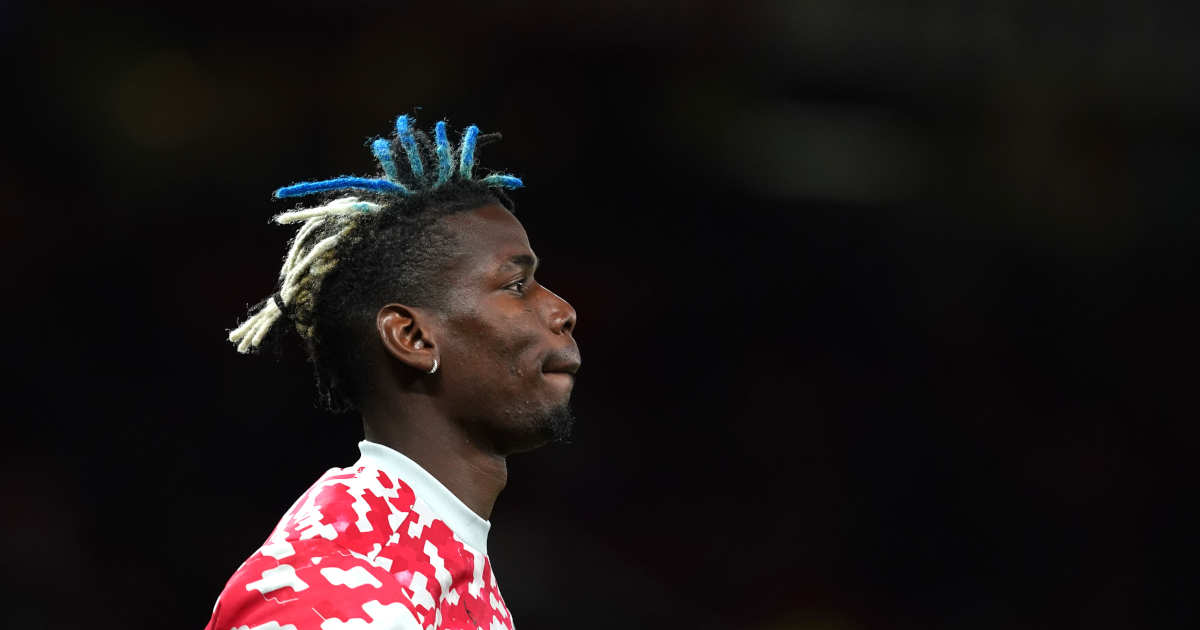 Manchester United should fire Paul Pogba from a cannon into the sun, Steven Gerrard has an incomprehensible decision to make, and Mason Mount has been to the dentist.

Another Pogba pile-on
There’s nothing the tabloid press loves more than a Paul Pogba story, and in a week without too many significant matches – thanks, international break – the Manchester United midfielder getting injured for a couple of months must have felt like manna from heaven for sports editors.

But as ever with a story concerning this particular player, there’s a load of nudging and winking to get through in order to get to the meat – or lack thereof – of the story. In The Sun, Neil Custis is more than happy to join the dots. ‘SAY THIGH BYE, PAUL’ shouts the headline on their story, but Custis’s ‘Man Utd Crisis’ is really little more than an opportunity to take a few hundred words to dunk on Pogba, over and over again. We have been here many times before.

‘The fact news of Paul Pogba’s injury while training with France will not make the headlines says it all,’ begins his article, teeth-grindingly. Under a headline.

‘His absence for two months after this international break will not affect Manchester United’s form one way or the other,’ he writes. There’s an awful lot of anger for something apparently so inconsequential.

‘In fact, they could be better off without him.’ Ooookay, Neil. We’re barely 100 words in and it’s already starting to get a bit incoherent.

‘They have grown fed up with Pogba,’ writes Neil. ‘They just want him out.’ Got any quotes for that, Neil? Mediawatch will even accept one from an ‘unnamed source’.

But no, no there isn’t. There’s a list of every mis-step that Pogba has made this season, a reminder that he ‘fell out with Jose Mourinho’ during the 2016/17 season, as if that could be relevant to any story about Manchester United being written at the tail end of 2021, and a strange little detour into criticism of his ‘entourage’ and ‘hangers-on’ (funny how some players get routinely criticised for their ‘entourages’ while others don’t, isn’t it?).

Of course, there’s an issue with this idea that United should just let Pogba’s contract run down and then jettison him: they’ve done this before, and ended up buying him back for £89m. But Neil’s thought of that. ‘Do not call it bad business to sign him for £89m and let him go for a free,’ he orders. Well, okay Neil, but is it okay to call it bad business to sign him for free, release him, sign him again for £89m, and then release him for free again? Because it sure sounds like bad business.

But it doesn’t have to be one extreme or the other, and letting go of a World Cup-winning player for nothing because ‘they have grown fed up’ with him or because ‘they just want him out’ sounds like very bad business indeed. Making business decisions for entirely emotional reasons usually is, but there are few others who get as emotional over Manchester United as Neil Custis, so perhaps we shouldn’t be surprised that he takes this view.

Gerrard’s cross(roads)
Also in The Sun there’s further recruitment advice, this time for Steven Gerrard. Gerrard is the odds-on favourite to be the new Aston Villa manager, but Graham Bryce is making a last ditch bid to, uh, something something Liverpool.

‘The former Liverpool skipper is Jurgen Klopp’s natural successor in the Reds dugout.’

Well, Jurgen Klopp is the Liverpool manager until at least the summer of 2024, and Mediawatch doesn’t believe that they have any issue with the work he’s doing right now.

‘Rangers boss Gerrard must now decide whether he wants to replace Dean Smith at Aston Villa to prove he can hack it in the Premier League.’

That would be a decent test, wouldn’t it? Doing a half-decent job at Aston Villa probably would be a good way of proving that ‘he can hack it in the Premier League’, wouldn’t it?

‘Although he will only be too aware that should a trigger-happy board sack him it could blow apart his dream of returning to Anfield.’

So, if he fails the test which proves whether or not he can ‘hack it in the Premier League’, he might not be suitable for the Liverpool job? Or, if he doesn’t deliver the goods at Villa, is it the board’s fault should they sack him?

‘Perhaps it was no coincidence that Klopp and Gerrard signed their contracts on the same day in December 2019, both of which expire in the summer of 2024.’

Is Graham suggesting that Rangers and Liverpool coordinated the contract dates for Jurgen Klopp and Steven Gerrard in order to be able to facilitate him moving to Liverpool in 2024, before anyone knew whether Gerrard would be a success at Rangers? What if he’d failed there?

And why would Rangers even agree that? If Steven Gerrard was nailed on to be such a success at Ibrox, why would they agree a contract that would guarantee them receiving no compensation for leaving at the end of his contract in 2024? It’s incoherent nonsense, this.

It seems fairly straightforward to Mediawatch. If Steven Gerrard accepts the Aston Villa job, he gets the chance to prove that he could be suitable for the Liverpool job. If he doesn’t prove it, it might be the Aston Villa owners being trigger-happy or it might not, and presumably the Liverpool owners will be able to make a solid judgement call on this.

Liverpool would certainly be barmy to take Gerrard on for sentimental reasons alone. They only have to look forty-odd miles up the East Lancs Road for evidence.

Welshman chose to play football for Wales: EXCLUSIVE
Meanwhile in the Daily Mirror, James Nursey has an ‘EXCLUSIVE’ story about Gareth Bale. There’s a huge picture of him, so what is this? A sensational interview with a player who’s just about to get his 100th Wales cap?

No, no it isn’t. It’s some brief comments from his agent, Jonathan Barnett.

‘DRAGON 1 THREE LIONS 0’ reads the headline, and the hook upon which this hangs is that Barnett once suggested that Bale could play for England, only to be told, ‘Never say that again if you want to be my agent!’

Gareth Bale made his debut for Wales 15 and a half years ago, so we’re hardly into ‘news’ territory, here. In fact, it’s not even news to tell this story retrospectively. Bale himself told a version of it himself to a Spanish radio station in 2014.

Gareth Bale would have qualified to play for England for on account of having one English grandparent, by the way, but he was born in Cardiff and lived there until he was 16. It really isn’t surprising that a player would want to represent his country of birth and where he spent the first 16 years of his life. This isn’t quite the ‘EXCLUSIVE’ that the Mirror would like us to believe it is.

Ole’s at the wheel (of the holiday bus)
Also in the Daily Mirror, Jeremy Cross has a few words to drop in on the now-cyclical Ole dunking season. ‘FLAK AS OLE GOES ON HOLIDAY’, says the headline. Ooh. More fury then, is it?

‘Fuming Manchester United fans have blasted Ole Gunnar Solskjaer for deciding to go holiday instead of trying to fix his side’s problems.’

Well, United fans have been ‘blasting’ Ole for quite a while, but it doesn’t seem to have made much difference to the club’s decision-making.

‘United fan Don Diego said: ‘It must be great being a United player. No problem with playing bad and getting a holiday instead of extra training’.

Thanks for your input, Don Diego, but considering the number of Premier League players who’ve been dropping like flies with injuries, quite likely through overwork after a punishing schedule over the last 18 months or so, Mediawatch might suggest that putting them through another two weeks of extra training because you’re angry that they haven’t been winning matches might do them more harm than good.

Mount the dentist’s chair
‘MOUNT’S KICK IN TEETH’ yells the Daily Express. What could this be about? A horrible training round accident, perhaps? Or has Gareth Southgate told him he’ll never play for England? What could this ‘kick in [the] teeth’ possibly be?

‘The England midfielder had his wisdom teeth removed on Sunday and was given permission to report late. But Chelsea star Mount is unlikely to be ready for the game.’

Oh. No drama to see here, then, unless Mason Mount’s dentist is removing his wisdom teeth by kicking them out, in which case said dentist should probably be reported to the British Dental Association.

Wild about Wilder
Mediawatch is a big fan of football sidebar articles that say absolutely nothing whatsoever and are presumably only included to fill a little bit of space, and the Daily Express contains this little nugget about the new Middlesbrough manager, Chris Wilder, in its Football Latest column:

‘Chris Wilder has told Middlesbrough to ‘dare to dream’ and to recreate the club’s glory days. The new Boro boss is desperate to take the Teessiders back into the Premier League after 11 of the last 12 seasons in the second tier.’

That’s it. That’s the story.

‘Journalism is the first rough draft of history’ as the publisher and Washington Post editor Phillip L Graham once said.