Who else missed Arsenal signing the 'new Wilfried Zaha'? Not just us then... 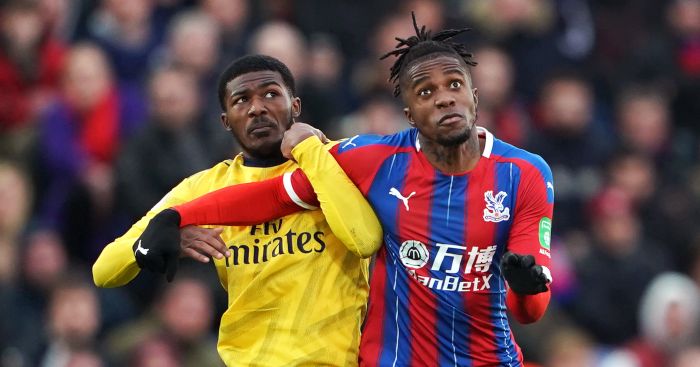 Ings can only get better

There is a quite wonderful juxtaposition provided by The Sun in their coverage of England’s win over Wales.

‘Yet last night, on his long awaited full debut, Grealish took his opportunity, in the same way as Everton’s Dominic Calvert-Lewin continued his remarkable start to the season with the opening goal.

‘Wolves defender Conor Coady grabbed the second with a finish that any of England’s forwards would have been extremely proud of while Danny Ings added the third.’

It might be the single greatest description of an actual overhead kick Mediawatch has ever seen. And the headline on The Sun’s website only makes it better.

Much Edu about nothing

Mark Irwin of The Sun has the inside scoop on Friday morning:

‘ARSENAL technical director Edu has revealed how he broke the news to Mesut Ozil and Sokratis Papastahopolos [sic] that they would not be playing for Arsenal this season.’

Oh wow. Did he send them a singing telegram? Or one of those TikToks? Perhaps he left a steaming turd in their lockers? The suspense is killing us.

“The way we did it was to sit down with the players concerned and to be open with them and I also spoke to their agents.”

Ah. He spoke to them. Thanks. For. That.

The boy who cried Wilf

Quite how Edu found the time to carry through such an elaborate plan as holding a conversation with a couple of Arsenal players is a mystery. The man has surely been too busy conducting some incredible transfer business.

Over to you, Daily Mirror:

‘Arsenal might have signed ‘new Wilfried Zaha’ after deadline day’

They certainly might have. They also might have signed the new Gervinho. It seems strange to speculate about how well a 17-year-old bought from Ajax and put straight into the academy will fare.

But this ‘new Wilfried Zaha’ tag has intrigued us. It’s strange to see a name other than Lionel Messi’s in those quote marks. Who has crowned new Arsenal signing Joel Ideho as such?

The only quotes included are from the player himself, who explains:

“I would say that my game is inspired by Wilfried Zaha from Crystal Palace because he’s a creative player with fast pace. My strengths would be my pace and my actions one-v-one.”

Is that how this shit works now? Mediawatch is inspired by Dwayne Johnson. That does not make Mediawatch ‘the next Rock’, you candy asses.

‘Manchester City close in on new five-year contract for Kevin De Bruyne worth over £300,000 a week as they look to tie the brilliant Belgian down for the rest of his career’ – Jack Gaughan, Daily Mail, October 8, 5pm.

‘KEVIN DE BRUYNE is closing in on a two-year £300k-a-week contract extension at Manchester City’ – Martin Blackburn, The Sun exclusive, October 9, 9.51am.

The EXCLUSIVE bit is presumably referring to it as a two-year extension to a current three-year contract rather than a five-year deal. Makes it completely fair to report the exact same story as your own work 17 hours later.

If you ever doubted that squad announcements are prime search engine fodder for click-hungry websites, behold the following offerings from three websites under the Reach PLC umbrella:

Credit to the Liverpool Echo for laying it on incredibly thick – ‘there was no room for rising star Curtis Jones… despite some good performances from the Liverpool midfielder so far this season’, with ‘omission’ in the headline implying he has been purposely excluded – before the big reveal: that he is young, club-trained and therefore eligible for UEFA’s ‘B’ list.

But that pales in comparison to this combined beauty from the Manchester Evening News and Football.London.

‘Manchester United named their 25-man squad for the Champions League group phase on Thursday morning, and Mason Greenwood’s absence from the ‘A list’ of players may have raised eyebrows among some supporters.

‘However, there is no need for fans to panic, as Greenwood didn’t need to be included on the ‘A list’ because he qualifies to be included on United’s ‘B list’, which is reserved for young, club-trained players.’

Well that’s a relief and definitely worth an entire story of word-padding to explain.

‘Chelsea named their 25-man squad for the Champions League group phase on Wednesday, and some absences from the ‘A list’ of players may have raised eyebrows among some supporters.

So many raised eyebrows. So much contrived ‘panic’. So much recycling. Great to see in 2020.

Mediawatch has but one question: is there really anyone out there still not aware of the absolute non-complexities in squad rules? Was someone genuinely under the impression that Frank Lampard omitted Mason sodding Mount?

Just speak to each other, guys.