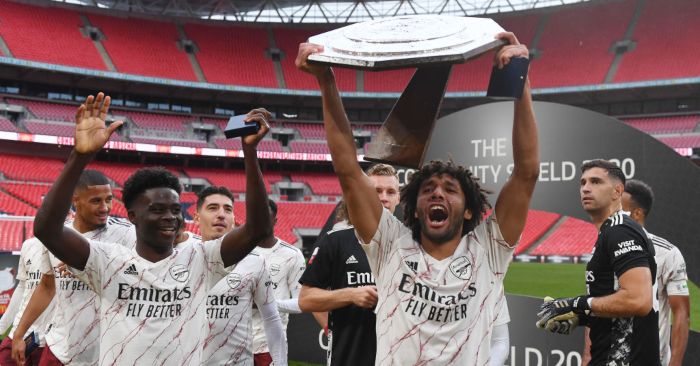 This just in: Arsenal are not Barcelona 2011 and won’t challenge for the Premier League title next season. Shocking, we know.

Less is Collymore
Remember when Arsenal finished eighth in the Premier League, closer in terms of points to 12th than fourth, then won the FA Cup and Community Shield while their entire fanbase predicted a title challenge in 2020/21?

Stan Collymore does. And he is here to ‘shake my head at the over-celebrations’ that followed Sunday’s victory at Wembley. He has even taken the time out to give this straw man a lengthy name as he constructs it:

‘This idea, peddled on social media by some of their supporters, that we’re now looking at a title-challenging team.’

Are the thoughts of two or three Arsenal fans on Twitter, the exaggerations of @MagnificentMikel and @XhakaLacaSaka to their 15 combined followers, really worthy of a dedicated weekly column in the Daily Mirror? This is how you use that platform?

No-one genuinely expects Arsenal to close a 43-point, seven-team gap to Liverpool in the space of a single summer under a head coach in his first full season of management. So thanks for telling us that they won’t, Stan.

‘Arteta has clearly learned from his Manchester City mentor Pep Guardiola that any old pot will do when you’re nodding to the fact you’ve added to the club’s overall tally of silverware.

‘But having watched English football for more than 40 years, I can tell both those guys that the Shield is a warm, cuddly curtain-raiser and nothing more than that.’

Those are the words of someone who has ‘watched English football for more than 40 years’ but won absolutely nothing, not even ‘a warm, cuddling curtain-raiser’, during his 12-year career. So quite how he knows it means ‘nothing more than that’ is a mystery.

And you ‘can tell’ Pep Guardiola and Mikel Arteta whatever you want but they probably won’t listen, just like when you insisted that the former was ‘absolutely deluded…if he thinks he’s going to turn up and outplay everybody in the Premier League.’

Two Premier League titles and a couple of Community Shields later, it really is difficult to say who has won that argument.

‘Don’t get me wrong, winning breeds success and I understand Arteta was probably trying to drill that into his players. “Keep in your head what it feels like to lift a trophy” – that sort of thing.

‘But in reality, all they have done is win seven matches to lift the FA Cup and Community Shield and that’s a long way from having what it takes to win 15 or 38-game trophies.’

That really is ‘all they have done’. Just like all France did was win seven matches to lift the World Cup. That’s how knockout tournaments tend to work. And pointing out the difference between them and league campaigns makes you sound quite silly.

‘My concern now is that there’s an expectation among Gunners fans that they are going to make this leap from winning level-two to level-one trophies this season.’

There isn’t. There is a belief that they’re moving in the right direction and progressing, but acknowledgement that there is considerable work to do to catch up. The only person making a ‘leap’ here is you.

‘So while it’s well done and keep going to Arteta, Arsenal still have so much to do before they’re challenging for major honours again.’

Thanks for joining us and everyone else in drawing that same conclusion, albeit considerably later.

‘And the club’s Twitter feed should understand that instead of banging on that we have just witnessed the reincarnation of Guardiola’s 2011 Barcelona like they did on Saturday.’

Have you genuinely just curled out 545 words because Arsenal posted this in celebration of scoring a really good goal against one of the best teams in the world at Wembley?

Nope. No mention of Barcelona there. Just appreciation of a nice goal and one grumpy sod wondering why a fanbase subjected to 18 months of Unai Emery is starting to contemplate a brighter future. What fools.

Jack it in
The news of Jack Grealish’s England call-up has been met with glee by the British media, with every national newspaper affording it back-page coverage. Take the Daily Express for example:

It hardly feels like the right time to be ‘on a mission to prove Gareth Southgate wrong’. You’re actually in the squad. So maybe focus on justifying him finally selecting you, big fella.

Except not only does Grealish say no such thing, he says nothing at all in this particular story. There are no quotes whatsoever. Just pure speculation – ‘Grealish’s absence from the original squad fed into the theory that the snub was personal’ – and an attempt to manufacture tension between player and manager that helps absolutely no-one.

Welcome to the squad, and the ridiculous spotlight that comes with it.

Journey South
The Sun do have exclusive quotes from Grealish, and he sure does sound as pissed off at Southgate as he is determined to show him what a numpty he has been for understandably overlooking him all these years.

“I want to show the manager what I’m all about, play to the best of my ability and, hopefully, keep my place in the squad.”

“I have no idea if I will be selected this time around. But if I am lucky enough to be called on, I’ll give it everything I have and try to learn from the experience.”

“I just want to get my head down and work hard.”

“I don’t know if I will get the opportunity to show what I can do on the pitch. But if that doesn’t happen then I’ve got to use every training session to show what I’m capable of and I’m confident of doing so.”

Wag1
That same outlet brings us the Donny van de Beek angle everyone is desperate to read:

Since when did ‘meet’ mean ‘leer over 11 pictures taken from the Instagram account of’? And when did they simultaneously get married while remaining unmarried?

House of the rising son
Around the same time the 23-year-old couple had an opinionated grandchild, it seems.

He doesn’t. He names five positions he believes they needs to strengthen. And that’s not the same thing. But everyone else was doing it so f*** it, why not?

Recommended reading of the day
Jonathan Liew on the new, old European champions.

Marcus Rashford being a king.