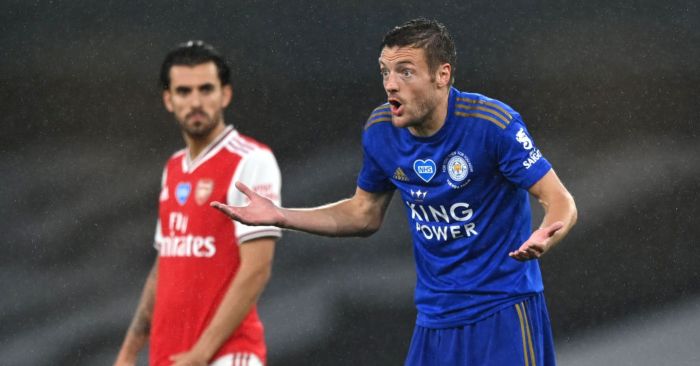 As that obsession with asking Jamie Vardy about once almost joining Arsenal suggests, this happened four years ago. The Gunners have changed managers twice since; Leicester have done so thrice.

Everyone has moved on – except for newspaper journalists who love a #narrative.

Mark Irwin leads the way in The Sun:

‘JAMIE VARDY came back to haunt Arsenal as Mikel Arteta’s faint hopes of Champions League qualification were all but ended.’

Can you ‘come back to haunt’ a club you have never had an official association with?

Then to the headline on Ed Aarons’ piece in The Guardian:

‘Jamie Vardy gives Arsenal painful reminder of what they almost had’

A (painful) reminder that before Tuesday evening, Vardy had played Arsenal seven times since the summer of 2016, scoring six goals, assisting one and beating them on three occasions.

But an equaliser in a 1-1 draw in July 2020 is clearly a more ‘painful reminder’ than two goals in a 3-0 win in April 2019, or a goal and an assist in November of that year that essentially cost Unai Emery his job. How haunting.

I’m tired of using technology
As Irwin adds in The Sun:

‘It was a bitter pill for resurgent Arsenal to swallow, particularly as they had been reduced to ten men by video technology to turn the game in Leicester’s favour.’

‘Eddie Nketiah had only been on the field for two minutes as a replacement for Alexandre Lacazette when he was sent-off for a nasty challenge on James Justin.

‘The young striker was clearly out of control when he caught the Foxes full-back with a 72nd minute tackle just below the knee.’

Well exactly. So while Chris Kavanagh initially showed a yellow card, he correctly overturned that decision on the recommendation of VAR Stuart Attwell. Using language like ‘reduced to ten men by video technology’ makes it sound like blame is being attributed instead of praise. Which is surely not the implicit intention, right?

Ask a simple question
‘Is it possible to be positive about Arsenal without slagging off Mesut Ozil, whose absence – for the seventh straight game – is no longer a novelty or talking point?’ – Mediawatch.

‘Bukayo Saka brings so much more than poor excuse of £350k-a-week Mesut Ozil in Arsenal attack after Leicester display’ – Rob Maul, The Sun.

A right Mes
Ozil, by the way, is mentioned once in that entire piece. Not before the ninth paragraph, nor thereafter:

‘What a difference to the unwillingness and ineffectiveness we often see from the poor excuse of £350,000-per-week Mesut Ozil in the Arsenal attack.’

An opinion someone is very much entitled to? Absolutely. Good enough for a headline? Apparently.

Over the hill
To anyone who watched Chelsea’s thrilling 3-2 win over Crystal Palace: what was your overriding thought?

Was it that Chelsea look excellent in attack but must strengthen in defence as a priority? That Palace impressed and were unfortunate not to get a result? Maybe Wilfried Zaha’s long overdue impact, the late control of Jorginho or the continued progression of Christian Pulisic stood out?

One thing is clear: it was a match with numerous compelling talking points.

But for Charlie Wyett of The Sun, it was all about one man. One English man.

Wait, what? Your first five paragraphs on a game that ended 3-2 is dedicated to a centre-half for the losing team that went off injured after eight minutes? You absolute maverick.

‘Chelsea substitute Tammy Abraham made it 3-1 before Christian Benteke made it 3-2 soon after.

A 34-year-old defender potentially tearing his hamstring in a race he was never going to win truly will be the stuff of legend.

Can words spoken in February really ‘shed new light’ on anything in July? And is ‘Thiago’s passion for control of games’ proof that he wants to join Liverpool or a natural byproduct of his only senior teams being Barcelona, Bayern Munich and Spain?

Still, you got your clicks by teasing fresh quotes from a player everyone is talking about and a massive fanbase is desperate to hear from. Bravo.

Price of admission
So we have the views of the player. What about the manager?

Just how did the Liverpool Echo get Jurgen Klopp to ‘admit’ something so outlandish as the fact that he will not ignore the summer transfer market. We’re guessing thumbscrews.

What’s up, doc?
The Sun have an exclusive for us all:

Well obviously. That is what they are there for and paid to do.

Based on a tweet from everyone’s favourite transfer experts, VarskySports. On July 3. It is on course to be our biggest story since late May. We are not proud.

Miguel Delaney does his thing.