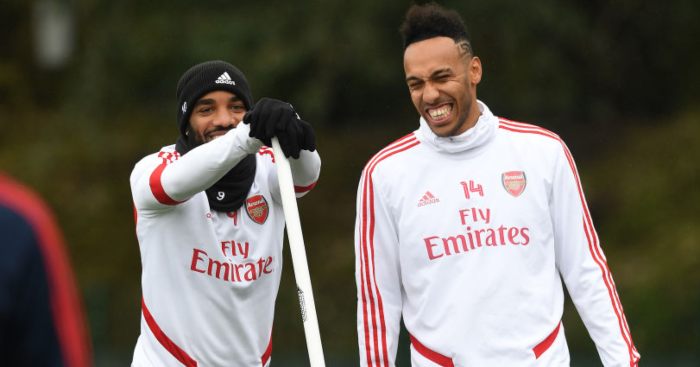 Stan Collymore is apoplectic at the idea Arsenal might let Pierre-Emerick Aubameyang ‘go almost without a fight’. Except…

Desperate Dan
‘Manchester United see Daniel James and Mason Greenwood as playing in different positions in the future, reports say. Both players have been deployed on the right wing, with Ole Gunnar Solskjaer well-stocked in other areas. However, that could be set to change in the coming years’ – Daily Express website.

Why would they even consider changing the position of Cristiano Sancho?

Sol searching
‘Ole Gunnar Solskjaer has installed a 20-SQUARE-METRE TV at Carrington in a bid to turn over Jose Mourinho’ – The Sun.

No he hasn’t. He was surely involved in the decision but someone else probably sorted that.

Hopefully a ‘United insider’ can clarify the matter.

“The club have gone out of their way to make it happen.”

Well it didn’t just appear out of thin bloody air.

Taking the Mik
Mediawatch very much enjoys the juxtaposition in the Daily Mirror on Tuesday.

Inside, Stan Collymore calls out Arsenal for being ‘prepared to let Auba go almost without a fight’.

The man who always speaks his mind should probably consult the newspaper that pays him first.

Pierre pressure
That Collymore column is full of the usual cliches: Arsenal ‘are no longer a destination club’; ‘they have allowed themselves to become the bridesmaid and never the bride’; ‘they no longer have the bottle to mix it with the really big boys’.

It’s a wonder he doesn’t mention how they haven’t replaced Patrick Vieira and would rather pass the ball into the net than win games. Go the whole hog or there’s no point, Stanley.

But what is this nonsense about how Arsenal have to ‘paint the Gabon striker as their future’? He’s 31 on Thursday! How about Bukayo Saka, Eddie Nketiah, Joe Willock or Gabriel Martinelli?

It rather undermines the comparison drawn with Wayne Rooney, whose contract U-turn in 2010 ‘was a big moment’ for Manchester United ‘because it told everyone…Old Trafford was still the place to be’. Rooney was 24 at the time. That’s a bit of a difference.

Arsenal should try and keep Aubameyang if it makes economic sense – and by all accounts they are trying. But it would not be ‘madness’ or ‘potentially disastrous’ to sell someone in their 30s if the funds are used to help rebuild. Nor would it ‘send out’ any bigger a ‘message’ than currently sitting ninth despite having such an apparently indispensable player.

Athletic build
Aside from offering discount codes out with reckless abandon and travelling to far-flung areas of the world to meet the second cousin of the teacher of the child who once bumped into Mo Salah in the market to trace the roots of his success, The Athletic really do some fine work.

In fact, that is an understatement. They pretty much sustain the entire industry of football journalism.

On Sunday, a piece by Laurie Whitwell was published. It suggested Paul Pogba would not start against Tottenham, while wondering whether he and Bruno Fernandes could prosper in the same team. It included information from within the club, some tactical insight and even a few pretty little heatmaps.

By Tuesday lunchtime, it remained prominent on The Sun’s website. The headline?

Again with the ‘as’. Is he helping direct traffic and telling Phil Jones where to park to show he is captaincy material?

But how about this for a slug…

The entire premise that Fernandes ‘has reportedly established himself as a leader’ and ‘is continuing to demonstrate his leadership qualities’ was based on the 22nd of Whitwell’s 34 paragraphs and 27 of his 1,783 words.

‘Fernandes has continued to assume a de facto leadership role by vocalising high demands, while Pogba is said to have enjoyed bouncing off a kindred football spirit.’

You have to applaud the sh*thousery involved in taking 1.5% of in-depth, detailed and well-researched analysis and recycling it into lazy clickbait padded out by quotes from Hugo Lloris on Pogba to bump up the word count, all because two players turned up for training four days before they play their first game in three months.

Wild at heart
Pundits have really struggled with Sheffield United this season. Danny Mills embarrassed himself in August, Garth Crooks was confused by their “basic football” in December and Stan Collymore suggested in February they ‘shouldn’t be anywhere near the top five or six’ and ‘would have been 12th or 13th’ in the 1990s.

A reminder that Jurgen Klopp described them as “exceptional” and “unbelievable” earlier this year, adding: “I couldn’t respect it more.”

Simon Jordan, on the other hand, fears they might be too good, too soon. He told talkSPORT:

“When you’re involved in a football team, you want to win the games that are in front of you because that’s what you do.

“The flip side to that argument: is it – you take it when you can get it, of course – but is it the right path of Sheffield United’s blueprint to find themselves in Europe at this stage of their evolution, because every time we hear clubs with this sort of resource finding themselves in Europe, whether it’s Europa League, Burnley being a specific case in point, it always seems to impede their starts.”

Clubs with what “sort of resource”? One that is able to break its own transfer record four times in one season? Is that what you mean?

And Sheffield United were in League One three years ago. Whether playing in Europe was “the right path” of their “blueprint” hardly matters when you’re swapping Scunthorpe away for trips around the continent.

“It goes back even as far as 2001, when Ipswich were going great guns, but were in European competitions and relegated the following season.”

Well the UEFA Cup certainly contributed to their downfall. But so did one win in their final 13 games, a run sparked by a 6-0 defeat to Liverpool in February; they were knocked out of European competition in December.

Jordan might have a point with Burnley, who never seemed particularly enamoured with the advent of European football. But why bring up Ipswich from nearly two decades ago? Why not UEFA Cup runners-up Middlesbrough, who still finished mid-table in 2006? Or Fulham, who emulated that achievement four years later? Or bloody Wolves, who qualified for Europe in their first season back in the Premier League and have continued to prosper because their foundations are solid. Does that not sound familiar?

Chris Wilder said in May that “we are hungry for more” and desperate “to achieve something very, very special” as “this opportunity may never come around again”. It doesn’t sound like he particularly cares whether this is right “at this stage of their evolution”. Nor should he.

That really is a head-scratcher.

Which Neville? Oh, that Neville. As you were.

No this cannot be say it ain't so surely not pic.twitter.com/ImoKfrjaR2