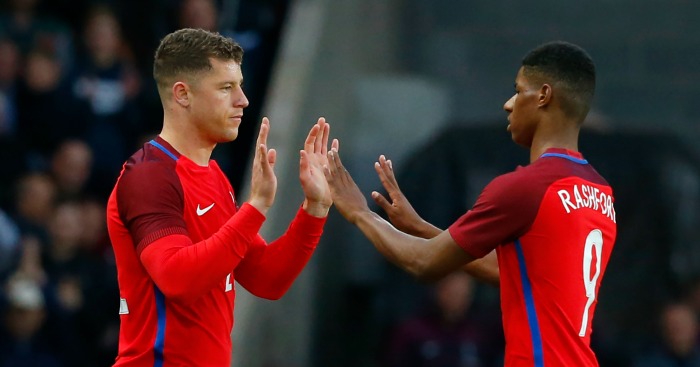 ‘When Roy trims two players from his Euro squad today, I’m sure the name Marcus Rashford will have led to more head-scratching than any other.

‘I certainly don’t think it is anything like the gamble some feel. How can it be, based on what we’ve seen so far?’

“I really hope that people don’t start talking him up for getting into the squad.

“Even if people get injured, we should learn from the past.”

Learn from the past? Here’s Ian Wright two months later in The Sun after citing Wayne Rooney and Michael Owen as examples: ‘The two real edge-of-the-seat, genuinely exciting moments for England fans have come after giving youth a chance. And I genuinely believe that if Rashford gets the nod for France, we could easily be heading for another.’

And what will you genuinely believe next week, Ian?

Barking up the wrong tree
And so it begins – the defence of media darling Ross Barkley.

‘It’s a big, fat shame if Barkley is left out,’ reads the headline in the Daily Mail as Matt Lawton attempts to make a case for a player who contrived to be dispossessed three times in 28 minutes against Australia on Friday night, a player who has scored two Premier League goals (against Newcastle) since November, a player who lost his place in a poor Everton side at the end of the season.

‘Barkley’s form, he would probably admit, suffered a dip towards the end of the season but he may well object to any suggestion that he is out of shape and his colleagues would argue that few footballers train harder. A body fat test, were he to have one, would almost certainly reveal he is extremely lean,’ writes Lawton.

So to get this straight, Barkley has not had a body fat test but if he did, you – from watching him from afar – are almost certain that it would show that he is not carrying excess fat. If that’s the near-flawless criteria, then he should definitely make the squad.

So why has his form dipped?

‘What Hodgson perhaps did not realise was that Barkley was exhausted at the end of a season that saw him play in all 38 Premier League games for his club and 10 cup matches.’

If Barkley is exhausted, how do Eric Dier, Harry Kane, Chris Smalling and Nathaniel Clyne feel right now? They have all played more football than Barkley this season and seem to have emerged not looking absolutely sh*t.

I wonder to myself…
To Mediawatch it seems entirely understandable that the FA might cancel planned press conferences from England players on Monday afternoon ahead of Tuesday’s squad announcement. Why expose players to questions about teammates who might miss out?

Dave Kidd’s reaction in the Daily Mirror? ‘We usually have to wait until the tournament has actually kicked off before England are plunged into panic mode.

‘But 12 days before the start of their Euro 2016 campaign, the FA were hurrying out a 6am Bank Holiday Monday email announcing a 48-hour media blackout.’

One person’s perfectly reasonable decision is another’s indication of ‘panic mode’; the latter has pages to fill.

Bizarre line of this or any other day
The Sun’s Neil Ashton has been in Chantilly, the ‘picture-postcard town’ which will play host to the England squad this summer. He has toured the town, taking pictures and being oh so very amusing about who would use the tattooists, the racecourse and the erotica shop (they ‘made their excuses and left’ like it was 1983).

It’s all utter nonsense and serves no purpose other than getting Ashton a jolly, but one line has left Mediawatch even more befuddled than the rest.

‘England players can visit Le Hameau, which is in the grounds of the team hotel, to watch the famous Chantilly cream being made,’ writes Ashton. So who is ‘most likely to whip up a storm’?

Here’s Ashton’s bizarre answer: ‘Hodgson loves a walk so he’s bound to be caught in the thick of it.’

Laboured intro of the day
‘BORN on Halloween, Marcus Rashford has been putting the frighteners on defenders since his early teens – and the story behind his rise to super-stardom is a thriller’ – Daily Express.

Somebody has had a bloody ‘mare.

ZZ bottom
‘ZINEDINE ZIDANE has backed Gareth Bale to beat England on his own,’ reads the back page of the Daily Mirror. The cheeky b***ard.

Except for the fact that Zidane never once mentions England and specifically says “one player cannot make a team”, that’s an excellent story. Well done, John Cross. Stick to Arsenal, fella.

Me, me, me
So why did Sunderland escape relegation? Let’s ask Sam Allardyce…

“The man management side of it has always been good for me – it’s worked quite well,” he told the Northern Echo.

“I have managed them, man-management is the biggest part of the job today. It’s your guidance and determination, your belief, your desire to achieve certain goals and to set out those goals to the staff behind the scenes and then to players.

“It was a long road, but we got to the area where we wanted to be.”

Mediawatch is happy to give Sam Allardyce a large dollop of credit (but not as much as Sam Allardyce himself) for his man-management, but we would wonder why this wonderful man-management did not lift Sunderland out of the relegation zone until after he had spent £15m in the January transfer window.

He bangs the drums
Danny Mills, September 2012: “Now we have the likes of (Gary) Cahill, Phil Jagielka and (Joleon) Lescott. None of them have the experience at club or international level that Terry has. I don’t think any of them are natural leaders like John Terry. He will leave a massive hole.”

Danny Mills, March 2013:  “Love him or hate him, whatever you think of him, last night it was screaming out for John Terry to be in that centre-half role to organise the team.”

Danny Mills, November 2013: “Roy Hodgson should get on the phone to John Terry.”

Danny Mills, May 2016, when asked if Hodgson should have picked John Terry for Euro 2016:  “Yes I would have done, I would have taken him to the last World Cup and I would have begged him, almost on bended knee, and say ‘please come and play for us’ because undoubtedly he is the best English centre-half bar none.”

Get a room and then get on that bended knee, Danny.

Stat’s entertainment
Prepare to be amazed.

‘This Olivier Giroud goal stat will amaze Arsenal fans’ is the top football headline on the Metro website.

And what is this amazing stat?

‘His goal against Cameroon represented his 15th for his country in his 48th appearance. And would you believe it, after the same number of games for France, Benzema, too, had 15 goals to his name.’