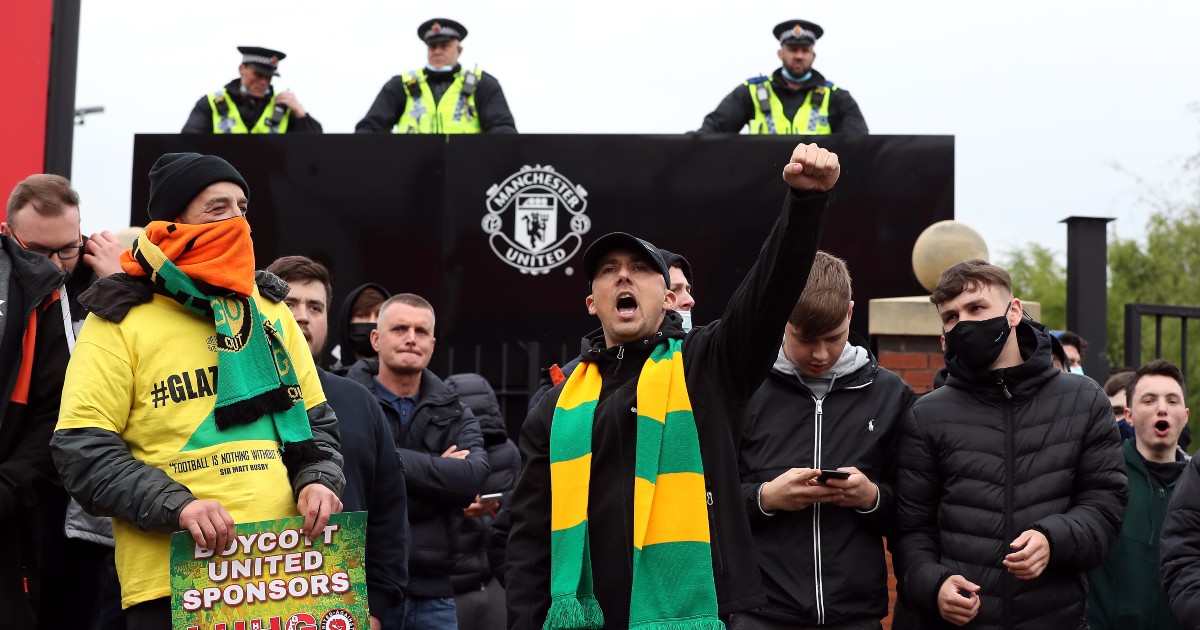 Of course Man Utd lost to Liverpool when fan protests continue to “destabilise” them. Can’t expect Fred to pass a ball in the circumstances.

Load of old kit
Top of the Daily Mirror website the morning after Liverpool beat Man Utd to maintain their hopes of Champions League qualification against the backdrop of more fan protests outside Old Trafford?

‘HIT OR MISS? Arsenal launch new neon 2021/22 away kit with rare logo – and goalkeepers will wear it too!’

It truly is the biggest story in all of football at the busiest time of the day. And it makes you wonder quite why actual writers are still sent to report on actual games.

But they haven’t forgot that Man Utd played Liverpool. Oh no. Silly you. This is the second biggest story on their football homepage:

You would be forgiven for thinking Liverpool had lost.

One has to scroll a fair way down to finally find some sort of reference to the actual result: David McDonnell’s opinion piece about Manchester United’s ‘lamentable’ defeat.

Before that come the following stories:

* Cristiano Ronaldo being sick of Juventus

Ever get the feeling that some people think actual football gets in the way? Sod the country’s two biggest and most click-friendly teams playing out a six-goal thriller when you can just rehash a Football.London story about two Arsenal players wanting to stay.

Haa Haa Haa Haa Haa
Let’s not brush over Jamie O’Hara ‘warning’ Man Utd against signing Erling Haaland because “players from Ajax and the Bundesliga” need “time to adjust”, which is amazing on a number of levels.

First, why are Ajax bunched in with the Bundesliga?

Second, the idea that Harry Kane “knows the teams” and “knows the grounds” and that makes him a better option is amazing. Haaland truly would be completely dumbfounded at the concept of Turf Moor.

Third is the suggestion that “if you want to guarantee yourself the Premier League title in the next few years, you sign Harry Kane”. A reminder that this advice was given to Manchester City, who have just won the Premier League title by playing most of the season without a recognised striker, and Man Utd, for whom signing a new centre-forward might not solve their defensive issues.

Last but not least, Haaland scored a hat-trick on his Champions League debut for Salzburg in September 2019, then two goals in his first Champions League appearance for Dortmund the following February. He scored a hat-trick on his Bundesliga debut and has netted 16 goals in 14 games against Liverpool, Paris Saint-Germain, Napoli, Leipzig and Bayern across spells with two clubs in different countries.

It certainly “takes time” for some players to acclimatise to a new side. But nothing in Haaland’s career thus far suggests that applies to him even remotely. At least wait until he plays for Ajax first. 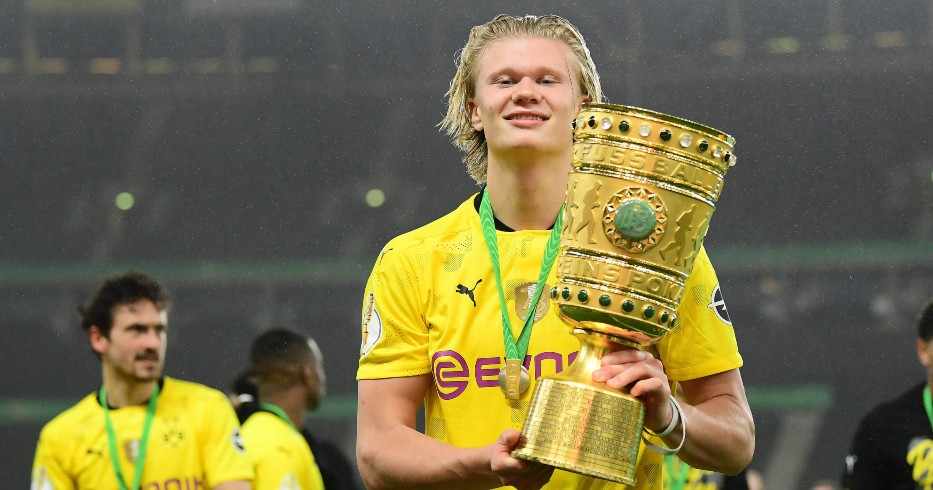 Glazed over
The Daily Telegraph know exactly what they are doing with a headline of ‘Manchester United protesters are harming their own team much more than the Glazers’. The problem is that Oliver Brown’s opinion piece is not a great deal better.

‘Surely, the time has come to question whether such protests, for all the sincerity of their message and motive, are producing far less good than ill,’ he writes, and to be fair it took longer than most predicted for protesting supporters to be painted as the problem, not the owners that have saddled the club with more than half a billion pounds of debt.

‘The vast majority of United fans would never set out to hurt their team, but the loss to Liverpool, sealed by two goals for Roberto Firmino, suggested they were doing just that.’

It ‘suggested’ that Eric Bailly isn’t the most reliable centre-half, that Harry Maguire was an important absentee and that Man Utd need improvements in central midfield. If you watched Luke Shaw try and dribble into a sea of Liverpool shirts while Fred failed to find a teammate with a pass and your first thought was ‘Fans’ fault, that’, no-one can help you.

‘[The Glazers] would rather pull the shutters up at United than entertain any talk of giving up a controlling stake. The end-game, as the chants and the green-and-gold scarves never cease reminding, is for the Glazers to sell up.

‘But since that is certain not to happen any time soon, the harsh truth is that the United protests are becoming futile shows of outrage.’

Time to give up then, guys. Oliver Brown has called it. You forced the first postponement of a game due to fan unrest in Premier League history but this is all just so very ‘futile’.

‘For now, the only effect is to destabilise the team.’

Again, absolving those players of blame because they were ‘destablised’ is incredibly generous. Ole Gunnar Solskjaer himself said any disruption was not the reason they lost.

‘By turning Old Trafford once again into the grimmest ring of steel, they are not helping their club, their team, or even their own cause.’

And the best person to inform the supporters about ‘their own cause’ is, of course, a Daily Telegraph journalist who seems particularly reticent to blame the ‘ruthless investors’ and ‘unabashed capitalists’ in charge.

Midfield minefield
‘United’s midfield department has not been this imposing since they last hoisted the European Cup in 2008’ – Samuel Luckhurst, Manchester Evening News, October 29, 2020.

‘Leicester and Liverpool’s midfielders are at a different level to United’s’ – Samuel Luckhurst, Manchester Evening News, May 14.

LIVE and in colour
Top of the Manchester Evening News website is obviously the following:

Bruno Fernandes – definitely not crowbarred into that headline because Roy Keane said some incendiary things about him the previous evening – is not mentioned once. And there are shockingly no ‘highlights’ from a game they have no rights to either.

Aside from that, no issues at all. 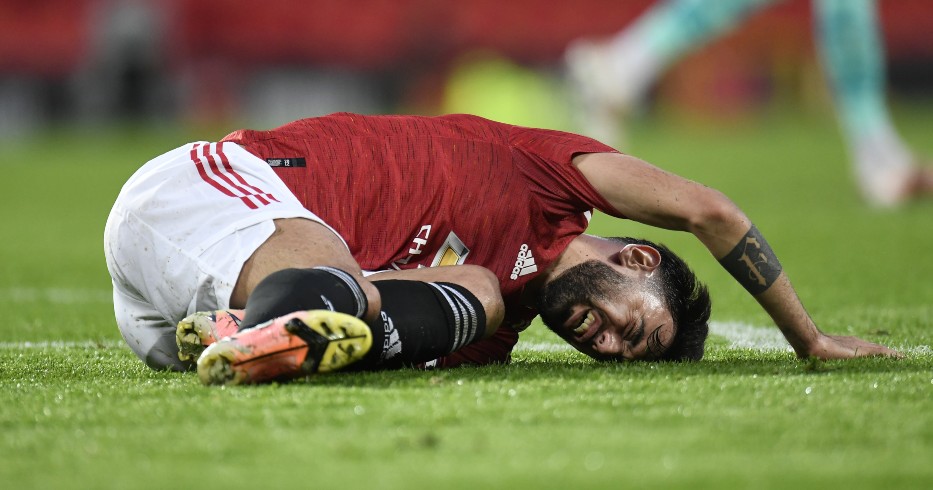 Echo chamber
Over at the Liverpool Echo, they do at least have the common courtesy to put the original work of one of their actual writers front and centre. But that does not stop them suffering from a similar affliction.

The explanation for Mo Salah’s goal celebration? He scored an important goal. Or ‘the mixture of joy and relief was tangible as Salah dropped to his knees, threw his head back and slid across the Old Trafford turf before being buried underneath his ecstatic team-mates.’

The ‘message’ that Trent Alexander-Arnold sent to a ‘special guest’? That he is very good going forward, which Gareth Southgate had presumably not noticed up until Thursday evening.

Celebrate good times, come on
Mediawatch must have missed something regarding what seemed to be a fairly standard goal celebration at the end of a draining game at the home of a bitter rival because it is all the Liverpool Echo can talk about.

Ramy Abbas Issa saying ‘My celebration of that goal wasn’t that different than Mohamed’s’ really is monumental news. What an ‘admission’.

Brunope
Neil Custis of The Sun has written an entirely sensible piece on the game at Old Trafford, although…

‘It was Fernandes’ 26th goal in the Premier League for United, the most of any player in their first 50 games in the competition’s history.’

“I sent in my CV. It’s the only job I have ever applied for. I got a polite no. But I would have loved the opportunity to stand in front of them and be interviewed” – Joe Cole, May 14.

Chest control
Duncan Wright of The Sun also tells us that Thomas Tuchel ‘will be handed a £150million transfer warchest by Chelsea’ as a reward for his fine work thus far.

They spent more than £220m last summer. Maurizio bloody Sarri was given almost £130m in his only season. And £150m could possibly be enough to afford one of the two strikers they are reported to want in Erling Haaland or Romelu Lukaku, provided they sign no-one else for a fee. It’s barely a big battle box for Chelsea, never mind a ‘massive warchest’.

Recommended reading of the day
Miguel Delaney on the FA Cup final.