Home Mediawatch BrunO Fernandes: BOth ‘the new CantOna’ and better than POgba 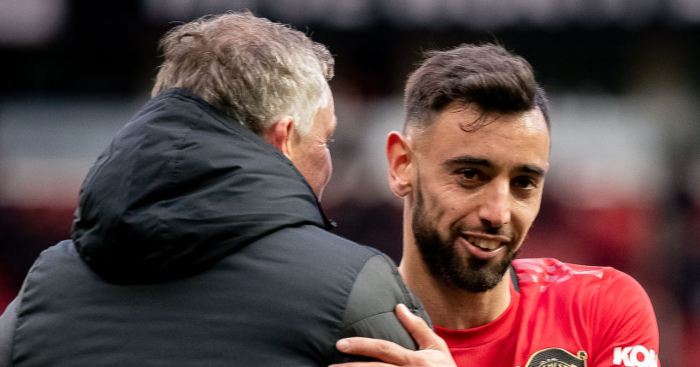 Neil Custis is fascinated by the fact Bruno Fernandes has an ‘O’ in his name. The boy is already a legend, by the way…

O negative
Mediawatch is not sure what it finds more amusing about the following double-page spread in The Sun‘s Goals pullout.

Here is a double-page spread in which Neil Custis marvels over the spelling of Bruno Fernandes' name.

'Bruno Fernandes is already having his name sung around Old Trafford.

It might be Neil Custis’s inexplicable obsession with the letter ‘O’ in the name of Bruno Fernandes.

It might be the use of a graphic pointing out Manchester United’s win-rate with Fernandes this season, the Portuguese having played literally three league games so far.

It might be the insistence on framing his fantastic performance against Watford as some sort of criticism of Paul Pogba.

‘The £46.6million buy from Sporting Lisbon is the player they have been missing during these turbulent years.

‘The sort of player Paul Pogba could have been for United.’

Because he absolutely never played well at any stage for them. Not even when scoring the opening goal in their Europa League final win three years ago. He’s always been sh*te and disinterested.

‘United’s failure to add to the striking department is whathas brought the most criticism but now Martial is starting to fire.

‘And unlike Pogba, United have a midfielder of influence once more. Someone who wants to wear the shirt.’

Seriously. He hasn’t played since December. The immediate reaction to United keeping a clean sheet wasn’t ‘oh, this proves just how sh*t Phil Jones is’. It was to hail the defenders who did play. So why, when watching a technical midfielder positively influence a game, is the instinct to drag Pogba into it?

It is possible to praise someone without denigrating anyone else.

And silly Custis. Does he not realise that Pogba has an ‘O’ in his name, too?

Boo-urns
Bear that particular start from Custis in mind when reading this from Chris Wheeler in the Daily Mail.

‘He was the last Manchester United player off the pitch, followed every step of the way by a TV camera. Bruno Fernandes lingered in the centre circle to reciprocate the applause and then hesitated again as he approached the tunnel.

”Bruno,’ they chanted in the same way they used to salute Wayne Rooney. You know, the one that sounds like booing at first.’

It turns out that his name ending in an ‘O’ doesn’t make even the slightest bit of difference.

Pog slippers
But that is something of a theme in Monday’s newspapers. The mention of an injured player, that is, not the fixation on the letter ‘O’.

David McDonnell is here for the Daily Mirror:

‘He was the best player on the pitch by some distance, orchestrating the convincing victory which took Solskjaer’s side up to fifth and kept them in the hunt for a Champions League place.

‘With Paul Pogba having spent most of the season sidelined by injury, not to mention his desire to leave, United have been crying out for a player with the guile and creativity to make a difference.’

That second paragraph works without the first 19 words, FYI.

I’m gonna make a change, for once in my life…
The Daily Mirror website headline to that McDonnell piece?

All based on a fairly tame line: that ‘Solskjaer may have likened Fernandes to Scholes, but his mid-season impact is more akin to that of Eric Cantona, who arrived in 1992 and was the catalyst for United’s domestic dominance.’

That is literally the only mention of the subject of the headline and URL. Top work, online bods.

Once Bernd, twice shy
Mark Irwin of The Sun was left demanding some strange answers as he left the Emirates on Sunday evening.

‘Just as with Everton’s first goal, questions will be asked about Leno’s bravery as he failed to take control of the chaos in his six-yard box.’

Will they? Dominic Calvert-Lewin scored with an overhead kick outside the six-yard box. Should Leno have predicted that David Luiz would contrive to shoulder it backwards? And Richarlison’s goal was a result of a mis-kick and a quickly redirected header, not a lack of ‘bravery’ on anyone’s part.

Pick of the bunch
Juxtapose that with Dominic King’s article in the Daily Mail, which makes nary a mention of Jordan Pickford’s performance.

The majority of the blame ought to be apportioned to Everton’s defence, but he has now kept one clean sheet in eight Premier League games. Pickford’s 59.8% save percentage is the second-lowest of any first-choice Premier League goalkeeper, better than only the recently dropped Kepa.

Pray tell, Dominic: is it still true that ‘only one man can start in goal for England in Euro 2020 – and that is Jordan Pickford’?

Finish him
‘Mason Greenwood is ‘best finisher at Manchester United” – The Times, February 24, 2020.

But what do you think about his finishing, Ole?

Steep incline
If you don’t believe the advent of VAR has made the lives of officials considerably easier, then we direct you to the words of Peter Walton in The Times.

‘In commentary during the Chelsea-Tottenham Hotspur match on Saturday lunchtime I was inclined to the view that there was nowhere for Giovani Lo Celso’s leg to go and he was trying to create space rather than injure his opponent.

‘But the more I’ve looked at it the more I have become convinced that it was definitely a red card.’

Keys to the castle
All Walton needs is the same clarity and courage in his convictions as Richard Keys:

I don’t like goals being disallowed for stray toe nails & arm pits – but it’s what we’ve been doing all season – so on that basis how did VAR miss this? 🤷‍♂️ pic.twitter.com/Uc5wzUvAzs

Just how does Anthony Martial run with an incredibly large left foot and hips seemingly detached from his body?

Recommended reading of the day
Andy Brassell on Bayern Munich.