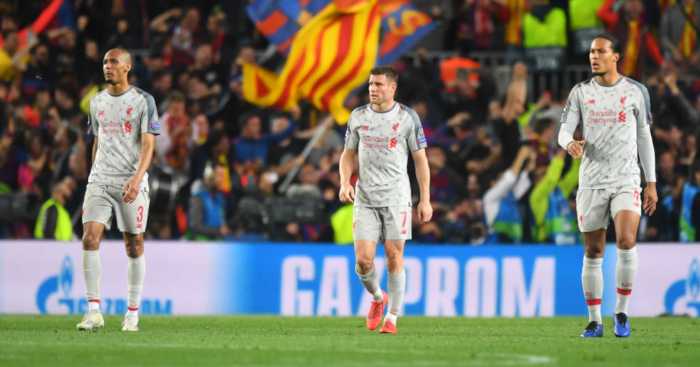 Served cold
Obviously, Liverpool losing a game of football is not a ‘story’ so The Sun needed a narrative, an angle, a hook. Because football, schmootball. Step forward one Spanish striker.

‘FERNANDO LLORENTE got revenge on Liverpool as they crumbled in Naples.’

Yep. After smarting for the whole summer with the pain of losing a Champions League final (in which he played nine minutes), scoring the pretty inconsequential second goal in a 2-0 victory in the opening game of the Champions League group stage must have tasted so, so sweet.

‘It should hurt, but does it? While there is undoubted frustration and anger among the players and supporters, there is a different feeling compared to defeats past. Indeed, you have to far reach back into your psyche to actually remember the feeling of a competitive defeat to draw on any parallels.’

‘You have to far reach back into your psyche’? All the way back to May 1 and a 3-0 shellacking in Barcelona? Or does that not count and we have to rack our brains to remember all the way back in January when Liverpool potentially dropped the title initiative to Manchester City?

Answer: Because Danny Murphy said so.

Give me oil in my Lamps
‘Chelsea played like newbies, novices on the biggest stage European football can offer…one game in and already Frank Lampard has it all to do…Lampard was an old hand at this, an established performer at the elite level of European competition. He is entitled to be upset…Lampard is not the type to take part, to be satisfied with a few group games…he will be livid after his Champions League bow as manager ended in defeat.’

Does anybody want to tell The Sun’s Neil Ashton that Frank Lampard is the Chelsea manager and he picks the team? If Chelsea looked like ‘newbies’ and ‘novices’, then at least point a pinky finger at the man who left Olivier Giroud, Pedro and Chrsitian Pulisic on the bench; that trio have made well over 100 appearances in the competition.

‘Upset’? ‘Livid’? He should take a look in the mirror at the man so intent on making a young, English point that he might leave Chelsea in grave danger of European failure.

Don’t be cruel…
Headline in the Daily Mail:

‘ROSS PENALTY HORROR ON A CRUEL NIGHT FOR FRANK’

Odd how we don’t remember too many ‘cruel nights’ for Maurizio Sarri.

According to reports
Football ‘journalism’ in 2019 is bizarre.

The Sun‘s chief football reporter Neil Ashton was claiming an ‘exclusive’ on Tuesday night that ‘UNAI EMERY ordered Arsenal players to show “solidarity” to the outside world during a team dinner called straight after the Watford debacle’.

Less than an hour later, Sami Mokbel of the Daily Mail had the same story, if indeed colleagues going out for dinner can ever really be described as a ‘story’. He wrote:

‘Sportsmail can reveal the Gunners squad had dinner at trendy Mayfair nightspot Novikov just hours after surrendering a two goal lead to draw 2-2 at Vicarage Road.

‘It is understood the night out was cleared by boss Unai Emery, who has been actively trying to garner a greater team spirit among within the club.’

And then on Wednesday morning, The Sun website quite like the look of this new Arsenal story. After all, is there anything more newsworthy than men going out for dinner? So where do they go for their information? To their chief football reporter? Don’t be silly…

‘ARSENAL boss Unai Emery reportedly sanctioned a night out for his flops after they threw away a two-goal lead against Watford.

‘And the Daily Mail insists Emery gave the OK as he tries to build team spirit in his camp amid reports of dressing-room unrest.’

Which prompts the question: Why keep a really expensive dog if you’re just going to mimic next door’s dog and bark yourself? Or something.

So when you’re near me, darling can’t you hear me…?
‘John Stones is ready to answer Manchester City’s defensive SOS at Norwich City this weekend’ – Daily Mail, September 11.

‘PEP GUARDIOLA will send an SOS to Fernandinho after Manchester City’s defensive crisis got worse’ – The Sun, September 18.

We’re pretty sure the manager just names them in the team.

United we stood
Almost as daft as Gary Neville’s suggestion that Manchester United’s dream signings should be Raphael Varane, N’Golo Kante and Kylian Mbappe is Jermaine Jenas casually writing in the Daily Mirror that ‘if the aim is to go young, with the likes of Aaron Wan-Bissaka and Daniel James, that’s fine. But go out in January and find a couple more…like Jadon Sancho’.

Because of course Jadon Sancho – scorer of two goals and creator of five more in four Bundesliga games this season, currently lying second in the table, and fresh from playing 90 minutes against Barcelona in the Champions League – will jump at the chance of joining Manchester United to play Europa League football.

We keep waiting for pundits who played football in the 2000s to catch up with the reality of 2019; we suspect we will be waiting a while.

Hold me close
Wait a minute, there’s a headline in the Manchester Evening News that might back up Jenas:

‘How Fred has already given Manchester United what they need’ – Manchester Evening News, September 18.

Over-complication of the day
‘The stats that show Steve Bruce has a problem at bottom-three club Newcastle’ – Daily Mirror.

Groom at the inn

Miguel Delaney on ‘the enthralling capriciousness of football’