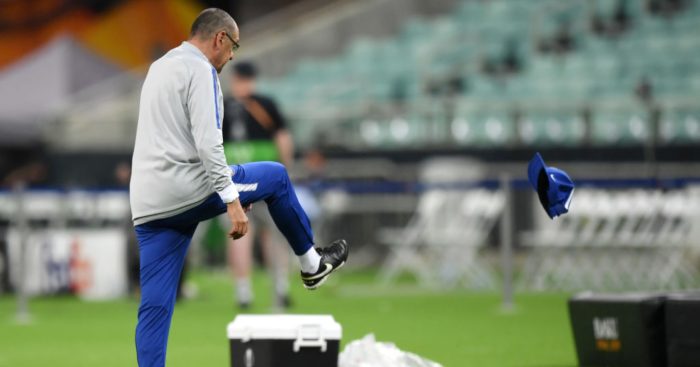 Wherever I kick my hat…
From The Sun website:

‘CHELSEA have revealed Maurizio Sarri blew his top during a Europa League final training session due to being unable to practice set pieces.

‘The Blues boss stunned onlookers and fans as he tossed his baseball cap at the ground in frustration on Tuesday.

‘Fans and media widely assumed the 60-year-old was fuming at David Luiz and Gonzalo Higuain for kicking out at each other in training.’

Seriously, a man kicked his hat. That’s all.

And it’s worth noting that The Sun were absolutely aware of Chelsea’s explanation for Sarri’s ‘bizarre tantrum’ when they put together that back page.

And they were absolutely aware on Tuesday morning when the headline story on their website still read ‘Furious Sarri storms out of training as Luiz and Higuain square up in Baku’. So that ‘as’ is doing an awful lot of work in that headline.

Oh and is it really possible to ‘storm out’ so bloody slowly?

It only takes a minute
It’s fascinating that The Sun report on their back page that ‘the flashpoint occurred moments after players David Luiz and Gonzalo Higuain had a bust-up during a practice game’.

We turn to the Daily Mirror and they report that Sarri threw down his cap ‘minutes after David Luiz clashed with team-mate Gonzalo Higuain’.

Anarchy in the Baku
‘Why Maurizio Sarri stormed off during Chelsea training before Europa League final’ is a perfectly reasonable headline on the Daily Mirror website. But obviously it is nowhere near sexy enough, so how is that story sold on the football homepage?

‘Chelsea anarchy! Blues boss Sarri boots his cap as he storms off following bust-up between senior stars Luiz and Higuain in Baku.’

Anarchy! A ‘state of disorder due to absence or non-recognition of authority or other controlling systems’!

Two players exchanged a few words and an old man kicked his cap, for f***’s sake.

Intro of the day
‘MAURIZIO SARRI was once a merchant banker – and there are some Chelsea fans who regard that as a euphemism for their manager’ – Andrew Dillon, The Sun.

Yep, getting a West Ham fan to write a profile on a Chelsea manager truly was an excellent idea. A WEIRD FOREIGN, you say?

Cutts adrift
The Sun Online, Jake Lambourne and Daniel Cutts, May 28, 2pm: ‘FLORENTINO PEREZ has confirmed Real Madrid’s intentions to snare Eden Hazard away from Chelsea after claiming he’s been trying to sign him for years. The 28-year-old looks set to join Los Blancos for £100million in the summer as the Belgian international nears the end of his contract at Stamford Bridge.’

Back page of The Sun, Daniel Cutts, May 29: ‘REAL MADRID are confident they have agreed a deal to buy Eden Hazard from Chelsea for up to £115million. Negotiations over the past two weeks are understood to have reached a resolution.’

Does ‘up to £115million’ cover the £100million of the day before? Maybe it was Jake Lambourne who was keeping the price down.

Hyperbole of the day
‘Arsenal, sliding into decay in the final dark days under Arsene Wenger, are in danger of fading away’ – Neil Ashton, The Sun.

Reminder: Arsenal finished one point behind Tottenham in fifth.

Money, money, money
Of course, Arsenal are ‘in danger of fading away’ but all that could change with 90 minutes in Baku, where victory would open the financial floodgates, regardless of what you might have read in The Guardian from David Conn. For the real financial picture, we turn to MailOnline and their bombastic headline:

Wow. That seems like a lot of money, especially as we have recently read that Liverpool will earn less than £100m from actually winning the Champions League.

It’s at this point that it becomes clear to Mediawatch that the ‘£140M JACKPOT PRIZE’ that Arsenal ‘could unlock’ is basically all of the money available to Arsenal if they win the Europa League, and then the UEFA Super Cup and then the actual Champions League next season. Right now we’ll give you a generous 500/1 on that combination.

We click on the link (of course) and find a headline of ‘Winning the Europa League final and returning to the Champions League will earn Arsenal a cash bonanza of at least £90MILLION… even if they crash out in next season’s group stage’ is a little bit at odds with that first headline of Arsenal’s £140m jackpot prize. Indeed, there is no mention of £140m in the piece at all. It’s almost like it’s all absolute bollocks designed to get the biggest number possible onto the homepage.

Now Mediawatch is intrigued by how Adam Shergold even reached £90m, which really does qualify as a ‘cash bonanza’.

‘Arsenal stand to pocket around £43.4m in prize money if they defeat their London rivals and that would rise to £47.5m if they beat either Liverpool or Tottenham in the UEFA Super Cup in Istanbul on August 14.’

Okay. But what’s not clear here is that Arsenal are going to pocket £40m whether they beat Chelsea or not. That money is safe and, as such, does not really qualify as a ‘cash bonanza’. So beating Chelsea in Baku will only earn them an extra £3.4m or so, and the potential of another £4m. It doesn’t feel like a ‘mammoth windfall’ so far.

‘But simply appearing in the group stage of next season’s Champions League would see Arsenal almost double their money, with over £20m television money, a hefty coefficient payment and a ‘starting fee’ of £13.4m just for participating.’

Ah, so actually, ‘if they crash out of next season’s group stage’ without winning any or indeed many games, they will still earn less than they picked up from actually winning the Europa League? This really doesn’t sound like a £140M JACKPOT PRIZE’ at all.

‘If Arsenal were to replicate their Europa League group stage record of five wins and one draw from this season in next season’s Champions League, they would add another £21m.’

Right, now we’re edging into the realms of fantasy.

There is more. So much more. After reading all of the numbers, it turns out that Arsenal’s potential European income is something like: