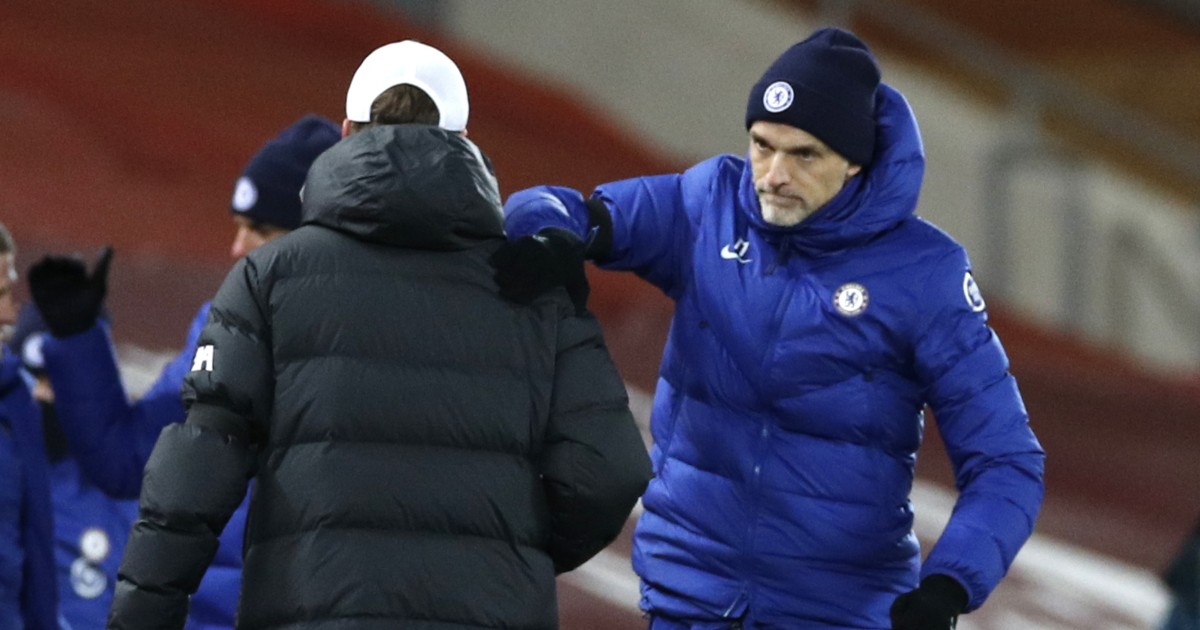 Michael Owen at least acknowledges his Liverpool ‘theory’ is ‘wild’. For one man, Chelsea’s win brought Sam Allardyce and Sean Dyche to mind.

Quick question
Is Roman Abramovich still ‘the man who shot Bambi’ and ‘shredded a club desire of nurturing youth’ with the ‘shameful dismissal’ of Frank Lampard? It didn’t particularly feel like it then. It certainly doesn’t now.

Chelsea smile
Henry Winter makes no mention of the Chelsea owner in his match report for The Times, which is absolutely fair enough. It would be quite strange if he had.

He does, however, declare that ‘Tuchel’s Chelsea appear to be taking shape’. Which is his way of saying they are unbeaten in ten games since his appointment, that only Manchester City are in better form and that they have now beaten Tottenham, Atletico Madrid and Liverpool under the German.

Oh, they ‘appear to be taking shape’ alright.

They also ‘looked a team well organised, knowing each other well’ and ‘confident’. This despite his predecessor failing because ‘the influx of new players this season arguably complicated his task’, while he ‘had to deal with all the politics at Chelsea, the power of certain players, especially those not making the starting line-up’.

It turns out that managing a big but really quite excellent squad is actually fun if you know how to/are good enough to do it.

‘Tuchel, it is expected, will pick the bigger names. He’ll go for results.’

‘Tuchel had better not mess Mount around.’

Route of all evil
Over at the Daily Mail, Martin Samuel weirdly wants to frame this as a sort of victory for route-one football. He watched Chelsea beat Liverpool in pretty impressive fashion but actually saw the potential to crowbar in some national rhetoric.

‘It is amusing, really, how unselfconscious foreign coaches can be about direct football. Sean Dyche or Sam Allardyce caught giving similar orders would be decried as dinosaurs. Tuchel arrives with none of that baggage. When he tells Chelsea to go long, he does so without moral dilemma.’

Sean Dyche or Sam Allardyce playing ‘direct football’ are praised providing it works. The same can be said for pretty much any tactic. Plus Chelsea played 57 long balls to Liverpool’s 56. The losing team were every bit as ‘route one’ as the side that beat them. It’s just that one team did it so very much better.

Also, there is a subtle difference between playing ‘direct football’ for 90 minutes and using it as one of many approaches in the same game. As Samuel says, Chelsea ‘can still mess it about at the back with the best of them’ and ‘were very brave in intricately working a way out of defence’.

So why suggest they relied pretty heavily on ‘a punt in behind a vulnerable Liverpool defence to Werner’? The word ‘punt’ implies something aimless and hopeful. N’Golo Kante and Jorginho tried 11 long passes between them and each were successful.

There is ‘putting it in the mixer’ and feeding off knockdowns and there is targeting a high defensive line featuring an inexperienced central defensive partnership that is susceptible to pace. It feels as though Tuchel did a little more of the latter, really.

“Mo Salah is the penalty taker in this team, and if [Mane] thinks he’s getting a chance to score he thinks, “well I’m going to score, if I don’t stay on my feet, Mo Salah’s going to get another penalty. It might be a wild sort of theory, but the competitive nature of him and Mo Salah… we’ve seen them not passing to each other when one of them is in a much better position to the other. We’re seeing a little bit of selfishness, we’re seeing a little bit of disgruntled behaviour.”

‘A wild sort of theory’? That professional footballer Sadio Mane actively does not want to win penalties because teammate Mo Salah takes them and not him? Not at all. These two Liverpool players who have won the Champions League and Premier League together clearly despise each other to the extent they would rather lose than give the other an opportunity to score (if you ignore Salah’s excellent first-half pass that led to Mane’s air shot).

Case for the defence
Writes Andy Dunn in the Daily Mirror:

‘If you had to choose one of these to back for a top four finish, it would be Thomas Tuchel’s team, particularly as Liverpool’s issues at the back continue.

‘People have stopped totting up the number of central defensive combinations tried by Klopp this season.

‘Suffice to say not many of them have inspired serious confidence.’

Not sure a 1-0 home defeat in which their first and only shot on target came in the 85th minute proved their ‘issues at the back’ more than it did expose their limitations in attack, to be honest.

Styles clash
‘Liverpool boss Klopp has always been a little bit ahead of Tuchel in terms of progress – he held both the Mainz and Borussia Dortmund jobs before Tuchel later took charge of the two German clubs.

‘Both managers are similar in style, tactics, and how they set their teams up with an attacking and high intensity philosophy’ – Simon Phillips, The Sun.

Four play
Andrew Dillon seems slightly confused in his match report for Fulham’s defeat to Tottenham in The Sun:

‘The faces of Son, Kane, Alli and Bale would have stared at them like the four horsemen of the Apocalypse with a sense of foreboding at Craven Cottage.

‘Mourinho witnessed the damage his forward line can do at West Ham recently.

‘His team lost 2-1 but Spurs treated the second half as a free-for-all with the most thrilling attack formation in the country leaving the normally resolute Hammers grey-haired.’

He meets his contractual tabloid obligations of calling them the ‘Fab Four’, but it is a little weird to suggest we saw ‘the damage’ that ‘the most thrilling attack formation in the country’ could wreak against ‘grey-haired’ West Ham, when they lost 2-1, shared a pitch together for 13 minutes and had no shots on target.

Unhelpful paragraph of the day
‘At times it feels as if officials, the joyless division, are just hunting opportunities to cancel out goals’ – Henry Winter, The Times.

Question the handball law. Lament the advent of VAR technology. But must we brand referees as ‘the joyless division’ and accuse them of ‘hunting opportunities’ to…implement the rules? We are not far removed from officials receiving actual death threats and this sort of thing probably doesn’t help.