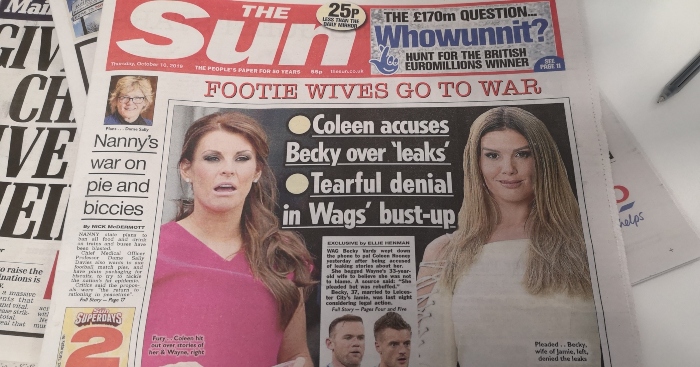 Now call Mediawatch naive – we have certainly been called far, far worse – but shouldn’t The Sun‘s actual front-page exclusive be that Rebekah Vardy is NOT the person responsible for the leaks from Coleen Rooney’s private Instagram account, if indeed that is the case? The Sun know. They absolutely know. They could bail out Vardy in an instant and they wouldn’t even have to reveal their actual source, but splash with ‘VAR FROM THE TRUTH’ or ‘WAGATHA GETS IT WRONG’ or whatever other nonsense constitutes a front-page headline in 2019.

The fact that The Sun have instead chosen to report the whole farrago as if it is absolutely not connected to The Sun is a) bizarre and b) only likely to add to the evidence against Vardy. If Mediawatch were Rebekah Vardy (and we were innocent) we would be utterly incensed at The Sun refusing to pull us out from under the bus.

Look at that front page; there is absolutely no indication that The Sun are involved at all. You would guess from the pics of crazy, gob-open Coleen and serene Rebekah that they are siding with the latter but otherwise, they are reporting the whole story as if they didn’t actually know the truth. It is really f***ing weird.

‘WAG Becky Vardy wept down the phone to pal Coleen Rooney yesterday after being accused of leaking stories about her.’

TO YOU! That’s not a detail; that should be absolutely essential in the telling of this story.

Oh and we don’t think she’s a ‘pal’ anymore.

‘She begged Wayne’s 33-year-old wife to believe she was not to blame. A source said: “She pleaded but was rebuffed.”‘

Mediawatch wonders which of the two people in that conversation might possibly be The Sun’s ‘source’. And obviously there’s no greater argument for Vardy not being The Sun’s source on Coleen Rooney stories than Vardy being the obvious source for this Coleen Rooney story.

On the inside pages, The Sun – now acknowledging that they have a part to play in this sorry tale – repeat over and over again that Rooney was asked to ‘verify the details’ of the three false stories she planted on Instagram before they printed the stories but were told ‘no comment’. Which is absolutely not the same as her ‘making it clear that she did not dispute the details’, by the way.

So The Sun consider themselves covered by the check calls, though that does not explain why those stories – now revealed to be entirely fabricated – are still available to view online. Here, here and here. Mediawatch can actually explain it with one word: Clicks.

‘An insider said: “Becky was really upset and pleaded with Coleen to believe she hasn’t gone behind her back.

‘”She really did want to smooth things over in the friendliest way possible and tried to get Coleen to see it from her point of view by staying calm.

‘”But as soon as the phone went down, Becky started mulling over their call and was furious about how she’d attempted to call her out publicly without speaking to her.

‘”When she posted her own message on social media, she did it to put the boot into Coleen. They will never be friends again after this.”‘

And that has definitely not come from Vardy herself, has it? It’s far more likely that she has spoken to an ‘insider’, told her all about all this ‘mulling’ and ‘fury’, and then that ‘insider’ has spoken to Ellie Henman of The Sun. That seems perfectly reasonable. Mediawatch is no Miss Marple – or even Coleen Rooney – but we would suggest that Vardy could quite easily find the leak in her own circle if she remembers to whom she said “as soon as the phone went down, I started mulling over the call and I was furious”. How many times and to how many people could she have possibly said those words on Wednesday?

Sun reporter Henman – who has also coincidentally broken several Rooney stories over the last year – writes literally hundreds of words on this story without once acknowledging that The Sun absolutely know if Vardy is indeed the ‘Phantom Storyteller’. Which leads us to believe that either a) she is absolutely guilty or b) they have decided that there is more mileage in this story running on and on, even when they could actually shut it down in an instant and still protect their actual source.

And the story is running on and on, with The Sun website publishing 15 stories on the row by 11am on Thursday morning, including one originally headlined ‘Rebekah Vardy slams Coleen Rooney for inviting vile trolls to bully her’ before somebody presumably realised that Vardy had not ‘slammed’ Rooney, who had not ‘invited vile trolls to bury her’. Obviously, that’s still the headline that appears on Google but we presume that is an unfortunate oversight.

Another Sun Online headline reads ‘Rebekah Vardy Twitter row – Coleen Rooney ‘used a professional MOLE-HUNTER’ to ‘catch her out’ over story leaks’, which is in itself bizarre because it claims to be repeating a story from The Times in which Matt Lawton reveals that they ‘received advice from a professional “leak hunter” before making the accusation’. Somehow ‘leak hunter’ has become ‘MOLE-HUNTER’, presumably because that makes Rooney sound a little more unhinged.

Our favourite line in that piece?

‘She had blocked all but Rebekah from her private Instagram account and posted a number of fictitious tales which then made it to the Press.’