Home Mediawatch Mediawatch comes to the defence of tabloid journalists… 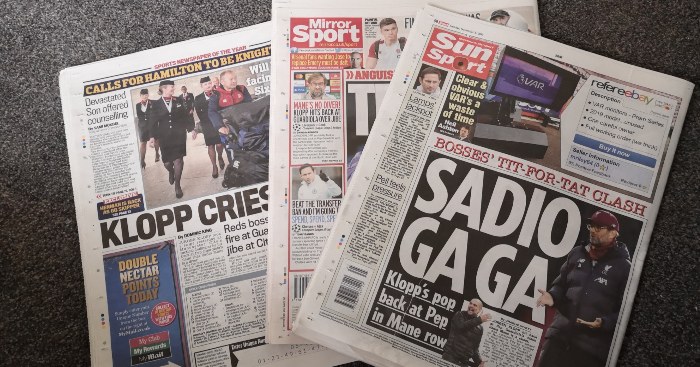 ‘F*** the pronunciation’ headline of the day
‘SADIO GAGA’ – The Sun’s back page finds its audience with a 35-year-old cultural reference and the wilfully incorrect pronunciation of a foreign name.

Mega edit
Also on the back page of The Sun is Andrew Dillon’s news story about Frank Lampard potentially having £150m to spend in January if Chelsea’s transfer ban is lifted.

You can turn to page 52 for the rest of the story and down there in the eighth paragraph we find this line:

‘Despite climbing to fourth in the Premier League with a clutch of home-grown players they are continually linked with new signings. Crystal Palace’s Wilfried Zaha, Leicester left-back Ben Chilwell and Germany striker Timo Werner are among the favourites.’

Dillon is clear; the headline is that Chelsea have money to spend. And helpfully, here is a list of three players who have previously been repeatedly linked with Chelsea.

By 9am, Dillon’s story is top of The Sun’s football homepage.

Well, kind of. Here’s the headline when put through the digital news machine:

Hmmm. That’s not exactly what he wrote.

Line up in line is all I remember
And as sure as night follows day, The Sun move that story on by telling us ‘How Chelsea could line up in January if transfer ban is lifted with £150m to spend on Zaha, Werner and Chilwell’.

Money, money, money…
And over in the Daily Mail, Amitai Whitehouse has an ‘exclusive’ that ‘CHELSEA have entered the race for Moussa Dembele’.

But frankly, f*** that, that’s old news by later on Tuesday morning on his own MailOnline website because…

‘Chelsea are ‘ready to splash out £150m on Wilfried Zaha, Ben Chilwell and Timo Werner in January’ if their transfer ban is lifted later this month.’

Oh Andrew Dillon, what have you done?

Handicap stakes
Mediawatch is just surprised that nobody managed to crowbar Manchester United into that Chelsea headline – especially as Werner was linked with Manchester United on Sunday and that is still being billed as ‘Timo Werner latest’ on the Manchester Evening News live blog on Tuesday morning.

But why talk about Werner when you can pretend that Jadon Sancho could possibly join United?

‘Real Madrid back in for Jadon Sancho in blow to Manchester United’s hopes of landing England star with Dortmund ready to sell him for more than £100m’ – Daily Mail.

We’re pretty sure that Manchester United have managed to ‘handicap’ themselves by being tenth in the Premier League and already ten points off the Champions League place that would surely be the absolute minimum requirement for Jadon Sancho’s next club.

Rum stuff
And for The Sun, the precious Manchester United gossip does not end there as they bring us the headline that ‘Man Utd chiefs prepared to back Solskjaer by pushing to sign £80m Declan Rice in January’.

Sam Morgan must be a slow reader; it apparently took him until Tuesday morning to get to the end of Goal‘s story from Friday night.

Why keep a dog and bark yourself?
Maybe we are wrong to be annoyed on his behalf, but surely it rankles a little with the Chief Football Writer of the Daily Mirror – who has spent over 25 years nurturing contacts at Arsenal – that the website of his own newspaper give his work (and that of his colleagues) pretty much exactly the same respect as a re-hash of gossip from just about anywhere else. The value placed on his contacts and knowledge appears to be pretty much negligible in 2019.

John Cross wrote on Sunday that Unai Emery is ‘facing a make-or-break month’ but that Arsenal ‘are determined to try and give Emery every chance to turn things around’ while denying that they have met with Jose Mourinho. The words ‘his job is not in immediate danger’ were used. All of which seems pretty clear.

But the problem with pretty clear is that it’s just not sexy. So by Tuesday morning we have an update:

Has a month passed already?

Well, no. Because obviously this is not a story from the Mirror’s Chief Football Writer with all his Arsenal contacts, but a tale lifted from French gossip enthusiasts Le10Sport, whose story is based on their ‘information’ that Mourinho’s agent Jorge Mendes is on good terms with Raul Sanllehi. Needless to say, that is absolutely not new information.

Now we are not averse to re-hashing gossip from questionable sources (unfortunately, cynicism alone does not pay the bills) but we do not employ one of the world’s foremost experts on the machinations at Arsenal. We don’t have a dog so we really do have to bark ourselves.

Friend or Defoe?
When not being an absolute bell-end in insinuating that Heung-min Son exaggerated his reaction to Andre Gomes’ devastating injury to avoid criticism, Stan Collymore is suggesting in the Daily Mirror that what Sheffield United now need is a ‘poacher of Jermain Defoe’s calibre’ as they could extraordinarily find themselves ‘safe’ if they start scoring more goals.

Yes, what the team in sixth – eight points clear of relegation – absolutely need right now is a striker who has scored five goals in his last 41 Premier League appearances.