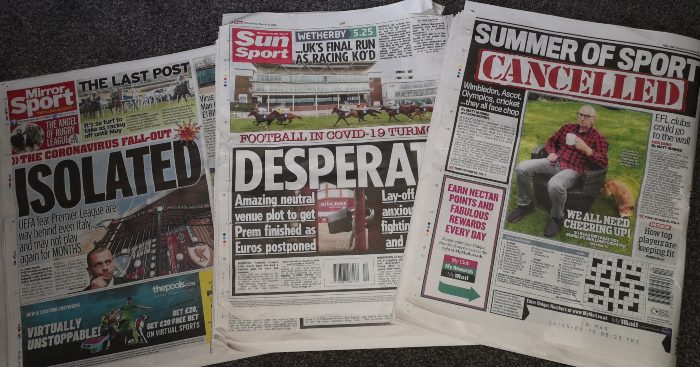 More, more, more
That The Sun’s back-page headline reads ‘DESPERATE’ seems apt as they come up with (sorry, ‘worried Premier League chiefs’ come up with) a ‘radical’ plan to complete the season that includes playing all 92 remaining games at neutral venues – possibly in the Midlands.

The issue of most Premier League squads not currently training because they have been directly affected by coronavirus (footballers can get coronavirus too, folks) is not really addressed – and the cynical might suggest that this ‘radical plan’ has been concocted out of thin air to create a back page – but a couple of lines screamed out to Mediawatch:

‘Prem clubs fear England could be the one country unable to fulfil their fixtures.’

Why? There is literally no reason to ‘fear’ this, particularly as both Italy and Spain – along with a whole host of European countries – are currently in total lockdown. Right now, England is probably the only country that could legally host a football match, thanks to the ‘advisory’ nature of government guidelines.

‘The League’s big guns spoke to Uefa chief Aleksander Ceferin as they have more matches left to play than the likes of Italy and Spain.’

Now this is simply untrue. And a quick check of league tables tells you exactly that.

The Premier League has 92 games left to play as all teams have played 28 or 29 games of a 38-game season.

La Liga has 110 games games left to play as all teams have played 27 games of a 38-game season.

It’s almost like somebody had to pretend the Premier League was special to sell the idea of a ‘radical’ plan that makes little to no sense.

ALL or nothing
And from there we get to ‘Premier League clubs rally to draw up emergency coronavirus plan which would see ‘ALL 92 remaining games broadcast live on TV and played behind closed doors in neutral venues in the Midlands’ from MailOnline.

We are particularly enjoying the ‘ALL’ as obviously, we presumed that the Premier League would organise this jamboree of football and then play just 87 or 88 of the remaining games just to piss off Liverpool.

Feel the fear
The idea that the Premier League is somehow in the worst of all the states is perpetuated on the back page of the Daily Mirror, which tells us that ‘UEFA fear Premier League are way behind even Italy…and may not play again for MONTHS’.

MONTHS, you say? Sorry, but who the hell thought for one second that we might be watching Premier League football again within WEEKS?

Complexities of life
The Sun’s Andrew Dillon is clearly not a man who frequents a gym as he describes Arsenal going to ‘extraordinary lengths’ to make sure their footballers stay fit by delivering ‘complex kit’ to their homes.

And what is this ‘complex kit’? Bench pressing machines and treadmills. Who knew that so many of us had complex kit in the garage?

The real news
‘Cristiano Ronaldo soaks up the sun in coronavirus isolation as girlfriend goes shopping.’

And that, ladies and gentlemen, is the biggest story in ‘football’ on Wednesday morning, according to the Mirror website.

‘Cristiano Ronaldo looked downbeat as he was spotted self-isolating from coronavirus as girlfriend Georgina Rodriguez went out shopping.’

‘Spotted’? You cannot be ‘spotted self-isolating’ unless you have a camera trained on their house at all times. Isn’t it reassuring that when the world goes to shit, somebody is still standing with a camera outside a celebrity’s house in the hope they might see a nipple of two.

Banner headline
The Daily Mail’s Ian Ladyman loves a chance to get seriously earnest but we cannot help but think he has mournfully wandered around Liverpool a little too early. Perhaps he is fearing a total lockdown will put an end to his mournful wandering.

Sorry, but we can’t get on board with the notion that ‘the Anfield streets were meant to be full of bunting and banners this week’. Surely they would have waited until they had actually, you know, won the Premier League; it was not likely until this weekend.

‘Those through the Old Trafford turnstiles early enough against Wolves on 1 February would have got a glimpse into what was to come from Fernandes even before kick off.

‘Minutes into the first warm-up ahead of his debut, Fernandes was in coaching mode, something that has become a feature of his early days in Manchester.

‘Fred, who has improved markedly since Fernandes joined, looked like a wide-eyed grandson listening to his Grandpa’s war tales as Fernandes explained in great deal what he wanted from the Brazilian.’

But Fred’s resurgence did not stop there.

‘Fred is scoring goals and slotting defence-splitting passes through at will.’

Which is one hell of a way to say that Fred scored twice against the ten men of Club Brugge with the game long won.

Oh and a pesky fact about those defence-splitting passes:

Minutes per chance created by Fred in the PL this season before Fernandes: 56.2

Minutes per chance created by Fred in the PL this season after Fernandes: 73.2

If anything, he’s getting shitter.

Nick Miller on the start of Berlusconi’s Milan

Miguel Delaney on how footballers are coping with coronavirus