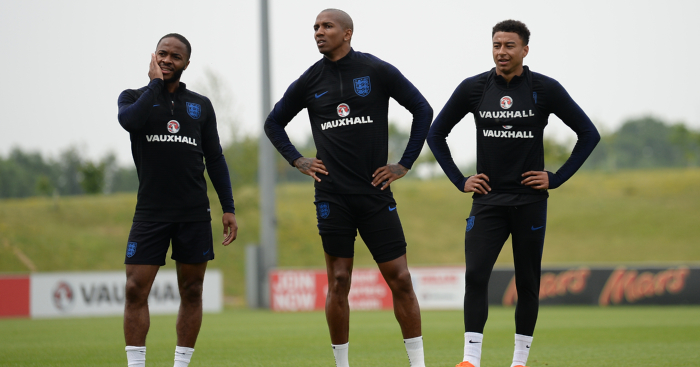 Sterling effort
You thought you’d heard the last of Raheem Sterling in the news this week, hadn’t you? You made the mistake of thinking Jeff Powell wouldn’t wade in for the Daily Mail.

His column begins by suggesting that ‘the moral majority are appalled’ by Sterling’s tattoo. Which is funny, because it felt like the exact opposite.

He then writes that everything ‘depends, it would seem, upon the prism through which you view the controversy’. Such as whether Sterling’s claim that the tattoo was in commemoration of his father should be believed, with some saying it was ‘a hastily conceived public relations concoction’.

‘Only Sterling himself knows the truth of that,’ says Powell. Because clearly he can’t be trusted not to lie about the death of his own father and his attempts to remember him.

‘What we can all be certain of is that the majority of the criticism has nothing to do with the colour of the skin which bears the tattoo, nor with some Machiavellian plot to wreck the England team,’ Powell adds, because who better to decide whether something is or isn’t racist than a old, middle-class white man?

‘The accusation that revulsion against the tattoo can only be rooted in racism is despicable. David Beckham and Paul Gascoigne are among those who have endured much worse in World Cup years past.’

Which roughly translates to: look, we clearly aren’t racist, we systematically targeted these white men at least two decades ago too.

The only problem is that the treatment Beckham and Gascoigne were subjected to by the press never became so serious and detrimental that they were then racially and physically abused as a direct consequence. Sterling was. And to absolve members of the media of blame for that is despicable.

‘But what Sterling cannot escape is that most of his detractors and his defenders alike have come to the same consensus. That he has made a mistake.’

Mediawatch must have missed that meeting.

‘Quite why he and his Manchester City paymasters are said to be consulting their lawyers is unclear.’

It might be something to do with persistently demonising coverage from The Sun and your own newspaper leading to Sky Sports News adding a word to Sterling’s statement to completely change the context. Something Sky Sports News later issued an apology for. Which is clearly what people do when they’ve done nothing wrong.

‘Furthermore, the rush to judgement came as much from those with a vested interest in England’s World Cup campaign as from the socially outraged.

‘The Football Association could not wait to accept Sterling’s explanation as ‘heart-warming.’ Will they ever learn?’

To do what? To trust the word of a footballer who offered clarification over manufactured controversy despite not being required to do so?

‘The majority of the football media hurried to report how pleasantly he gives interviews. Why they are so wary of calling him to account is beyond me. Given his rap sheet of previous indiscretions, they really have no way of knowing if he is as nice as the impression he gives in those situations.’

Is this a parody? Criticising members of the media for saying he’s nice? Saying they have failed to hold him ‘to account’? Suggesting it is simply an ‘impression’, a facade that he plays up to in interviews? Referring to his ‘rap sheet of previous indiscretions’? Jesus.

As an example of how ‘nice’ Sterling is, this is a young man who made a donation to the Grenfell Tower fund, who has helped fund education in Jamaica, who became an ambassador for a police charity to fight against crime and much, much more, as this attests to. All while thriving as a footballer despite being portrayed as a troublemaker. Sounds quite ‘nice’ to us.

The entire article – and that is a generous description – has been leading into three absolutely incredible paragraphs. Strap yourselves in:

‘What we can be more certain of is that he is aware of the youth culture in this country, in all its menacing complexities.

‘If he fails to realise the impact his actions can have on that impressionable and increasingly volatile community then at the very least he is a twerp.

‘Thus far there has been no apology from him for aggravating the public perception of rich and famous young footballers as a supercilious, self-serving shower.’

If The Sun doubled down and safeguarded against claims of racism by interviewing a black man on Tuesday, Powell has gone all in by the end of the week. Quite why ‘there has been no apology’ from a man who was said by Powell’s own paper to ‘represent the moral decay of our national game’ is beyond us. Sterling clearly felt an explanation of his incredibly personal motives behind a decision that has absolutely nothing to do with anyone else would suffice: How wrong he was.

The parting shot is that Powell says the current controversy surrounding Sterling ‘is of his own creation’. Because he criticised himself for buying his mum a new sink, for spending too much, for spending too little, for being a ‘footie idiot’ and a ‘love rat’, and for getting an as yet unfinished tattoo to remember his deceased father. Yes, he is definitely the problem.

‘Abramovich does not seem a man who will exist easily with failure. Yet Chelsea’s change of direction now makes them the smallest of the Big Six, with a ground capacity not far in excess of 40,000.’

The problem is that Samuel never really clarifies by what measure Chelsea have suddenly been demoted to this position. A vague argument about stadium size is offered, but a handy table inserted into the piece shows that while Chelsea have the seventh-biggest stadium of any Premier League club, West Ham’s London Stadium has a greater capacity than Manchester City’s Etihad Stadium and Anfield.

Are we supposed to pretend West Ham are ‘bigger’ than Liverpool and the current Premier League champions?

As excellent and consistent as Tottenham are, there are precious few metrics that prove they are currently a ‘bigger’ club than Chelsea. They finished above the Blues this season, but it was only the second time in six seasons they have done so.

My name is Geoff
‘England World Cup legend Sir Geoff Hurst is bracing himself for shocking news – he may actually be German!’ reads the first paragraph to a Daily Mirror story that is curiously without an author.

‘The hat-trick hero of England’s 4-2 win over West Germany in 1966 is set to undergo an AncestryDNA test after revealing a connection on his mother’s side.’

Oh, so he might just be a bit German? Not ‘fearing the Wurst’, as the headline suggests.

‘Sky Bet is working with Sir Geoff and Ancestry on his family history research, which includes a saliva analysis, to discover how close he was to being known by his German equivalent ‘Gottfried Hürst.’

‘He said: “Many years ago I heard of this story from my grandparents on my mother’s side that there was some connection with a German name, a German family called Blick.”‘

‘Some connection’ really does not equal ‘I am a German and you must now call me Gottfried Hürst’.

“It’s not something I made public, of course, because I’m not sure it would have gone down too well in this country!”

‘”But I’m pleased to let you know for the programme that the family name of Blick, way down on my mother’s side, is possibly there.”

From ‘some connection’ to ‘way down on my mother’s side’. Prepare the lederhosen and any other stereotypes.

‘Sky Bet’s Sandro Di Michele said: “It would be the biggest shock of all for English football if Sir Geoff is revealed to be German.’

It would be the mildest shock on a quiet Friday, fella.

The Khan before the storm

‘England’s backroom World Cup staff took advantage of a players’ day off by getting haircuts. Three barbers were brought in from London to the Grove hotel outside Watford to tidy up the FA personnel. Despite the £600m on offer from Shahid Khan to buy Wembley and boost the FA coffers, each member of staff had to pay £25 for their trim.’

Because Shahid Khan has bid £600m to buy Wembley, not to pay for the haircuts of England’s coaching team.

Bale out
Also from Charlie Sale in his Daily Mail column:

‘Reshmin Chowdhury of BT Sport and talkSPORT super irritant Ian Abrahams did not impress colleagues by having selfies taken with Gareth Bale after the Champions League final while supposedly working.’

To be fair, they should be impressed: Ian Abrahams managed to get a selfie with Gareth Bale after the Champions League final despite working thousands of miles away at Wembley for the Championship play-off final.

Headline of the day
‘I bet that you’d look good on Zidane’s floor…’ – The Sun.

Recommended reading of the day
Sid Lowe on Zinedine Zidane.