Home All The News Mediawatch: Did hooligans sing ‘Drunken Sailor’ in the ’80s? 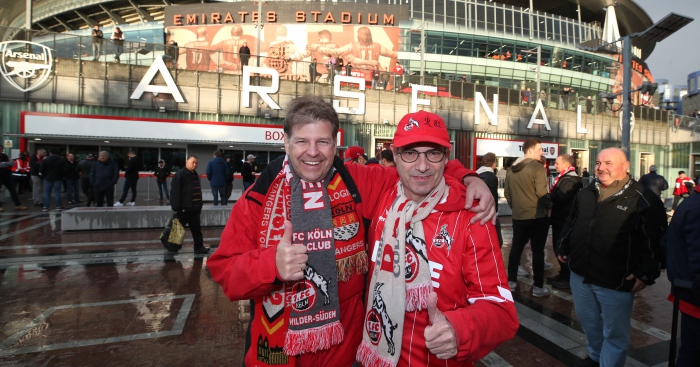 On the same page
‘Fear and fire as Cologne fans storm the Emirates’ – Daily Mail.

‘IT’S ALL GUN OFF’ say The Sun, on the ‘Europa League meltdown’.

‘Fear and fire’? Four arrests were made.

Arrested development
Of course, there is no hiding that the sight of a near 20,000-strong Cologne support would intimidate many an individual. And those who were actually at the game can clearly offer a far better perspective than those who followed it via social media.

John Cross was one such man at the heart of the action, and he relayed the evening’s events to the Daily Mirror.

Cross makes many salient points about ‘genuine security and safety fears’, adding that visiting fans were ‘completely out of control’ at times, and that the ‘party quickly turned nasty’.

Considering the game was almost called off and kick-off was eventually pushed back by an hour, it is also not a considerable stretch to describe this as a ‘bad night for European football’. Cross is also absolutely right that both Arsenal and Cologne will face a UEFA investigation over their lack of preparation. As of 11am on Friday morning, they have both been charged.

But to report this as a ‘night of shame’ that ‘was a sorry throwback to the shameful spectre of football’s 1980s hooligan days’ is something else.

To reiterate: Four arrests were made. These were not quite the football hooliganism scenes that led to, in admittedly the very worst cases, deaths three decades ago.

Kidding around
You know Cross is perhaps wide of the mark when he is not joined in his outrage by The Sun.

Dave Kidd admits that this was a largely ‘unique set of circumstances’ with regards to English football of late, but he adds that “there were no widespread scenes of violence outside the ground.

‘But this did not feel like the bad old days of hooliganism,’ he writes. ‘It did not even feel like the last night at Upton Park in 2016, when West Ham fans caused a similar delay to kick-off by bottling Manchester United’s team coach on a congested Green Street, with the visitors unable to reach the ground on time.

‘A walk around the outside of the Emirates shortly before the original kick-off time, before the turnstiles finally opened, simply showed thousands of English and German supporters shrugging their shoulders and asking each other politely what the hell was going on.’

Mail order
Not one to miss the party, the Daily Mail decide to go all Daily Mail, as is their wont. Because the ‘fear and fire’ back-page headline really wasn’t enough.

‘Thugs urinate in streets, make Nazi salutes and storm the turnstiles, forcing stadium into lockdown,’ reads the sub-headline in the newspaper. That all sounds rather serious.

Yet reading the actual story, it all becomes a little less clear. They refer to ‘reports of anti-social behaviour, including supporters urinating in the streets’. They then quote ITV political editor Robert Peston, who reported on ‘Nazi salutes’ being made by the Cologne fans.

That will be the same Cologne who are staunchly left wing and anti-fascist. Are you sure they weren’t just raising their arms like, y’know, football fans?

Winter is coming
Shall we leave it to Henry Winter of The Times to bring us the detailed review of the hooliganistic dread that descended upon north London on Thursday?

‘Thousands congregated off Oxford Street at 3pm, a few holding flares and throwing bottles, before briefly stopping traffic on the shopping thoroughfare. They then boarded coaches or the Tube and headed to the Emirates.’

‘The overwhelming mood was one of calm, acceptance of the delay, whatever the understandable frustration with the fans’ Cologne counterparts.’

‘Nothing could silence the Cologne hordes though, and they embarked on a raucous reworking of some classics, including Drunken Sailor.’

Briefly stopping traffic? Treating a football stadium to a rendition of Drunken Sailor? How long will UEFA ban German clubs from competition for?

Slight differences of opinion
‘Night of shame at the Emirates was a sorry throwback to the shameful spectre of football’s 1980s hooligan days’ – John Cross, Daily Mirror.

‘London was given a taste of what it feels like to have thousands of boisterous, tribal supporters descend on the city, but the scene was largely peaceful’ – Barney Ronay, The Guardian.

As ever, the truth probably lies in the middle ground.

Anarchy in the UK

On the Virg
With UEFA announcing that they had charged both Arsenal and Cologne for their parts in Thursday evening’s events, it would seem that there is little competition for football’s biggest story at Friday lunchtime.

Until you visit the Daily Mirror‘s website, and find that a video of a Liverpool fan imploring club owner John W Henry to sign Virgil van Dijk in January is top.

The Dunn thing
Elsewhere in the world of football, the perceptive Andy Dunn has noticed something: The Premier League does not have a winter break.

Before you proceed to yawn, let’s hear Dunn out in his Daily Mirror column, shall we?

”When Jose Mourinho claimed that, for Real, Barca and Bayern, the qualification stages were a “warm-up”, he was correct.

‘That is the really annoying thing about Mourinho, he is usually right about most things. He will be proved right when the knockout stages, mercifully, arrive in early February.

‘Mourinho believes the Premier League teams will have only a puncher’s chance if they come up against one of the elite at that point. Spot on.’

But midway through his article, Dunn realises that there is one flaw in his argument that a lack of a winter break restricts Premier League sides in comparison to their European counterparts: that English clubs fared quite well in the Champions League fairly recently.

But Dunn is having none of it. ‘You can point out the schedules were always like this and Liverpool, Manchester United and Chelsea all lifted the Champions League trophy over the last 13 seasons.

‘But, since the latest English win in 2012, the superpowers of Europe have become considerably stronger.’

Dunn finishes by claiming that ‘unless this perennial issue is finally addressed, the chances of them [English sides] going all the way will become slimmer and slimmer.’

Manchester City did reach the semi-finals two seasons ago. And Chelsea two seasons before that. Perhaps Barcelona and Real Madrid are just really good, whether or not they have Boxing Day off?

Lights, camera, distraction
Neil Ashton plays a similar tune in The Sun, claiming that ‘in recent years, actually winning the European Cup has been too much of a distraction for English teams’.

That is definitely why English clubs can’t beat Real Madrid. They’ve been too ‘distracted’. Probably by a lack of a winter break.

Crisis watch
Antonio Conte claimed the mantle earlier in the season. Arsene Wenger and Jurgen Klopp have both had it since. But who is the latest Premier League manager to be ‘facing his first crisis’?

Ronald Koeman, according to the Daily Mirror. Hurrah.

Recommended reading of the day
Martin Laurence on Bournemouth’s problem.