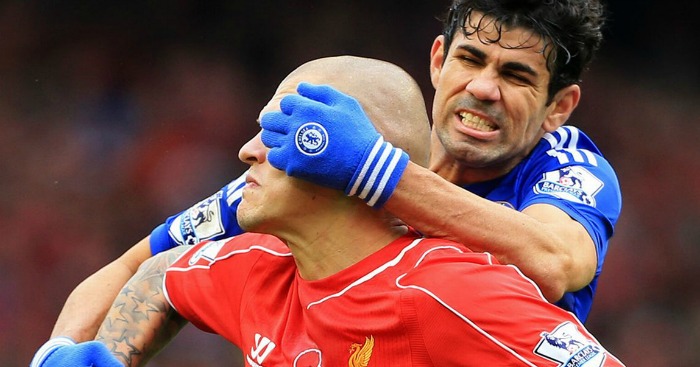 Hit the bottle
On Monday, it was reported that the Football Association would allow Gareth Southgate to issue any sanctions against Wayne Rooney or other England players for various alleged misdemeanours. As it emerges that none of the players had broken FA rules or ignored orders, that seemed completely appropriate. You suspect Southgate will have a quiet word in various ears to remind players of their responsibilities, and that will (mercifully) be that.

Almost every newspaper plays a straight bat on the story. The Daily Mirror, Guardian and Daily Express mention Southgate on the back page only to discuss the impending announcement of his permanent appointment, while The Times cover the ‘Southgate decides’ story, but calmly. The Daily Mail don’t even discuss Southgate until the fifth page of their sports section.

But what of The Sun, who ran the exclusives about Rooney, Lallana et al.? Do you think they will let it go? No.

‘FA chiefs have bottled it, leaving Gareth Southgate to punish Wayne Rooney and strip-club revellers Jordan Henderson and Adam Lallana,’ begins a story by Carl Long, bizarrely credited to Ian Tuckey by the time it hits the the website.

‘Greg Clarke and Martin Glenn could have imposed sanctions from the code [of conduct]. Instead they have shown themselves to be worthless by passing the buck to the new manager.’

Or, the players didn’t break any rules and therefore there are no FA sanctions to hand out. Have a go at Glenn and Clarke for plenty of things, but calling them ‘worthless’ for allowing Southgate to smooth over the issue feels like nothing more than faux outrage.

Doyouthinkhesaurus?
Burnley manager Sean Dyche has a complex. It’s a complex about foreign managers getting praise while he apparently gets nothing but hate.

In August, only a week after the Premier League had begun, Dyche fought his corner:

“The media could sometimes pay a little more respect to English managers who are doing great jobs at different clubs at varying levels. I think sometimes there’s not the right balance…if I had players running round a pitch it would be seen as a bit archaic and dinosaur-like. But if a big manager comes in and does it it’s deemed as toughening the environment and building a culture.”

At the time, Mediawatch reminded Dyche that he was creating a massive straw man. You’d struggle to find anyone who thinks that Dyche is a dinosaur, or anyone who didn’t think that Dyche was doing a fine job.

Now Dyche has been at it again. Writing in the Sunday Times, Burnley’s manager railed against the treatment of English managers:

“Talk about tactics all you want but what have the super-coaches really done? They’ve come in and said, ‘We’re going to run harder’. Klopp. Guardiola. Pochettino. Antonio Conte’s a mixed bag, sometimes absorbs, sometimes presses. You don’t have to be a European to know a team’s got to work hard. English managers were talking about it years ago.”

1. Has Jurgen Klopp really only told players to run harder? Or has he changed formation, the role and position of multiple players and made tough decisions on selling and leaving out others? Deliberately reducing another manager’s achievements beyond a reasonable point is exactly what you are accusing these mysterious anti-English forces of doing to you.

2. This is the ultimate straw man, Sean. Nobody is saying that Klopp or Guardiola invented pressing, merely that they are implementing that tactic very successfully. Not everything is a dig at the English, honest.

3. Mauricio Pochettino is not European.

4. YOU ARE EUROPEAN TOO, for goodness sake.

Still, good to see Dyche sticking to his beliefs by giving another British manager a leg up on Monday evening.

Wrighting that wrong
Writes Ian Wright in The Sun on Diego Costa:

‘I have a message to all those who say Diego Costa has finally got his game under control: It always was. There are plenty of people who reckon it’s all down to the fact he has calmed down. Yet to me, even when Costa was picking up yellow cards, he remained massively in control.

‘Yes, he landed in the referee’s notebook plenty of times. But he always knew how far to push it. He’d have picked up far more than a single red card in his time at Stamford Bridge if that wasn’t the case.’

Quite right Ian, you send them that message. You’ve always known, you’ve always backed him. When people were doubting Costa and saying his behaviour was detracting from his play, you knew different. Good on you.

It must have been a different Ian Wright – hey, it’s a common name – that said this exactly a year ago, then:

“I would sell him at the first opportunity I get for Costa. I’d sell him. As brilliant as he was in the first season, he’s playing a lot differently now. He’s antagonised at the moment. If I was a defender I would just keep talking to him, it takes him away from his game.

“When he first got here he was concentrated on scoring goals and being in the box, now he’s doing everything else. He’s outside the box and getting involved with people. At this moment, he’s the last centre forward Chelsea need.”

Chairman of the bored
In his Daily Mirror column, Stan Collymore is speaking his mind again. In fairness, that’s exactly what the header promises.

‘We’ve already had nine different Premier League leaders this season and, while some people would argue that it makes a great league, I don’t think it does. It’s exciting, yes, but to me that shows we have a lot of good teams and not many great ones. I have to say that it’s the first season in 13 or 14 years in the media where I’ve felt people are looking elsewhere for their entertainment.’

Collymore’s nine different leaders includes the example of Hull City, who won on the opening day to go top of the league before Manchester United went top the next day. Using that as indicative of a lack of great teams in the leagues is astounding.

That argument also completely loses its strength if you consider the league table at the end of every weekend, when every team has played the same number of games. Manchester United did it after the first weekend, then Manchester City took it from the second week until November 6. Liverpool then handed over to Chelsea this weekend. So, four leaders in three months.

Also, since when did competition for first place make leagues bad? You can’t have it both ways, decrying a league for being boring when one team dominates and then descrying it again when the lead changes hands.

Ch-ch-ch-ch-changes
Luckily, Mediawatch had a distant memory of Collymore suggesting some reforms for the Premier League a few years ago, and after some searching managed to find that Daily Mirror column from 2009. He’s not just a man to identify a problem, but provide the solution too:

‘I would actually like to see the Premier League comprised solely of the 20-25 clubs who have been the biggest and most successful sides in modern history,’ Collymore wrote. ‘I think those teams should form the top flight whether that be Leeds United or Newcastle United, and there would be no promotion or relegation, which would allow those teams to grow.

‘Then you would guarantee some of the world’s best derbies, like Sunderland v Newcastle, happening each season as well as other huge games like Leeds against Man United. It would make a pleasant change from watching some of the smaller clubs in the Premier League in recent times like Reading, Wigan and Bolton. Fans around the world want to see the huge games – not clashes involving clubs like Barnsley, Watford or Hull.

‘That would allow teams to attack without fear because no-one will be relegated. And it will crucially enable the Premier League to go on to the next level if we are to compete with La Liga and Serie A in Italy. The Football League would still function if you are a Wigan or a Notts County or a smaller club. These sides would do what they have done for most of their existence which is play in a league where you have a better chance of winning something.’

Truly a champion of the little guys.

He’s fair game
On Sunday, Saido Berahino revealed that he been suffering with symptoms of depression, struggling to regain his confidence and belief, which has in turn resulted in difficulty in regaining his fitness.

“This last year has been the most difficult of my career and it has left me short of the form and fitness required for the Premier League,” Berahino said. “I have never been a player who lacked confidence or a belief in himself but that has been where I have found myself and it has hit me hard. It has left me feeling depressed and struggling for focus which has made it even more difficult to regain full fitness. Constant speculation in the media doesn’t help and I have made this statement in the hope that it will respect my privacy and determination to get my career back on track.”

In The Sun on Tuesday, new columnist Dave Kidd has been irked by that last line:

‘SAIDO BERAHINO, the lesser-spotted West Brom striker, has issued a statement asking for privacy and an end to ‘constant’ media attention. What media attention? Most of us had entirely forgotten about him.’

Even if you think that all the above were newsworthy stories, and there is certainly an argument that they are, the fact that a young English player has now issued a statement to ask for privacy while he battles his personal issues might be better taken seriously. Rather than, y’know, using a piece of your national newspaper column to mock him.

Dumbing down
Mediawatch is all for fun. Hey, only yesterday we pulled out that bottle from the desk drawer and sat alone, contemplating football and life, life and football. What fun. Feel the fun.

Yet we don’t think it’s too curmudgeonly (what, us? never) to sigh at the dumbing down of football in the media, all in a bid for clicks. Take this from Sky Sports on Tuesday morning:

‘It might have been more than three weeks since Halloween, but there was a spooky sight for viewers watching the Monday Night Football between West Brom and Burnley. As Johann Berg Gudmundsson stepped up to take a corner during Sean Dyche’s side’s 4-0 defeat at The Hawthorns, many people spotted something peculiar in the background.

‘As two ballboys sat watching the Icelandic international preparing to take the set piece, it seemed the one on the left didn’t have a face. The unusual episode led to a barrage of tweets about the mysterious ballboy – particularly as the one on the right carried on conversing with him as normal.’

The last sentence floored Mediawatch, because it tries to add credence to the idea that it might actually have been a faceless boy.

‘On a night when little went right for visiting manager Dyche and his team, it was a light-hearted moment which would surely have made even the Burnley boss smile when he heard about it after the match.’

Aaand link it back to actual football. Textbook.

Reminder: One SporfLAD account is plenty enough to go round.

Laboured gag of the day
‘Riyad Mahrez was so red-hot last season that he was nominated for the Ballon D’Or – this season he can hardly hit a barn door’ – James Nursey, Daily Mirror. We didn’t say we didn’t like it.

Recommended reading of the day
Archie Rhind-Tutt with Oliver Burke.

Gregg Bakowski on footballers explaining how they do what they do.