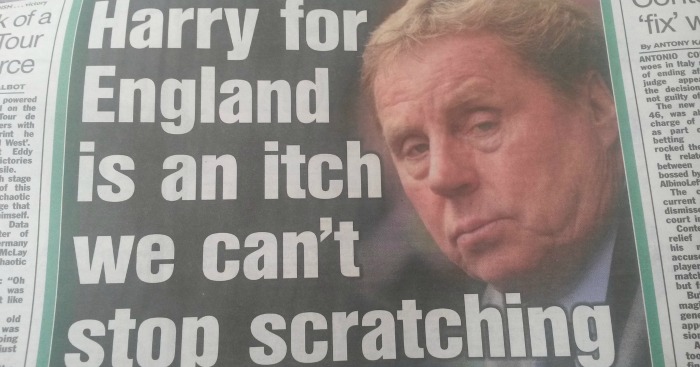 The itch is back
‘ENGLAND’S players want Arsene Wenger as the country’s next manager,’ wrote Neil Ashton in The Sun a whole week ago, claiming the Frenchman was the ‘overwhelming choice’ of the players.

Bizarre then that he now he writes that Harry Redknapp is ‘first choice among some of the players’. How many is ‘some’, Neil? Enough to build a whole bloody column around?

This latest Redknapp claim comes as Ashton writes that ‘Harry for England is an itch we can’t stop scratching’. We are pretty sure we could get some kind of lotion for that, but apparently ‘the country will never quite move on until we know for certain whether Redknapp could make a go of it in the biggest job of all’.

Speak for yourself, Neil; Mediawatch is quite content never knowing what would happen if Redknapp brought the facking red sauce back to the England hotel.

‘Redknapp simplifies the game, stripping down the tactics and sending players out in their preferred positions,’ writes Ashton.

Tell that to striker Eduardo Vargas, played out wide by Redknapp in his last game as a manager in English football – a 3-1 defeat to Stoke in February 2015 with a QPR side that must go down as one of the worst in Premier League history.

As for simplifying the game, how about bringing in Glenn Hoddle to switch to a three-man defence then changing it after 135 minutes when you realise that Steven Caulker, Richard Dunne and Rio Ferdinand do not combine to make a mobile defence?

England has 99 problems but an itch ain’t one.

Inside outside
Neil Ashton claims to bring us ‘THE INSIDE TRACK ON FOOTBALL’S BIG STORIES’ so Mediawatch is incredibly grateful that his ‘INSIDE TRACK’ on ‘FOOTBALL’S BIG STORY’ about John Salako has been sacked as a coach at Crystal Palace, the club Ashton supports, is that ‘the good guys – and Salako is one of them – always deserve a second chance’.

You simply can’t buy that kind of insight. Well, actually you can and it’s f***ing expensive.

Chapter and Merse
‘I’m backing Germany in this one and predicting Germany v Wales in the final. Who would have called that?’

Mediawatch; Mediawatch would have called that.

Apostrophes can be difficult
‘With a population of 330,000 people, the Scandinavians’s lion slaying exploits and excitable commentators have inspired the rest of Europe to adopt the nation as their second team’ – Daily Telegraph website.

Top of the class
Even if you have little time for Arsene Wenger’s managerial style, you have to admit that he ‘showed his class by consoling Ozil after Germany defeat‘. Sorry what?

Goodbye Seventies
Another day, another ‘joke’ straight from 1978 from the Daily Mirror’s betting man Derek McGovern:

‘Hoddle was sacked as England manager first time after saying people with disabilities for the sins of a former life. His views are surprising because, in my experience, it’s women who swallow the reincarnation line more easily – after all, nobody could get that bitter in one lifetime.’

Mirror, Mirror on the wall…
Think Antoine Griezmann was the star of the show in the Euro 2016 semi-final?

Liam Palmer had an absolute stormer in the Euro 2016 semi-final last night. David Prutton on the other hand… pic.twitter.com/lTiyupZys2

“I think his style of football will suit the Premier League more than the Spanish league.

“I remember when I first went to Inter Milan in Serie A and I was that kind of aggressive player and every time I made a tackle I was getting booked, that was frustrating.

“So Pogba now coming into a league where it is tough, where he can show what he’s all about, I think is a perfect fit for him and for Man United.”

A reminder now that Paul Ince joined Inter Milan in 1995. Oh, and Inter Milan do not play in the Spanish league.

Merseyside tunnel
When you pick up the paper copy of Daily Mirror (for such a thing still exists), you see a headline of ‘KLOPP’S CLEAR-OUT’ and a sub-headline of ‘Jurgen’s revolution sees NINE stars axed by Reds this summer’. A shame then that there are pictures of only EIGHT stars, including Sergi Canos, the ‘star’ who spent last season on loan at Brentford and has played nine first-team minutes for Liverpool. And including Jerome Sinclair, the ‘star’ who made two Premier League appearances as a substitute before turning down a new contract at Liverpool.

Thanks to today’s Mediawatch spotter Elliot. If you see anything that belongs on this page, mail us at theeditor@football365.com, putting ‘Mediawatch’ in the subject field.