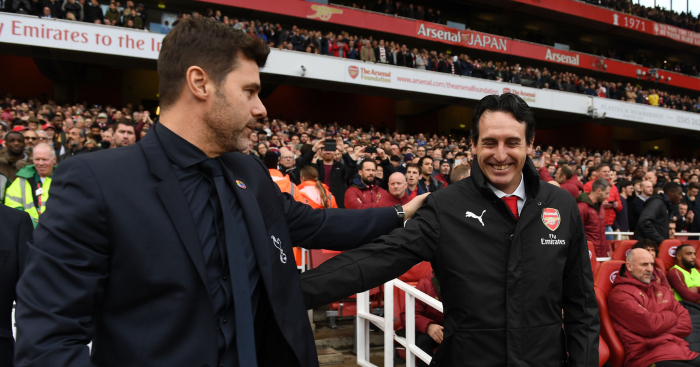 Imitation of life
When everybody who is anybody in football journalism is suggesting that you read a piece in the Irish Times from the wonderful Ken Early (we recommended it yesterday), what do you do if you work for The Sun and you have no new ideas of your own?

Well, you read that insightful piece, change a few of the words and publish it with a quick line saying that these are ‘illuminating stats highlighted by The Irish Times’, that’s what.

Huddle bunny
Arsenal have lost three games in a row so obviously Arsenal are in crisis. That they already have more points than last season and are 180 minutes from a European final is immaterial; THIS IS A CRISIS. And what better time than crisis time to give disgruntled employees a voice in the media?

Which is how we get to Matt Law in the Daily Telegraph writing that ‘some members of the current squad have been left confused by Emery’s team selections and set-up over Arsenal’s three-game losing run that has put his first season in charge on the brink of collapse’.

They are also just two points behind fourth and the only thing they might be on the brink of is a European final, but do carry on…

‘Sevilla went an entire league season without winning an away game under Emery and there is frustration that he worries too much about the opposition when his team play away from the Emirates.’

And what happened in that disastrous season when Sevilla ‘went an entire league season without winning an away game’? Well, they won the Europa League – beating Liverpool in the final – with a fresh-looking side, thus claiming a place in the Champions League the following season. We suspect Arsenal would take that scenario right now.

But Law has clearly missed the point when he writes that ‘his selection for the home defeat to Crystal Palace…was particularly bizarre’. It would not have mattered which players were on the pitch; it was all about the team talk.

This is seriously one of the oddest pieces we have ever read in the Daily Mirror from John Cross. And that’s saying something.

Now we will give him the benefit of the doubt when it comes to the headline; surely he did not write ‘Bizarre pre-match routine which has led to Arsenal losing three games in a row’. But what he did do is write an incredible piece that clearly gave somebody the idea for that headline.

‘Unai Emery used a member of support staff to give a rabble-rousing “team huddle” before a key game.

‘Ameesh Manek, who is primarily in charge of organising first team travel, did the pre-match ritual before the shock defeat to Crystal Palace which put them on a run of three consecutive defeats which could cost them a place in the top four.’

Right. So you actually are suggesting that this pre-match talk before the Palace game directly caused this three-match losing run. And there we were thinking that Arsenal have been defending like clowns when it turns out that it’s all the fault of this guy Ameesh Manek.

‘Manek is understood to have stood in the middle of a circle of players and shouted: “We are Arsenal” and “No-one comes to our home” with the players shouting in a football version of the All Blacks’ pre-match haka.’

It sounds a little cheesy but could those words have really prompted Shkodran Mustafi and Carl Jenkinson to be even shitter than usual? It seems unlikely.

‘Arsenal boss Emery has rotated the “team huddle” among various members of backroom and support staff during the season which may surprise fans that the last message multi-million pound players get before going out onto the pitch is from the travel manager or kitman.’

Ah, so this is not a new thing introduced to coincide with this little run of defeats? We obviously missed the articles where Cross praised the decision to rotate team huddles when Arsenal won seven Premier League games in a row or when they beat Manchester United, Chelsea and Arsenal at the Emirates. So it’s only a terrible idea when it doesn’t work? Or when Manek gets involved in a tunnel bust-up…

‘Arsenal have tried to play down the row but there is a theory that the referee may have been willing to take some “industrial language” from a player, manager or coach but not from a member of backroom staff.’

There is a theory. And it’s your theory, John.

‘It has also caused raised eyebrows among other members of coaching staff who believe Manek has overstepped the mark, should not have been in the tunnel and needs to be put back in his place amid some amusement that he should have been doing the huddle.’

Ah, so while Law’s source hails from ‘some members of the current squad’, Cross has had the nod from ‘other members of coaching staff’. It’s amazing how willing people are to dish the dirt when they are not playing/giving team talks.

‘Manek may have felt because he was involved pre-match that entitled him to have a say at half time despite having no role in the coaching set-up.’

He may. Or you may have just written a whole load of conjecture because somebody within Arsenal’s coaching set-up has had his nose put out of joint by the club’s Head of First Team Operations.

Manek’s LinkedIn profile says he is ‘an MBA qualified leader with 20 years Boardroom and Senior Management experience in the Sports, Hospitality and Financial Services industries specialising in sustainable organisational development’. Or – in the world of John Cross – he is ‘primarily in charge of organising first team travel’. Basically he’s a glorified coach driver. And he has now caused Arsenal’s season to collapse to the point where they are only 180 minutes from a European final.

When it was 62…
The Sun has quite the story on Tuesday morning. It’s new, it’s cutting edge, it’s forward-thinking.

‘SPURS were singing the praises of VAR as they overcame Manchester City to march into this season’s Champions League semi-finals.’

Well, that was a couple of weeks ago now. The news cycle has moved on by now, surely…

‘But had video assistant referees existed in 1962 they might have been the first English side to win the European Cup!’

Yes, it’s breaking news from 57 years ago. Only in The Sun, who have seemingly paid old hack Harry Harris (who once famously wrote the words ‘the legendary Jesus Christ’ in football copy for the Daily Mirror) to type out some quotes from his own ghost-written autobiography of Bill Nicholson.

Just wait until he spots that the ball might not have crossed the line in 1966.

Dear Stan….
Nobody will be surprised to see that Stan Collymore has been declaring Mauricio Pochettino the manager of the year – regardless of whether they win the Champions League. Though he does couch that sentiment rather when he admits in his Daily Mirror column that he could be ‘pipped’ if Pep Guardiola now wins the domestic Treble or Jurgen Klopp wins either the Premier League or Champions League. So Pochettino is the manager of the year unless Guardiola completes a 2/5 shot or Klopp delivers something currently offered by the bookies at around 7/5? That’s one hell of a hot take.

So basically Pochettino is the manager of the year if City win the Premier League and are then beaten in the FA Cup final by Watford, while Liverpool fail in the Champions League. By our reckoning that is a 7/1 shot.

All this love for Pochettino – now 180 minutes from a European final, remember – reminds us of a column Collymore wrote in January when Tottenham were knocked out of the FA Cup. Stan was ever so angry at the Tottenham manager’s disrespect for domestic cup competitions because…

‘It is a noble exercise him saying at the start of the season that Spurs’s priorities are the Premier League and the Champions League, but there is no way they are going to win them.’

‘It is good Poch talks up the big two trophies but there is no chance for Spurs which means they will probably end the season trophyless.’

Needless to say that Spurs have a far better chance of winning that impossible trophy than falling short and then somehow still emerging as the Premier League’s greatest achievers.

All rise
Mail on Sunday, November 2018: ‘David De Gea is set to become the highest-paid goalkeeper in the world by joining Paris St-Germain in the summer when his contract runs out at Manchester United. De Gea, 28, has been stalling on signing a new deal at Old Trafford in the knowledge that a bumper £300,000-a-week is on offer at PSG.’

The Sun, March 2019: ‘PARIS SAINT-GERMAIN will meet David De Gea’s wage demands of £350,000 a week. And the goalkeeper will quit Manchester United this summer if they do not match the offer.’

The Sun, April 2019: ‘PARIS SAINT-GERMAIN are plotting their revenge on Manchester United for knocking them out of the Champions League by offering David De Gea £400k-a-week to quit.’

The Daily Mirror, April 2019: ‘Mirror Sport understands PSG bosses are willing to give De Gea a long-term deal worth a staggering £450,000 a week over four years that will see his wages more than double.’

They probably should know who is in the Champions League semi-finals… pic.twitter.com/wdNTfGPJL5