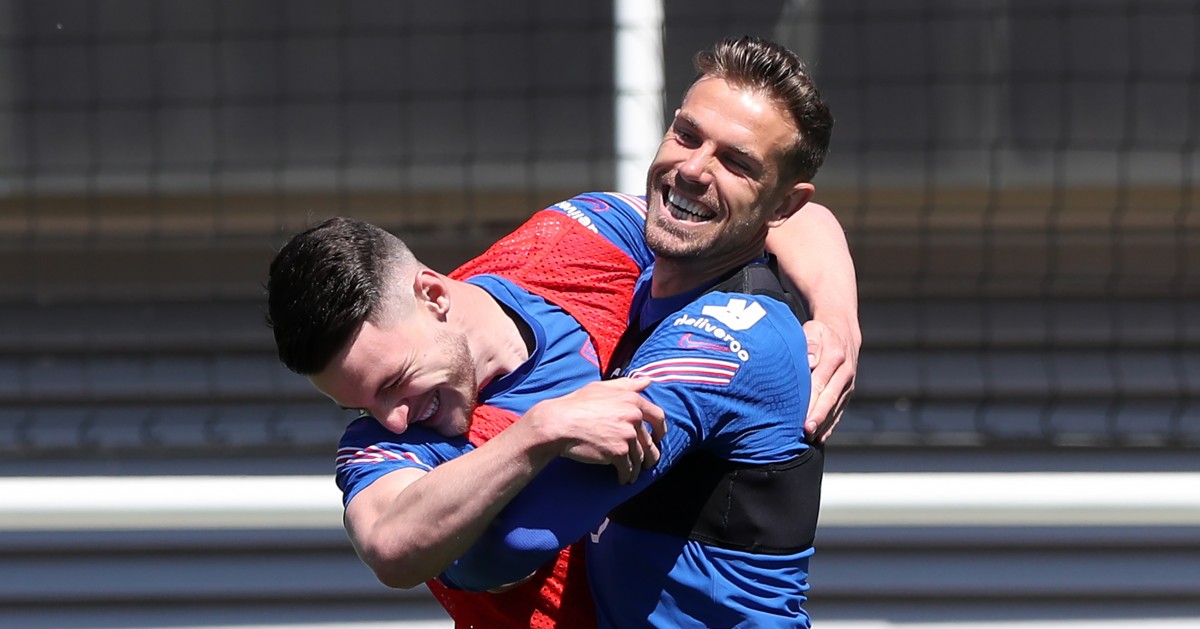 Declan Rice and Kalvin Phillips have started every game for England so far, which means Jordan Henderson surely has to come in for the final.

Just a couple more days of this…

The difference between ‘STREETWISE’ and ‘DARK ARTS’ appears to depend on which country you were born in. Glad to clear that up.

Thirteen month old baby
Still, that might be better than the The Sun pullout describing Roberto Mancini as ‘wacky’ because he…has some superstitions.

Kudos to them, by the way, for the exclusive that currently tops The Sun website. This is huge:

‘ITALY have suffered a coronavirus scare with three media staff testing positive at the team’s HQ just two days before their Euro 2020 final against England.’

Sake. Three people from broadcasters RAI test positive and a source describes the chance of infection to the squad or staff as “small” but you got your click so well bloody done.

Ster crazy
It is nice to see The Sun produce a double-page spread praising Raheem Sterling and documenting his journey to this point: from a difficult upbringing to a truly wonderful footballer and person.

It is uncomfortable that such features and positive treatment from the nation’s best-selling newspaper seem dependent on whether he scores some goals for his country or not, but that is another matter.

Two sentences stand out above all others, considering the platform in question:

‘Amid the sweat and toil, it appeared he was simply relishing the occasion as the final whistle neared.

‘And the internet has exploded in love for a player who had described himself as the [sic] #TheHatedOne in an Instagram post at Euro 2016.’

It’s funny you should mention that because here are a few snippets of how The Sun website reported on said story at the time:

‘A photo posted to Sterling’s 1.8million Instagram followers showed Stade Velodrome with a message from Sterling feeling sorry for himself.’

‘Fans tell ‘useless’ and ‘awful’ Three Lions midfielder to retire as his place in squad against Wales looks like it could be axed.’

‘This is not the first time Sterling has been slammed by fans. Liverpool fans called him a “snake” after his mega-money transfer to the Etihad last summer and Sterling referred to himself as the “Hated talent”. And it was on England duty to San Marino that he posted the infamous photo of himself next to fellow City signing Fabian Delph with a caption indicating they were snakes on a plane.’

And of course that article, published in June 2016, ends with a video from April 2015 of Sterling INHALING HIPPY CRACK. How strange that he might become #TheHatedOne when The Sun played the biggest part of anyone in his obscene vilification because he had a couple of bad games at Euro 2016, when every other England player was famously brilliant.

But now he is playing well so he is of use to this publication, whose apology is still not forthcoming. Or was he just ‘feeling sorry for himself’ all along?

Drop it like it’s hot
England are in the final of Euro 2020. They have been excellent, winning five matches and conceding a solitary goal from an excellent long-range free-kick. Six players have started every game. And the time to drop one of them is absolutely and obviously for the final to accommodate someone who has played 105 minutes so far.

‘It was a decisive move by Gareth Southgate to hook substitute Jack Grealish and send on Kieran Trippier, but not a bold one,’ writes Andy Dunn, Britain’s best Sports Writer for the Daily Mirror of a decision that would have been crucified and eviscerated by the media and supporters had it backfired. But nope, nothing ‘bold’ about that.

‘Here’s a bold one. Turn to a man who knows how to inspire on the biggest stage, but break the heart of a lieutenant who has served you faithfully for six games leading up to Sunday’s final.’

And here’s a bold response: Why?

Dunn does have that covered. Jordan Henderson, you see, has started two Champions League finals. He ‘spearheaded a club’s first successful title challenge in three decades’. He ‘is a big-game player’. He is ‘a proven leader’.

Declan Rice and Kalvin Phillips can’t say that. So dropping one of them ‘would be brutal…but it would be bold. And right’ despite them being ‘excellent throughout this tournament’ and ‘a crucial factor in England’s progress to the ultimate match’.

But not crucial to said match. Gotcha.

After all, Italy have ‘a different-level midfield’ and ‘someone will need to stop Jorginho pulling the strings’. Phillips is notoriously awful at man-marking; Rice has never faced players such as Luka Modric and Toni Kroos; Henderson is the only possible answer.

Some people might deem it relevant that Phillips has started ten of England’s last 11 games, in which they have won ten times and conceded twice. Others could feel it pertinent that Rice has started 21 of England’s 29 games since making his debut more than two years ago. A few may think their thriving central-midfield partnership is worth bearing in mind. One or two people can point out that Henderson last started a game for club in February and country in November.

It sounds like a change for the sake of being ‘bold’ rather than ‘sensible’ or ‘logical’.

Still not football news of the day
‘Meet Italy’s glam Wags, from a Sports Illustrated model to a criminology grad’ – The Sun website.

Woke up this morning feeling fine
On Monday they wheeled out David Mellor. On Wednesday they used Bel Mooney. So the Daily Mail have no choice but to invite Richard Littlejohn to pretend England reaching the Euro 2020 final was equivalent to victory against a global pandemic (32,551 new cases as of the latest update) on Friday.

‘There will be those who looked at the teeming crowds along Wembley Way, in Central London and across the country with horror.

‘All I could see was a nation casting off the shackles of Covid. Win or lose on Sunday, the game’s over for the merchants of doom who would keep us in lockdown for ever.’

Ha. Yeah. Those idiots trying to limit the amount of people dying or suffering if at all possible. Up yours!

‘More importantly, this was a reassertion of Englishness, a liberated people unashamed of our nationality.’

Oh do one. It was people celebrating reaching a first major international final in many of their lifetimes.

Is there any danger of talking about the actual football? Sadly, yes. Sorry we asked.

‘OK, so in recent years I’ve made no secret of the fact I’ve long since fallen out of love with the self-styled Beautiful Game.

‘How many times have I written that I hate everything about football, except the football? I can’t stand the cynical commercialism, the cheating, the spivvery, the bogus wokery…’

‘…from the ludicrous rainbow laces to taking the knee. But all that has been forgotten as England have progressed throughout this tournament.’

Nope. Not ‘forgotten’ whatsoever. The rainbow laces, the taking the knee, the general decency: it’s all very much an intrinsic part of why people love these players and this manager. They are excellent footballers but they are even better people, regardless of whether you only wish to recognise, celebrate and support the former.

Hop on the bandwagon if you absolutely must but good luck ignoring ‘the bogus wokery’ when that smattering of Wembley boos is drowned out by raucous cheers as players take the knee again ahead of a game you only wish to use to further your own warped agenda.