Home Mediawatch Can somebody tell the media that England won 1-0? 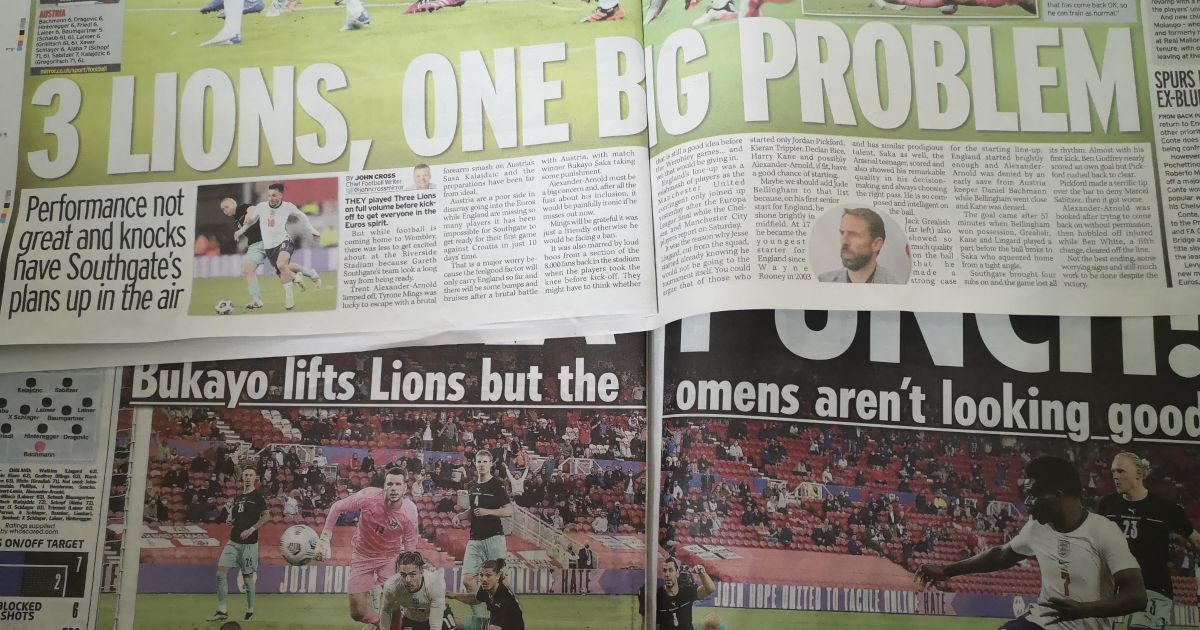 Trent! The Musical!
There is something utterly ridiculous about the back pages of the nation’s tabloids leading on ‘TRENT EUROS SCARE’ (The Sun) and ‘TAA-ARGH’ (Daily Mirror) when just two days before they were convinced he would not even be in the England squad.

Heaven knows, Kidd’s miserable now
England won on Wednesday night. And that’s something we feel we have to underline as we read The Sun in full doom merchant mode. Here’s Dave Kidd with his match report. And this is the actual opening line of a match report on a 1-0 win:

‘THERE is a feeling of ill-fate surrounding England ahead of these Euros.’

Is there? Is there? England have provided every member of a six-man PFA Young Player of the Year shortlist. Every member. Surely nobody thinks England are ready to win Euro 2020 but it feels exciting when the squad is so young and promising. Or at least we thought we were excited. We are apparently fools.

‘Even before the cruel injury which leaves Trent Alexander-Arnold facing elimination from the tournament, the omens have not been good.’

That still seems an odd way to begin a match report on a 1-0 win. And what the hell are these ‘omens’?

‘Boss Gareth Southgate’s preparations have lacked the clarity he enjoyed before the World Cup in Russia.’

Well, yes. Because 10 of his 26 players were involved in European finals and so are yet to join up with his squad. Is that about ‘omens’ or about England having a strong set of players who are involved in elite football?

‘He has named the injured Harry Maguire and Jordan Henderson in his 26-man squad. He has seen two warm-up matches deemed largely irrelevant due to almost half of his players having taken part in European finals.’

Southgate has indeed ‘named the injured Harry Maguire and Jordan Henderson in his 26-man squad’ but the key words there are ’26-man squad’; it gave him options. Oh and tell Jude Bellingham, Jack Grealish and Bukayo Saka that this game was ‘largely irrelevant’; they have undoubtedly strengthened their cases to be involved against Croatia.

‘Having tied himself in knots over England’s four world-class right-backs, especially Alexander-Arnold, he has now seen the Liverpool man forced off through an alarming thigh injury a day after his selection was confirmed.’

Yes, he has now seen his fourth-choice right-back forced off. COULD LIFE GET ANY WORSE? In reality, Alexander-Arnold was probably very, very close to the top of any ‘if we have to lose one player through injury…’ list.

‘England did at least achieve victory over Austria through Bukayo Saka’s winner.’

Oh. Now we sodding get there. In the sixth paragraph. They ‘did at least achieve victory’. And that really is kind of the point of football.

Woe, woe, woe your boat
Elsewhere in The Sun, Charlie Wyett is warning that a partnership of Tyrone Mings and Conor Coady ‘is not a pairing which would take a team deep into a major tournament’.

It’s literally a partnership that would never play in a major tournament. 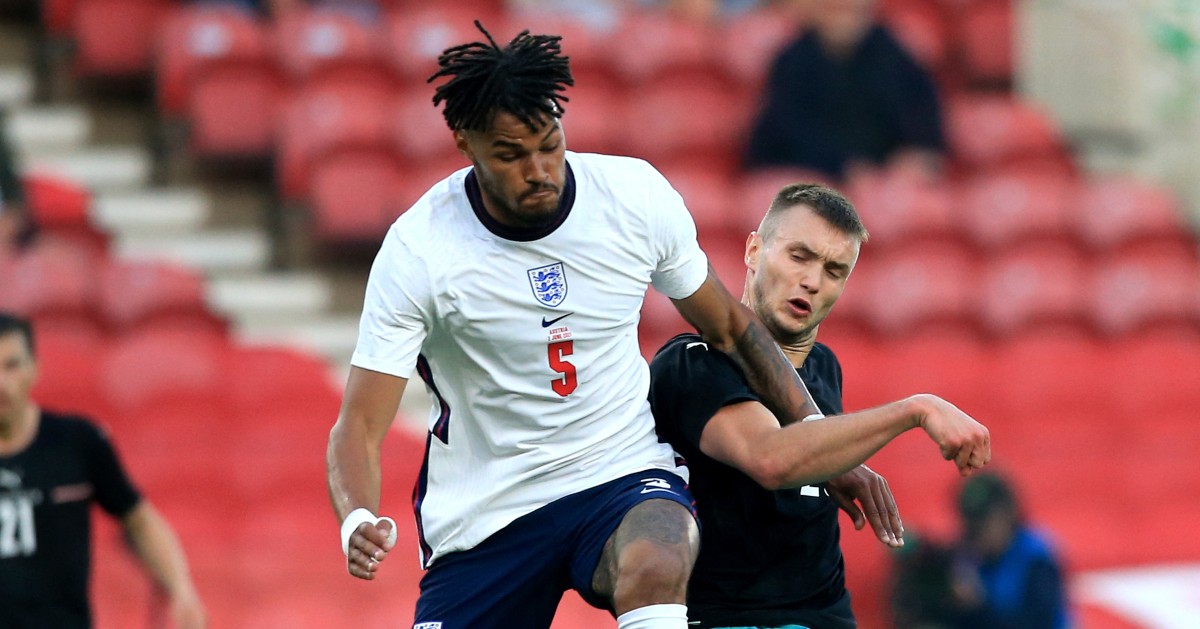 Guess who?
By 11am this was the lead story on The Sun website football page:

Because why write about football when you can just look on Twitter?

Oh dear, what can the matter be?
In the Daily Mirror, John Cross is only a little cheerier – though the headline of ‘3 LIONS, ONE BIG PROBLEM’ really might be the most miserable way of announcing a 1-0 victory we have ever had the misfortune to read.

We never actually get to the identity of the ‘one big problem’, almost like it was just an attempt at a clever headline that was not based remotely on reality.

‘They played Three Lions on full volume before kick-off to get everyone in the Euros spirit.

‘But while football is coming home to Wembley, there was less to get excited about at the Riverside Stadium because Gareth Southgate’s team look a long way from being ready.’

When you say ‘Gareth Southgate’s team’, do you mean the one that played against Austria or the one that will play against Croatia in actual Euro 2020? Because those teams are about seven players apart. They’re not the same team.

‘Austria are a poor side in disarray going into the Euros while England are missing so many players it has been impossible for Southgate to get ready for their first game against Croatia in just ten days’ time.’

Exactly. And yet they still won 1-0 with what Cross calls ‘a mishmash of players’. Huzzah.

99 problems
It turns out England don’t just have one problem. Thanks Mirror website for taking a 1-0 win over Austria and running right into a wall.

Lord knows how many problems they have, but here are the five biggest.

Yes, however will England cope with potentially losing their fourth-choice right-back? Apparently, ‘it will be a major blow for Southgate if he is ruled out of the tournament’. Seriously, he wouldn’t have even been at the tournament if it was still a 23-man squad. Next.

‘Playing the seven players who were cut from the 33-man squad makes little sense at this stage. England would be better off using their warm-up games to get their tournament players up to speed, with a fairly lifeless performance against Austria only evidencing this further,’ it says here.

Did somebody miss the fact that ten England players were in European finals, two are injured, one was not risked after returning from his own injury and one was ill? It seems so.

Southgate literally had ten outfield players available from his 26-man squad. Unless he played Dominic Calvert-Lewin up front with Harry Kane and did not use a single substitute, he had no choice but to use the rest of his provisional squad.

‘The likes of Jadon Sancho and Kalvin Phillips, however, played no part in the match despite making the grade for the final squad.’

Because Sancho was ill and Phillips was not risked because of his shoulder injury. Google really is a tremendous tool.

He literally said after the game: “I am not concerned.”

They are never going to play as a central defensive pair for England again. That ‘problem’ was pretty easy to fix.

Finally, a genuine problem. But again, this is a 26-man squad and England have options. Oh and Henderson has actually only started two of England’s last nine games so excuse us if we are not quite at the prayer mat stage.