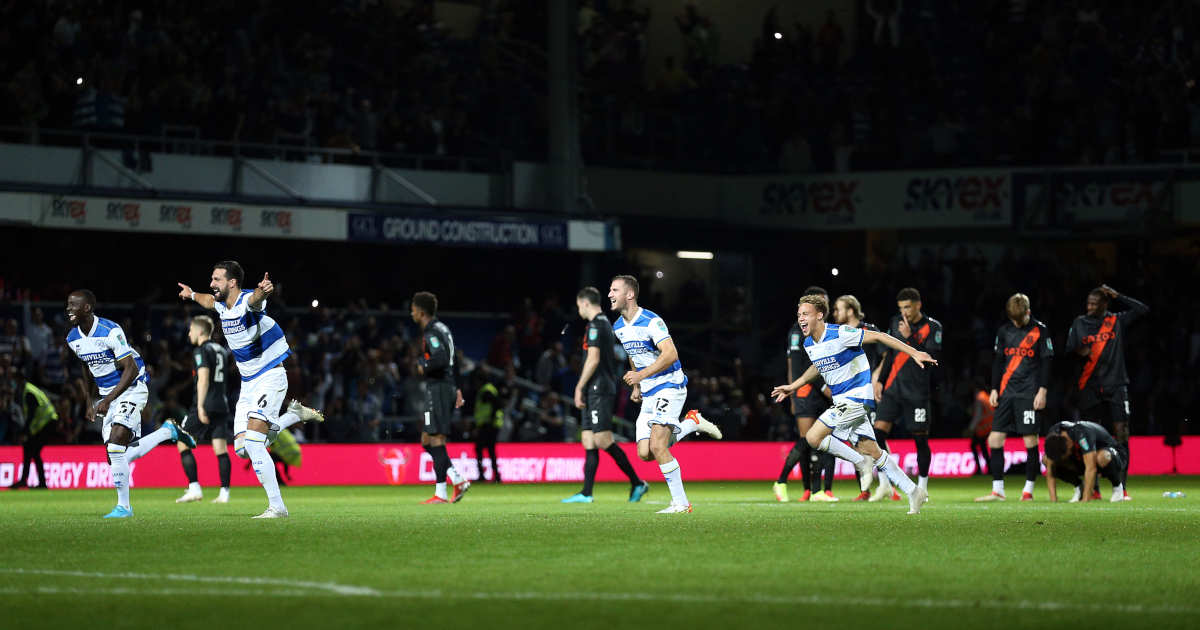 Everton are out of the League Cup, and there’s only one match that the media can possibly compare their elimination with.

Spare a thought this week for the beleaguered tabloid sports editor. The transfer window is closed and sealed until January, so even the juiciest of completely fabricated ‘rumours’ is likely to be ignored, while this week’s midweek fixture list doesn’t even allow them to hyper-focus on the same four or five celebrities as usual. Faced with such a paucity of football talk, Wednesday morning’s back pages are taken over by experimental sports called ‘golf’ and ‘boxing’.

Both of these new sports sound a little far-fetched to us. ‘Golf’ looks like nothing so much as ‘vertical outdoors snooker’, and involves thumping a very tiny ball hundreds of metres into an extremely tiny hole. And if you think that sounds far-fetched, ‘boxing’ consists of two largely naked people standing on a stage punching seven bells out of each other while a crowd encourage them to hit each other even harder and judges assess them on how well they’re beating each other up. It’ll never catch on.

Carabao Cup third round = as exciting as Champions League final
It’s difficult to get worked up abut the third round of the Carabao Cup, but the papers are going to have a go anyway. ‘Benitez is Dunne for’ cries Matthew Dunn in the Mirror and the Express (the sports pages of which may be most accurately described as ‘one paper for the price of two’, these days), following Everton’s defeat on penalty kicks to Queens Park Rangers.

‘Rafa Benitez will always be remembered on the red side of Merseyside for his penalty shootout victory against AC Milan in the 2005 Champions League final,’ writes Dunn, a slightly odd turn of phrase to use when we consider that the Liverpool goalkeeper Jerzy Dudek saved two penalties in said shoot-out, placing the Pole among the many Liverpool players who put in a heroic performance that night. But it’s the next line that is likely to be sending eyebrows through the roof across the nation.

‘But that had nowhere near the same level of drama.’

Now, Mediawatch could not bring itself to go hunting for an illegal stream of this much-anticipated fixture, but it seems like a bit of a stretch to be comparing a Carabao Cup third round match with one of the most dramatic Champions League finals in the entire history of the competition.

Those amongst us with long memories will probably remember Liverpool coming from three goals down to force a penalty shootout and then winning that, but apparently this had ‘nowhere near the level of drama’ of a League Cup match for which both managers made five changes from their previous match and which was played in front of a crowd of 12,888, meaning that Loftus Road was about one-third empty.

The ‘Dunne’ referred to in the headline is Jimmy Dunne, who scored the winning penalty for QPR, and Matt Dunn (no relation, presumably – their names are spelt differently) took some satisfaction in reminding readers that, ‘when Jimmy Dunne made no mistake, Everton and Benitez had not even made it to the fourth round of the EFL Cup’.

Somehow, Mediawatch doubts that Rafa will be that upset at his under-strength Everton team losing to another under-strength team in a one-third empty stadium. But we don’t doubt that the 2005 Champions League will be brought up every time he loses a cup game on penalties for the rest of his career.

Let’s be havin’ your 16-year old cultural references
Also in the Mirror/Express, madcap Mike Walters was at Carrow Road for Liverpool’s comfortable win against Norwich City, and he opens with a line which, well:

‘On a momentous night for teenage kicks at Letsby Avenue, Jurgen Klopp treated Liverpool fans to a glimpse of the future.’

Mediawatch already knows that tabloid newspapers, through the space constraints of physical media, had to pare down their language to the bare minimum – The Sun’s back-page headline for Everton’s defeat, for example, is the starkly minimalistic ‘Rafa Pen KO’, which we’d compare to Newspeak were it not for the fact that 1984 comparisons are so tiresome – but we do draw a line at the point at which their words stop making any sense whatsoever.

Okay, so ‘teenage kicks’ is an Undertones reference (Liverpool did play an extremely young team for this match), but… ‘Letsby Avenue’? At first, Mediwatch was left wondering why the punchline from that ancient joke about where a policeman lives would be used as the opening for a report on this particular match (no explanation is offered) and then it occurred to us… this is a Delia Smith reference, isn’t it?

To give you an idea of how up-to-date that reference is, Liverpool’s Kaide Gordon, who Walters reminds us was ‘still at primary school when Liverpool last won the League Cup’, was four months old when Delia made her fondly remembered exhortation to Norwich fans.

When sledging the Emirates isn’t sledging the Emirates
With huge shocks being thin on the ground – it doesn’t seem particularly likely that, for example, Stoke’s 3-1 win at Watford will be remembered – a certain amount of space is given over in a couple of papers to previewing Wednesday evening’s match between Arsenal and Wimbledon.

In The Sun, Andrew Dillon pulls that familiar trick of stripping the context from something that a player has said and adding a headline to it which paraphrases him in the most bantertastic way possible. The feature takes quotes from Wimbledon’s Alex Woodyard, and the headline reads:

Well, that should add a little spice to the match, shouldn’t it? What did he say? Did he say that the bronze bust of Herbert Chapman looks like the infamous statue of Cristiano Ronaldo? Did he suggest that they should replace their traditional clock with an LCD alarm clock, that those huge flags they wave behind the goal whenever Arsenal score are stupid, or that Gunnersaurus is a Nazi?

Of course he didn’t. Well, not quite. What he actually said was:

“For me, Wembley is the best stadium in the country. You can’t beat that. Then it would be Plough Lane and then the Emirates.

“And I mean that, in a way. I wish we had Arsenal at home. With our fans in, it really would be a special night. Our pitch at Plough Lane is just as good.

“The best bit will be turning up, getting to the changing rooms. walking on the pitch and hearing that roar – that is when it really does get to you.

“It was really difficult at first at Plough Lane because it was a building site, with no fans. The supporters are everything. If there were no fans at the Emirates, it would feel as if you had won an event to play there – or a team-building exercise.”

He might have mangled his words a little, but it doesn’t look much like Alex is sledging the Emirates. He seems to be saying that they’d have preferred a home draw for this knockout cup match, which doesn’t make for as exciting a headline as the implication that he believes the 9,000 capacity Plough Lane to be ‘better than’ the 60,000 capacity Emirates Stadium, and when he says that, ‘the best bit will be turning up, getting to the changing rooms. walking on the pitch and hearing that roar’, it’s almost possible to believe that he’s quite excited for this occasion.

The Daily Mail’s jab jeopardy
Finally, the main story on the back page of the Daily Mail is about Premier League players refusing to take part in a publicity campaign for the Covid-19 Vaccine. ‘IT’S JAB JEOPARDY’, screams their back page (it isn’t – there’s no significant jeopardy involved in taking the Covid-19 vaccine, and certainly not in comparison with what might happen should you not take it), but the accompanying article does mention that ‘Gareth Southgate released a video on behalf the NHS in July urging young people to get vaccinated.’

But when we turn inside to get the last couple of paragraphs of the story, these have their own headline: ‘GARETH’S JAB SHOCK’. It’s a bit garbled, all of this. One minute it’s the Premier League, then it’s the England manager Gareth Southgate, and then it’s deputy chief medical officer Jonathan Van-Tam. But the last word – the ‘shock’ refers to the amount of abuse he received after producing this video – goes to Gareth Southgate: “I’m probably going to keep out of that argument for the time being.”