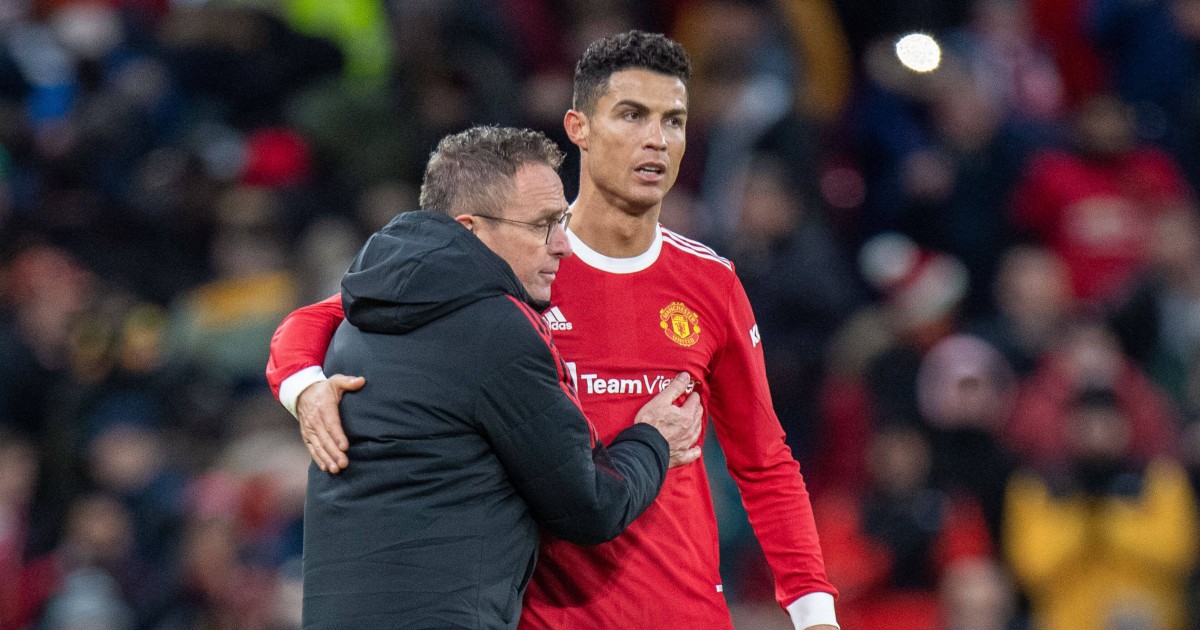 Liverpool have made the mistake of winning all their Champions League games, while Cristiano Ronaldo v Ralf Rangnick is still on the agenda.

Future proof
‘Ralf Rangnick has told Manchester United’s fringe players ‘prove to me you have a future here” is the first paragraph to a Neil Custis story in The Sun that the website laps up greedily. Here is their headline:

Alarm bells are already ringing, considering how fluid this Rangnick ‘quote’ is already. So let’s take a look at precisely what he said.

“Everyone has the chance to perform and present himself. That is why I am happy to give game time to quite a few of those players to see them under pressure in a Champions League game in front of 75,000 in a sold-out stadium. This is a perfect opportunity to get to know the players, like I did last Sunday against Palace. We have only had a week of training so far. With every training session, every opportunity to see them in competitive games, I will get to know them better.”

Not once does he say either “prove” or “future”. Mediawatch has no idea who or what Custis and the website is quoting, but it absolutely isn’t Ralf Rangnick.

Record breaker
The kickback against everyone that insisted Rangnick would drop Cristiano Ronaldo, force him to train with the reserves and sell him in January continues apace on Wednesday. Those silly, completely imaginary fools made entirely of straw.

Rio Ferdinand, speaking a couple of days after Rangnick DID adapt Man Utd tactics for Ronaldo and work around ‘superstar’ against Crystal Palace, might just be on to something.

The Daily Mirror is also at it with this beauty:

The best thing about those quotes is that they are exclusive, because Paul Ince doesn’t just drop such truth bombs willy or indeed nilly.

There’s that non-existent myth again. And the ‘observation’ which has completely undermined it? “They will work together, they’re gonna have to work together.”

Nailed it. Thank you for finally setting the record straight by saying a manager and player will have to cooperate to succeed, Paul.

Group activities
The Manchester United coverage, as it tends to, overshadows the actual football that took place on Tuesday evening. Among the teams in Champions League action were Liverpool, who rounded off a perfect group stage with a sixth victory from as many matches.

But the Daily Mirror website has some bad news:

Oh no. They’ve absolutely f**ked it by winning all of their games, the daft sods. Didn’t Divock Origi realise that only one of the previous seven teams who had won all their group matches went on to lift the Champions League in the same season when he put Liverpool ahead against Milan?

Not sure there is really much point in them – or Ajax, who also have a 100% record, or Bayern Munich, who would boast the same if they beat Barcelona on Wednesday night – even being in the draw for the knockouts.

Long shot
Ian Murtagh is shedding a spotlight on the sport’s biggest story in the Daily Mirror: do the Longstaff brothers have a chance of breaking through under Eddie Howe at Newcastle?

‘Brothers Sean and Matty Longstaff are facing uncertain futures as they look to kickstart their careers in the new year.

‘The Newcastle duo were the talk of football two years ago when Matty scored on his Toon debut against Manchester United with big brother Sean touted for an England call-up.’

‘The talk of football’?! They were just about the talk of Tyneside but it doesn’t feel like Spain, France, Italy or Germany were awash with opinions about Matty Longstaff in October 2019.

Que, Salah? Salah?
Even for The Sun website, this is pretty nonsensical, spurious stuff:

Now that ‘hint at transfer to Premier League rival’ is obviously nothing of the sort; he merely said he would “prefer to stay in the Premier League” when asked about interest from Barcelona. But who are these ‘five clubs Mo Salah could join’?

Manchester United, of course, for whom a deal would be ‘a major coup’.

Chelsea, as Salah clearly has ‘unfinished business’ and their lack of natural width ‘would almost-certainly change’ if he joined.

That hyphen is eye-wateringly painful.

Manchester City are predictably next, as Salah ‘would certainly be paid handsomely at the ultra-wealthy club’.

Then things get brilliantly ridiculous. Mo Salah to Newcastle is ‘absolutely possible’, even if he would take some ‘convincing’. Which is a slight understatement.

And finally there is Bayern Munich, a club known for spending lavishly on stellar signings.

Try the reveal
‘REVEALED: Why Watford star Emmanuel Dennis is not playing for Arsenal or Man Utd’ – The Sun website.

Is it because he’s contracted to Watford and not Arsenal or Manchester United?