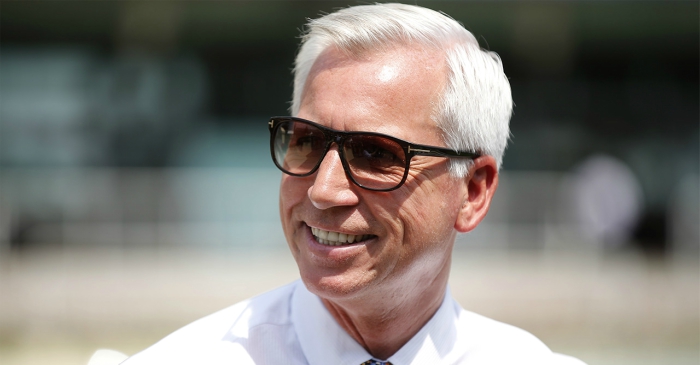 The man from Del Monte, he says yes
It might be a long time until we hear Alan Pardew’s humble tones again in press conferences. Chunky has fallen on his sword, presumably immediately blaming whoever put the sword underneath him rather than himself for jumping squarely onto the blade.

So, for old time’s sake, let us remember the quotes from his first press conference after being appointed at West Brom:

“When you look at the league table it’s quite congested and I don’t think that’s going to change. We need to get on a good run, get some points on the board and get ourselves in a position where we can start attacking the top 10 if possible.

“The most important fact is to win games. That’s the bottom line. Tony does that very well, but he does it in a different manner to me. My best teams, and I can only talk about myself, play on the front foot and try and put teams under pressure. They sometimes get a bloody nose in doing that.

“And that’s what I’ll deliver here at West Brom. Hopefully somewhere along that line we can get up to 1.5 or 1.7 points a game.”

When you’re the king you can do what you want. Unless it’s anything you promised.

Okay, one more
“When people ask me about England…well, if I was still at Newcastle, I’d be pretty keen on that England job. But, with all this here, I’m left thinking: ‘Why would I really want to leave this club now?’

“Obviously, I’d like to win trophies, and that’s very difficult even if we did come ever so close last season. But that isn’t the only way to measure success. Success can be a legacy. Maybe I can create one here so that, one day, people look back and say: ‘When Pardew was there that was a great period for the club.'” – Alan Pardew, October 2016.

How would I like to be remembered? Simply as the man who put a smile on the face of everyone he met.

And just because it’s him

Welcome back Pards! Perhaps things are changing a little – and it turns out British coaches know what they’re doing after all.

The inside track
The problem with manning a live blog specifically on one club every day is that it relies on things happening. So when things aren’t happening, you have to focus on the incidental, at best, or even meaningless.

Apropos of exactly that, ‘Could Daley Blind be staying at United after all?’ read the headline on the Manchester Evening News live blog on Manchester United on Tuesday morning.

The ‘story’ was that Blind had been included on the poster advertising Manchester United’s pre-season tour. We know, spicy stuff.

‘It has been a tough season for injured Daley Blind – who has not played for United since January 5 and has made just 16 appearances this season.

‘The Netherlands international was heavily linked with a deadline-day loan move to Roma earlier this year, but the deal never materialised and Blind has not played since, which is partly-owed to an ankle injury.

‘Eagle-eyed supporters may have noticed that Blind was one of four players splashed across United’s tour announcement picture alongside Ander Herrera, Alexis Sanchez and Juan Mata.’

And other supporters realised that him being on the poster makes sod all difference to him staying at the club.

As the MEN themselves even admit:

‘Given his lack of football this season – Blind has not played in the league since September – it would be a surprise if the was still at the club come August 31. That does not mean he will not initially travel on the pre-season tour, though, as the Netherlands are not involved at the World Cup.’

And as the same author of the live blog wrote on Tuesday morning for the MEN:

‘Untied (sic) are expected to jet out on Sunday, July 15 to Los Angeles with the squad made up of those players who are not involved in the World Cup, including Eric Bailly, Antonio Valencia and Alexis Sanchez, and those who exit the tournament in the early stages.’

So the actual news is that Blind will not be at the World Cup, and will therefore go on the pre-season tour with all the other Manchester United players who aren’t at the World Cup. And they knew that all along.

‘Could Daley Blind be staying at United after all?’ Don’t take the p*ss.

“I don’t know who will come in, I think that’s a real tough one. I’ve always liked Antonio Conte, I think he’s proved to be a great coach over the years.

“It’s going to be a loss to Chelsea, but I think the certain personnel they’ve lost at the club this year like I mentioned earlier has been a problem for them and I think that’s going to be their major obstacle.

“They’ve always gone for the big style manager who has achieved a lot in the game, it’s a real big ask for them of where they go next. It’s a tough call but they’ve got to get it right. Recruitment is everything, isn’t it. If you don’t get your recruitment right, you’re going to struggle.”

Not quite sure why Cascarino is so worried. After all, here’s what he said when Alan Pardew was in charge of Crystal Palace:

“There is one obvious candidate to be the new Chelsea manager and that is Alan Pardew. He is ready for the step up to join a team in the Champions League.

“He has the ability, the ego and the bravery. Pardew can handle any owner, even one as demanding as Roman Abramovich.”

Love it when a plan comes together.

‘I’ve also been quick to praise Guardiola for the things he has done well.’

Sure you have. It was a different Stan Collymore who wrote in November, when City had dropped two points in their first 13 games and led the Premier League by five points with a game in hand, that they were only dominating because this was ‘the worst quality league they have seen for a long time’.

And a different Stan Collymore who wrote in October that Guardiola had been ‘spoon fed lots of cash to get success’.

And a different Stan Collymore who wrote in January that Guardiola was ‘anaesthetising football’.

Exclusive-ish
‘Chelsea boost as Max Allegri will quit Juventus for Blues when Antonio Conte is sacked’ reads the headline on The Sun’s football homepage. It is labelled as an ‘exclusive’ from Neil Ashton, and also forms the back page of the print copy.

‘MAX ALLEGRI is ready to be Chelsea boss next season,’ the piece begins. ‘The Juventus chief has admitted he wants a Premier League job.

‘And he is all set to step in when fellow Italian Antonio Conte is sacked by Chelsea this summer. Asked of his plans, Allegri said: “Certainly I’ll go abroad. In Italy, finished.”‘

We’d be more inclined to take this as a Sun ‘exclusive’ were that quote not taken from an exclusive interview by the Daily Telegraph the previous day.

Cock Piss Partridge
Still, that Allegri story doesn’t get top billing on The Sun’s football homepage. Not when feature guru Jon Boon walks into the office and drops another sensation about a footballer’s cars. No wonder this guy used to work in Hollywood. Get it top of the site, if you know what’s good for you.

‘SunSport looks at one of football’s most extravagant Petrol Headers and introduces you to his exuberant world,’ the piece begins, with the weirdest spelling and capitalisation of ‘petrolhead’ Mediawatch has ever had the pleasure of encountering.

If you don’t read the following in the voice of Alan Partridge, you’re dead inside:

– ‘Being a nippy player, it’s no surprise Neymar has a penchant for Italian speed merchants Ferrari. Their 458 Italia model is an absolute beauty and comes with a hefty price tag.’

– ‘As flamboyant as he is on the pitch, he does love a comfortable drive.’

– ‘Before you were thinking Neymar had a preference for a more practical car, let us just shatter that illusion. His biggest gas guzzler is probably his Porsche Panamera Turbo.’

Not my words, Carol, the words of Top Gear Magazine.

Hokey-cokey
‘Gareth Southgate didn’t leave him [Alli] out of two friendly matches because he doesn’t rate him; he left him out because he does’ – Martin Samuel, Daily Mail.

Southgate must really like Glenn Murray; he wasn’t even picked in the squad.

Stating the bleeding obvious
‘Liverpool chance of Champions League qualification ‘better than 99 per cent’ – but winning it this season is much lower’ – Liverpool Echo.

And a little rant…
It might not seem to matter that much in the grand scheme of things, but the below is a tweet from Manchester United’s biggest unofficial Youtube channel actively misleading its followers (presumably Manchester United fans) in order to get them to click:

It is – and you can hate the phrase if you like – fake news. And these are the same people who will then claim a media ‘agenda’ against their club when any criticism comes its way.

(The actual story is a claim by Daniel Cutts for The Sun’s website that De Gea will sign a new deal. It does not make the paper.)

Former Tottenham striker Steffen Iversen now looks like a Gordon Ramsay super fan who has had surgery to look more like his idol. pic.twitter.com/LJ06eCKm8v

Who saw this tweet from our own Daniel Storey on Sunday, chuckled a little and decided that they wanted to read 250 words of semi-literate nonsense?

Recommended reading of the day
Matt Wilson on the end of Alan Pardew.