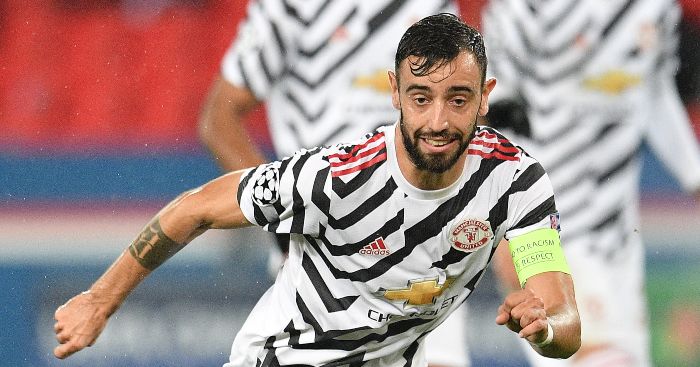 Bruno Fernandes was quite good on Tuesday as Manchester United won in Paris. A few of his teammates were certainly better but credit where it’s due: his first game as captain was a success.

It was not, however, further proof that he is the second coming of either a four-time Premier League-winning icon or one of the greatest players ever.

This one’s for you, BT Sport commentator Darren Fletcher.

Deciding not to randomly relinquish your penalty-taking duties in the middle of a game despite missing one a few days prior and having another saved but ordered to be re-taken – and scoring 21 in a row before then – really is astonishing. What a player.

Martin Blackburn of The Sun was equally impressed with Fernandes, otherwise known as Cristiano Cantona.

‘Leadership is something that comes naturally to the £67million midfielder – even though he is only 26.’

Because there has literally never been a single person to ever exhibit leadership abilities before the age of 30. Wait until he sees 21-year-old Declan Rice captaining West Ham.

The Sun website is also at it with this feature:

Moving quickly past that hyphen, we are told that Real Madrid will…

2) Sign both Fernandes and Paul Pogba from a Manchester United side presumably happy to sell their only two creative midfielders in one transfer window.

3) Randomly turn Marco Asensio into a guaranteed first-teamer despite him starting 12 La Liga games since January 2019.

That is one busy and definitely viable summer.

Quite why Real would even sign Pogba is a mystery, mind. The Daily Mail‘s Martin Samuel describes the Frenchman as someone ‘unprepared to pull his weight’ as an explanation for him starting the game on the bench.

What a strange way to refer to a player who provided the match-winning assist and had been a substitute in the previous game.

But did he take the decision not to start him well? Martin Blackburn of The Sun writes that ‘there was no attitude from Pogba despite him only making the bench again’. That he doesn’t also point out a lack of ‘attitude’ from fellow substitutes Donny van de Beek or Daniel James must simply be an oversight.

Martin Samuel also digs out Neymar in his match report. Not for being a bit rubbish, but for ‘actually walking away from the play as Rashford scored United’s winner’.

How dare a PSG forward not sprint back in the 87th minute to help his teammates prevent an excellent Marcus Rashford finish from 18 yards out?

‘Ferdinand tells Rashford what he needs to do to become world class’ – Daily Mirror website.

Is the advice to score more goals? Yes, yes it is.

The Sun seem conflicted as to whether Chelsea drawing at home to Europa League champions Sevilla, who held Barcelona at the Nou Camp earlier this month, beat Wolves, Manchester United and Inter Milan in Europe last season and drew twice with eventual finalists Liverpool in 2017, is a good result or not.

Dave Kidd admits ‘this would not have been a compelling advert for an expanded European Super League’. But he adds that the result ‘will have been welcome’ to Frank Lampard as Chelsea ‘cured their defensive incontinence’ and ‘looked more solid’, so this ‘should be considered a point gained rather than two lost’.

But Simon Phillips was unimpressed, suggesting they ‘looked afraid’, ‘in fear’ and crippled by ‘a lack of belief’ in an ‘uncomfortable’ formation.

‘These players need to drop the pressure and allow themselves to be creative and expressive,’ he concludes of a team whose Premier League results so far this season include two 3-3 draws, 4-0 and 3-1 wins and a 2-0 defeat.

More creativity and opportunities to be ‘expressive’ is definitely what one of the highest-scoring teams in England – with their poor defensive record – needs.

No prizes for guessing where this headline is from:

Manager ‘admits’ he will ‘manage’ one of his players. Whatever next?

The Daily Mirror ignores the two Champions League games featuring English sides on Tuesday evening to instead focus on Liverpool’s clash with Ajax on Wednesday. This story sits atop their website at lunchtime:

‘GOING DUTCH! 5 talking points from Liverpool training as Reds prepare for Amsterdam trip to take on Ajax in Champions League’

These ‘talking points’ – specifically ‘from Liverpool training’, remember – are:

3) Roberto Firmino ‘will be keen to get back amongst the goals’.

4) Nathaniel Phillips should be on the bench because there is literally no-one else.

5) Jake Cain simultaneously has ‘a potential chance’ to play and ‘is unlikely to feature’.

Never have I Evra

‘No’ – Mediawatch and probably everyone else.

‘Carragher hits back at Klopp over Liverpool transfer comments’

Reiterating agreement with the man is not ‘hitting back’.