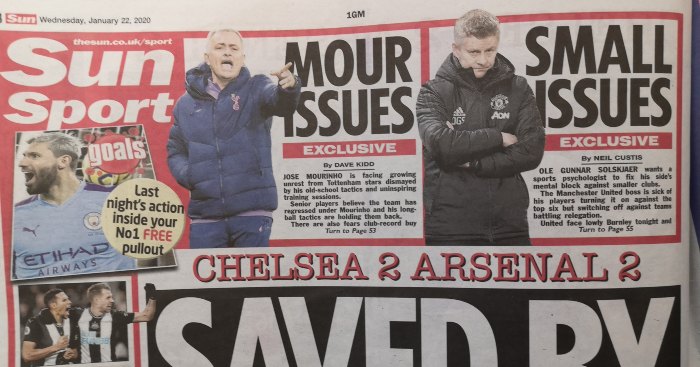 Name of the Rose
Because Mediawatch is in a generous mood, we have fixed Dave Kidd’s ‘exclusive’ piece about Jose Mourinho in The Sun.

Rose believes the team has regressed under Mourinho and his long-ball tactics are holding them back.

‘And SunSport understands Rose – who had initially welcomed the appointment of a manager with such a glowing CV — has grown frustrated at the Portuguese’s approach after just two months.

‘ Rose believes they are heading backwards after the innovative and popular Mauricio Pochettino.’

Frat pack bullies
The Sun’s other back-page exclusive is bizarre largely for its timing. Neil Custis has obviously been leaked the information that Ole Gunnar Solskjaer ‘wants a sports psychologist to fix his side’s mental block against smaller clubs’, which rather neatly puts the blame on the footballers rather than the manager or the club and simultaneously paints Solskjaer as a problem-solver. Bingo.

If we were cynical types, we might link this to Custis’ former Sun colleague Neil Ashton becoming a PR adviser at the club.

But obviously Ashton has more nous than to peddle this particular story when Manchester United have lost to Liverpool, Manchester City and Arsenal in their last eight games but have eased past Norwich, Burnley and Newcastle.

To add to her argument, Charlotte Duncker reports: ‘Back in the summer of 2018 Liverpool made an addition to their set up which was arguably bigger than the transfers of Alisson and Fabinho.’

It’s only ‘arguable’ that a throw-in coach is more important than one of the world’s best goalkeepers if you are a maniac.

Actually, it was ‘amid’ a 2-1 defeat to Braga that put Sporting Lisbon out of the cup.

And Mediawatch is simultaneously amused that this is the URL to that piece: manchester-united-transfers-news-liverpool-result-fernandes-maddison-grealish-latest-a9291451.html

Are Liverpool interested in a transfer for Philippe Coutinho? Are they balls. The ‘news’ is that ‘Bayern will not look to sign Coutinho permanently in the summer having not been suitably impressed with him since he joined the club’. So absolutely f*** all to do with Liverpool then? Reminder: He left two years ago.

A hint of truth
‘Dani Ceballos hints at Arsenal transfer exit after Gunners’ draw at Chelsea’ is the headline on a ‘news’ story on the Mirror website. While the Metro go with ‘Dani Ceballos drops Arsenal exit hint after Chelsea draw’.

“I’ll miss those goals with the left foot bro! You deserve all the good that happens to you.”

And what is he hinting? That ‘he will not be staying at Arsenal beyond the end of his season-long loan spell’.

So he is hinting – via the medium of a lovely message on Instagram – that he will abide by the terms of the actual transfer deal that Arsenal made with Real Madrid.

Come and see us when somebody/anybody says that the current European champions and consecutive finalists are not among their favourites to win the Champions League.

Wait one cotton-picking…
But that’s not the ‘MOST READ’ story on Mirror Football. That honour goes to this tale: ‘Fred waited for Alisson in Anfield tunnel after Liverpool’s win over Man Utd.’

Yes. Man waits for friend and international teammate to exchange pleasantries and shirts.

And bizarrely, not to fight him as clearly suggested by that incendiary headline.

And who is that headline quoting? For they are quote marks.

Nobody. Absolutely sodding nobody but themselves.