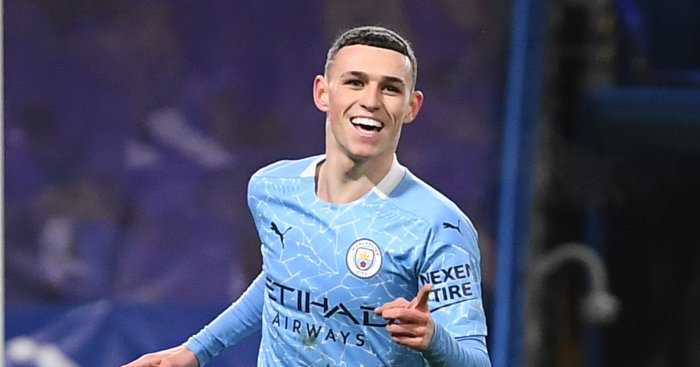 Don’t start
‘CHELSEA are enduring their worst-EVER start to a Premier League season in the Roman Abramovich era’ – The Sun.

It’s not just a mistake in the headline either. Anthony Chapman writes:

‘Chelsea have slipped to eighth in the table as a result, having gained only 26 points with seven wins from 17 games.

‘That is the worst start to a season during all 17 years of owner Abramovich’s Stamford Bridge reign.’

Simon says
Elsewhere in The Sun, Simon Phillips watched a different game at Stamford Bridge and Mediawatch is really happy for him.

‘Chelsea came out firing and took the game to a Covid-19 depleted City line up, and were unlucky not to get a penalty and things could have looked a lot different.’

Chelsea really did ‘come out firing’ by having two blocked shots and less of the ball at home to a team below them in the table and without numerous key players within the opening quarter of an hour.

As for that misfortune in Timo Werner not being awarded a spot-kick after being tackled by Rodri, every game ‘could have looked a lot different’ if penalties are randomly awarded for no real reason.

‘But Lampard’s team once again showed their complete lack of self-belief and timidity when City took the lead with pretty much their first attack of the game.’

Someone missed Kevin de Bruyne’s huge chance a couple of minutes prior. And the Raheem Sterling cross that quite luckily deflected into Edouard Mendy’s arms off an unwitting Thiago Silva. And Chelsea’s worst-EVER start to a Premier League season in the Roman Abramovich era.

To be Frank
‘When City’s first goal went in, Lampard threw his hands up in the air in a mixture of frustration and anger which would hardly help a group of Chelsea players so obviously struggling for confidence’ – John Cross, Daily Mirror.

That’s why Thiago Silva and Cesar Azpilicueta looked really old, Ben Chilwell decided to play Phil Foden onside for the second goal, N’Golo Kante was left as the only player within 70 yards of his own net attacking a free-kick at 2-0 down and Chelsea generally looked woeful: because Frank Lampard was ‘frustrated’ and ‘angry’.

You’d think these world, European and Premier League champions, almost each of them seasoned internationals, would not be so affected by their manager getting a bit annoyed about the concession of one goal.

Lamp shade
It’s little wonder that Lampard ‘threw his hands up in the air in a mixture of frustration and anger’ anyway. As Martin Samuel tells us, ‘his employer had spent close on £200million this summer’ and the return has not exactly been as planned.

2) Why is it only ‘his employer’ who spent that money when it’s Frank Lampard? Would any other manager be at least partially absolved of the blame in such a way?

Ask a simple question
Samuel pours praise on Phil Foden elsewhere in his match report. Manchester City ‘often appear mystifyingly reluctant to utilise’ the 20-year-old but he really was great.

‘Why doesn’t he start more often? Only Guardiola can answer that. This was only Foden’s second League start since defeating Arsenal on October 17, yet he was outstanding.’

Mediawatch can at least try to answer that: this might be a case of a manager quite sensibly managing one of his players. Foden has 1,851 Premier League career minutes and 18 starts in the competition and only exited his teenage years in May. Compare those numbers to legendary Premier League midfielders down the years at the same age and they’re really quite similar.

Guardiola certainly could play him more but it isn’t difficult to work out he might be trying to prevent career-long burnout in a compacted season.

Get your Phil
The same goes for the Daily Telegraph and Oliver Brown, discussing a 20-year-old with 91 senior first-team appearances for one of the best teams in Europe under a manager with historically high standards.

Leaky Leeds
The Daily Mail are full of pertinent questions. Ian Ladyman is here to ask: ‘If Marcelo Bielsa is so brilliant, then why are Leeds so leaky?’

Because his defence is often comprised of makeshift wingers and the senior centre-half he signed in the summer to replace an influential loanee has only played once?

Because it is possible to be ‘brilliant’ and also entirely flawed?

Because as many people are desperate to denigrate a promoted team that is comfortably mid-table than there are others who worship him?

‘There is a cult-like aura around Bielsa that means critical analysis of him is quickly shot down.’

Well no. There is a cult-like aura around Bielsa that means lazy analysis of him is quickly shot down. Like ‘what’s he won?’ and ‘he’s too defensively naive’. Critical analysis would be fair but is unfortunately scarce.

‘Bielsa’s unshakable self-belief is a valuable part of him. Creative free-thinkers rarely accept they are wrong.’

Sam Allardyce, on the other hand, is famously flexible and football is full of managers who abandon their entire 30-year coaching ethos because they’ve let a few goals in against considerably better teams.

Ladyman goes on to discuss a style that will ‘perhaps hold them back in terms of their Premier League position’. He then points out that ‘it is possible to play front-foot football while remembering how to defend’.

For a start, this is their first Premier League season in 16 years. By default this is already their best season in terms of league position in more than a decade and a half. Why are we contemplating whether a promoted team that is currently 12th is being ‘held back’ by the manager that brought them there?

But also, Leeds literally beat West Brom 5-0 less than a week ago, Burnley 1-0 a few days before that, while securing clean-sheet victories against Sheffield United, Aston Villa and Everton.

Most upsetting hyphen usage of the day
‘Jesse Lingard and Dan James have been on the fringes of Solskjaer’s first-team, and their futures remain up in-the-air’ – Daniel Cutts, The Sun.

Dirty Harry
That abomination comes from an exclusive about Ole Gunnar Solskjaer planning to ‘hold showdown talks with a number of his fringe Manchester United stars over his January transfer plans this coming week’.

It must take some absolutely remarkable contacts to discover and report that Sergio Romero, Phil Jones, Marcos Rojo, Jesse Lingard, Dan James and Brandon Williams, five of whom have not started a single Premier or Champions League game this season, will have their futures formally decided now the transfer window is open.

But the biggest piece of Manchester United transfer news on Monday comes from the Daily Mirror website, who bring us this groundbreaking story:

As for that URL, football/transfer-news/man-utd-transfer-grealish-maguire-23257467 is quite the effort.

Recommended reading of the day
Jonathan Wilson on Frank Lampard.