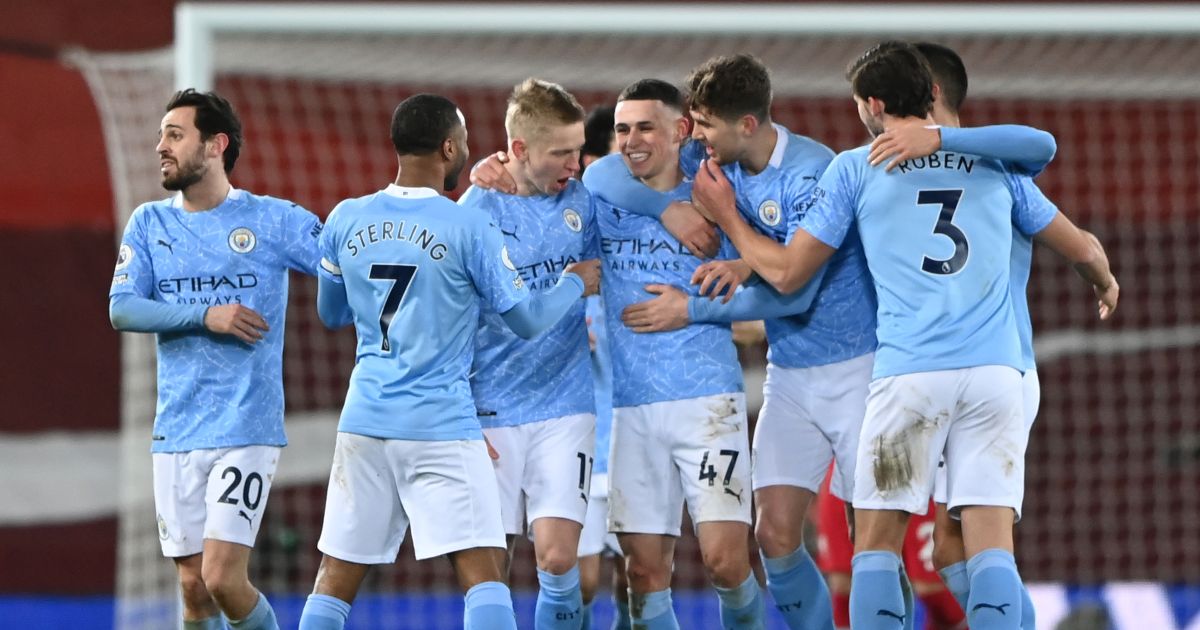 Groan-up
Phil Foden is a 20-year-old father of one. He has two Premier League winner’s medals and three England caps. He played the 102nd game of his club career on Sunday, scoring his 25th goal. The English champions could not cope with him at the weekend.

It is important to consider all of the above when reading Garth Crooks refer to him as ‘not ready to take over from the adults just yet’.

‘He is undoubtedly talented but at Manchester City, he is surrounded by better, more gifted players. How can he not flourish – he’s already gifted,’ says Crooks, as if that is ever a guarantee of success. ‘Gifted’ players have failed before, whether surrounded by ‘adults’ or not.

‘At the moment Foden, as was the case against Liverpool, puts the finishing touches to fine team performances, leaving the grown-ups such as Gundogan and Sterling and De Bruyne – when fit – to break the bow of the opposition,’ he adds in his BBC Sport team of the week, with no little condescension.

For someone who relies on the ‘grown-ups’ and ‘adults’ to give him a platform, that ain’t half bad.

Too many Crooks
Elsewhere in his column, Crooks:

1) Names a side with two actual centre-halves in a back three with Isaac Hayden, a midfield of Jesse Lingard, Bruno Fernandes, Gundogan and Foden and a front three of Kane, Sterling and Dominic Calvert-Lewin.

2) Claims that Brighton ‘proceeded to play Burnley off the park’ in a 1-1 draw that saw them have half the number of shots and fewer than three times as many efforts on target as their hosts.

3) Says Harry Kane ‘took his goal as if he was playing for his country,’ despite the Tottenham striker having failed to score in each of his last six England games.

Aside from that, it’s spot on.

Sugar cane
It’s quite the day for Kane, who perhaps didn’t expect to see his name atop the Daily Mirror website on Tuesday morning. Silly him for not expecting Stan Collymore to tell Liverpool to sign him.

Mind you, credit to the headline writer for shirking the obvious line of Collymore calling Roy Keane ‘out of order’ to instead focus on some throwaway paragraphs about investment at the end of his column, which includes the solitary mention of Kane:

‘It means that if City go out and buy Erling Haaland this summer then Liverpool must buy the next Robert Lewandowski or even put in a bid for Harry Kane.

‘What they can’t do is just say, ‘We have a really good XI, some youngsters coming through, and we can maintain our challenges that way’, because there are too many other teams with the money to make sure that won’t be the case.’

Although it probably bears repeating that Liverpool won their first English championship in 30 years on the back of a summer in which they signed two teenagers and a pair of back-up keepers, while champions City spent more than £120m on Rodri, Angelino and Joao Cancelo.

If that didn’t teach us that ‘spend as much money as everyone else’ is a bit reductive then nothing will.

All four one
‘And as for the assertion that they think their target is now the top four… I’ve not heard any Liverpool player say that,’ Collymore adds, before penning this in the very next paragraph:

‘The only thing I heard was Andy Robertson saying, ‘We’re in a race to get into the Champions League now’, and that’s just a fact.’

It’s also the same thing as saying their target is now the top four. Thank you kindly for Mediawatching yourself.

Oh, and you might not have heard a Liverpool player say it (even though you have), but actual Liverpool manager Jurgen Klopp called Champions League qualification “the most important thing” in mid-January and he literally referred to finishing in the top four as “of course our main target, that is clear” after the City defeat.

Get your Phil
Stan doesn’t mention him but it would be remiss of Mediawatch not to ask whether he still thinks Phil Foden should ‘demand a sit-down’ with Pep Guardiola and seek to leave Manchester City on a two-year loan. That was less than 12 months ago…

Norway, man
The Sun give their latest exclusive from Daniel Cutts both back-page and website-topping treatment on Tuesday morning. And it’s little wonder why when you read this doozy:

‘MANCHESTER UNITED will wait until the end of the season before opening contract talks with boss Ole Gunnar Solskjaer.’

Absolutely groundbreaking stuff. Team will see how they actually do come the end of the campaign before assessing the manager’s future.

He’s hardly going to leave in the middle of the sodding season, is he? Is this not just an obvious, straightforward and not all that newsworthy thing to do?

Ambition? Impossible
After all, according to Mark Irwin, Solskjaer ‘is clearly getting his excuses in early for another year of Old Trafford underachievement’.

His issue is with the Norwegian suggesting United ‘shouldn’t even be considered as title-chasers,’ which again is quite sensible when you consider precious few people tipped them to challenge in pre-season. Did anyone really expect them to be second in early February, five points behind the leaders? Or are you basing this particular ‘underachievement’ on the fact that This Is Manchester United and Fergie and 1999 and stuff?

‘They have not mounted a serious title challenge since Sir Alex Ferguson retired in 2013.’

We’ll take that as a yes.

Irwin then embarks on a burgeoning media trend: pretending that Bruno Fernandes has already had about enough of this sh*t.

‘The problem for United is that Bruno Fernandes – their one truly world-class player – clearly isn’t interested in second place.

‘He thought that he was signing for the biggest club in the world when he joined them from Sporting Lisbon in January last year.

‘But he is now rapidly realising that United’s ambitions don’t match his own – and is already starting to show his frustration.’

They were fifth when he joined last January, level on points with Tottenham and Wolves and one clear of Sheffield United. Their most recent result before signing him was a 2-0 home defeat to Burnley. Not sure he thought he was joining Barcelona 2009-11, to be honest. Plus they are now second, even without ‘ambitions’ akin to his.

A footballer getting a bit annoyed at drawing a game they should have won is not particularly noteworthy, no matter how much you want to imply he might leave at some point despite being contracted to the club until 2025.

Recommended reading of the day
David Squires does his thing.

Richard Jolly on the child that is Phil Foden.