Home Liverpool Are footballers ‘social pariahs’ or should we ‘salute’ them? 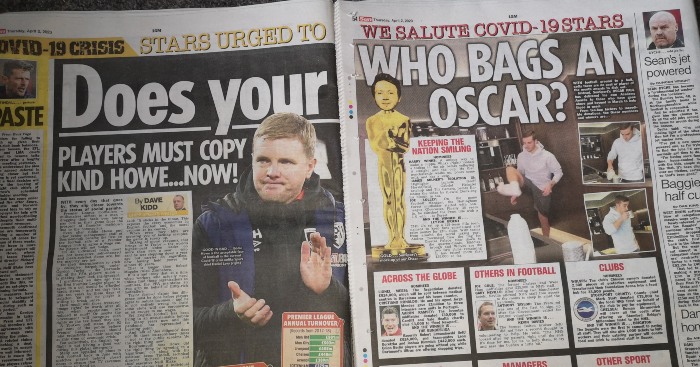 Pariah care-y
Massive mixed messages in The Sun, who dedicate their back page to Harry Redknapp’s ‘slamming’ of Tottenham and Daniel Levy while allowing Chief Sports Writer Dave Kidd to write a vitriolic column about Gordon Taylor, who is allowing footballers ‘to look ridiculously remote from the rest of society, which is quite some feat during a national lockdown’.

Kidd’s excellent column begins ‘WITH every day that goes by, they slip closer towards the status of social pariahs’.

So it’s odd that when we turn back two pages, we find The Sun ‘saluting Covid-19 stars’ as they give awards to ‘those who have gone above and beyond to help those in need’. Not by taking a wage cut, obviously, but by doing something equally wonderful like kicking a teabag into a cup.

‘Social pariahs’? Tell that to Oscar Paul, who gives Harry Winks an ‘Oscar’ (yes) for ‘keeping the nation smiling’. It’s true; we haven’t stopped grinning amid a global pandemic that is claiming thousands of lives since we saw the Tottenham midfielder volleying a teabag.

We all know the bar for footballers is pretty low, but giving James Milner an award for this…?

Had plenty of time to think about this… here’s my #isolationXI – let me know who would make your squad… #dadjokeseverywhere pic.twitter.com/zIQ3TedkrH

Social pariahs? They get a ‘salute’ for farting in the general direction of the NHS. Which is particularly pertinent when the front page of The Sun calls for a weekly ‘salute’ to the actual NHS. Shall we combine the two? Mediawatch will certainly be out on its doorstep on Thursday night with a round of applause for Joe Lolley and his exploits on Football Manager.

Exclusive shower
Over at the Daily Mirror, John Cross is claiming four exclusives as part of a double-page spread that features five of his bylines. He might well be the hardest-working man in football.

We won’t question his ‘exclusive’ tag on the claim that Premier League clubs will push to use five substitutes, even though we have just read the same story in The Sun. That’s easily done. And then there’s the claim that VAR ‘could be put on hold’. Well it certainly could.

But claiming an ‘exclusive’ that UEFA are ‘considering a mini four-team tournament’ to complete the Champions and Europa Leagues over two weeks since this in the Daily Telegraph? That’s a little bit of a stretch.

Howe many times?
Talking of ‘exclusives’, Mediawatch appreciates that Sami Mokbel might have been the first to break the news about Eddie Howe accepting a pay cut, but flagging it as such on the back page of the Daily Mail – when the club has confirmed and made a statement at 3pm the previous day – is a tad ridiculous.

Go Ed
It’s not quite as ridiculous though, as Chris Wheeler claiming a Daily Mail exclusive that ‘MANCHESTER UNITED are withstanding the fall-out from the coronavirus because of a massive £173million revenue from sponsorship deals’.

So that’s an April 2020 ‘exclusive’ on the Manchester United accounts published in September 2019.

It’s somehow comforting that in such times of crisis, the Manchester United PR machine has not been furloughed.

Sense of entitlement
It’s nice of Brian Reade – a man paid to give his opinion – to say in the Daily Mirror that Harry Kane, Karren Brady, Rio Ferdinand and Alan Shearer are ‘perfectly entitled’ to their opinion in a column headlined ‘No one knows how this season will play out…so let’s give navel-gazers Kane & Co the boot’. It doesn’t sound like they are entitled to an opinion.

Liverpudlian Reade basically wants partisan people to be denied a platform to say that they want to season to be declared null and void.

But what Mediawatch finds odd is the inclusion of Alan Shearer on this list as Reade writes:

‘Cynics are ­entitled to ask whether Kane would take a different view if he didn’t sit joint 11th in the Golden Boot table, eight goals behind Jamie Vardy.

‘Or if Spurs weren’t eighth in the ­Premier League, outsiders to qualify for next season’s Champions League, which they would be guaranteed to enter if the last eight months of football was ­expunged from the records.

‘To be fair, it’s only human to think that way.

‘Just as it is for a former Manchester United player such as Ferdinand to want the season voided to deny Liverpool closing the gap on their record 20 titles.

‘And for Brady and Shearer, who used their columns in The Sun, a paper Liverpool fans are at war with, to say scrap the season now.’

Is he suggesting that Shearer was pandering to his employers by saying that the season should be scrapped now?

Well, first let’s address the idea that Shearer said anything of the sort. And of course he bloody didn’t. His column in The Sun literally started with these words:

‘Not completing the season has to be the very last option on the table.

‘Every angle and scenario has to be looked at in order to reach a conclusion, even if that means a long delay before playing into next season.’

Which is just about the opposite of ‘scrap the season now’.

What he did say is that ‘if, and it is a huge if, the season cannot be completed then there is no way you can have a winner or loser’. Which is probably the opinion of around 95% of the population. It’s not controversial; it’s common sense.

And yet the absolutely non-partisan Liverpool-born, Mirror columnist wants The Sun columnist to be silenced.

Alisson’s starting to happen
We are not saying the subscription model is unsustainable in football journalism but The Athletic paid five journalists to contribute to a very, very long piece about Chelsea and their transfer revolution.

In the 41st paragraph of that piece, they wrote (one word each?) that a ‘notable miscalculation’ was Chelsea’s 2018 hesitation to buy Alisson, who then joined Liverpool instead.

On Thursday morning, that is the ‘most read’ story on the Mirror’s online football coverage under this headline:

The most ridiculous thing? They reported it extensively at the time – here, here and here.