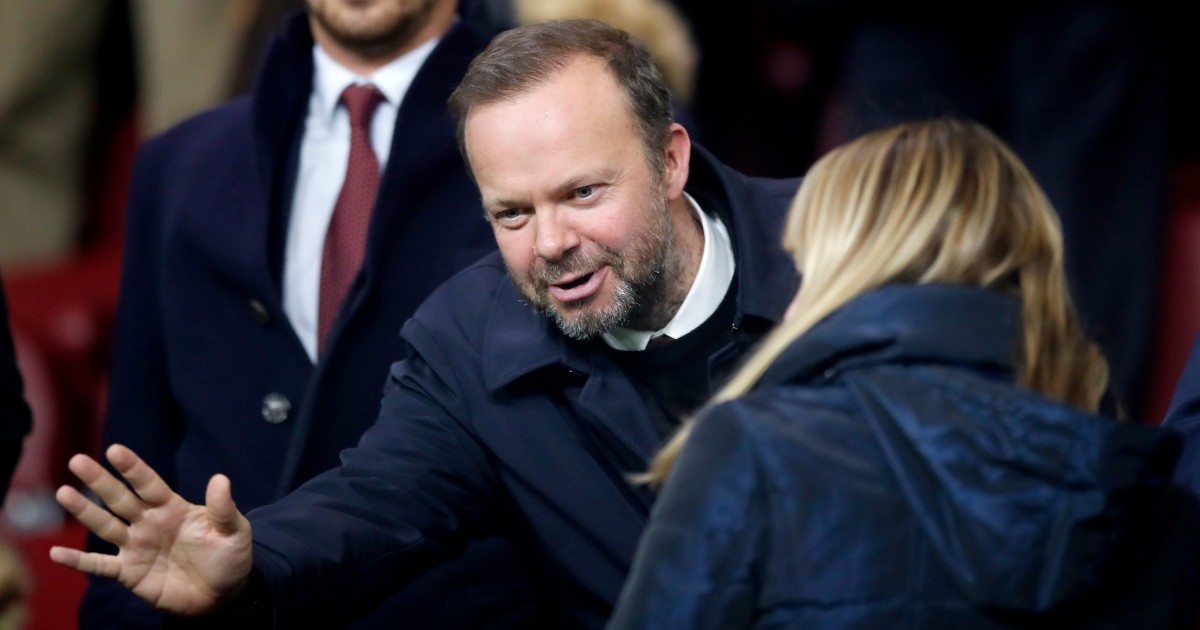 Ed Woodward did better than people think as Manchester United executive vice-chairman. He just needed Jurgen Klopp but it wasn’t meant to be.

On your Ed
Ed Woodward’s exit date from Manchester United has finally been confirmed and so it is time to run the rule over his hugely successful tenure as executive vice-chairman.

Neil Custis kicks us off in The Sun. This is his favourite subject.

‘THE easiest thing to do in assessing Ed Woodward’s time in charge of Manchester United is to blame him for everything.’

Agreed. Lovely stuff. That was easy. Oh, you’re not done.

‘After all, that is what Gary Neville does every time he picks up a microphone.’

Not really. In October 2020, Neville said that Woodward “has proven himself over a period of 10-15 years to be a highly competent individual running this club from a business perspective”. In that same interview, he added: “But why not put in place a football structure, an individual at the club who is the best in the world with sporting expertise to make sure Manchester United are ahead of the game? Ahead of the game with signing players, dealing with agents, these are really difficult things to do at all levels. It’s not easy to do these things, so I’m not sitting here saying it’s an easy job that he’s got – it’s not.”

In conclusion: he is an excellent businessman but out of his depth when it comes to the quite important footballing aspect of his highly-paid job. That seemed fair then and remains so now.

But Custis is not content with such nuance. Woodward is either a success or a failure. A hero or a villain. And in his eyes, it is always more of the former in both cases.

Woodward, according to Custis, ‘accepts mistakes were made’, such as the lack of proper support for David Moyes, the concession of ‘too much power’ to Louis van Gaal and the decision not to appoint Mauricio Pochettino at various junctures.

But ‘he does not regret appointing Jose Mourinho’ and things were ‘going in the right direction’ under Ole Gunnar Solskjaer until they were suddenly and mysteriously not. That bit is not particularly well explained. Probably nothing to do with Woodward, though.

‘The biggest piece of advice Woodward will give to his successor is to make sure they get that appointment right and have someone for the next five or six years.’

The man is a genius. It’s just a wonder as to why he never followed his own sage guidance.

Custis goes on to praise Woodward for ‘how he reversed the lack of investment in the squad’, which is one way of saying Manchester United have spent £1.072bn since he was appointed executive vice-chairman in 2013, all to win a League Cup, FA Cup and Europa League.

‘The debt from the Glazer takeover had to be serviced and there was no rich oligarch funding it all.’

The Glazer takeover that Woodward helped facilitate? That one?

‘So Woodward had to go out and get the money to ensure successive managers could enact their own plans.’

Or so that he could overrule said managers.

‘In the end the European Super League, with its elitist tone and no relegation or promotion, sat so badly with him that he could not back his bosses the Glazers in trying to see it through – so he quit.’

A reminder that Woodward was reported to have met with Boris Johnson ‘days before the launch of the ill-fated European Super League’, with a Premier League chief executive claiming “he was involved in it from day one”. It seems Woodward’s fingerprints were all over the plans that Custis continues to claim ‘sat so badly with him’.

Towards the end of this puff piece, the facade finally falls. Custis writes that Woodward is ‘a funny, engaging man, who loved talking about the game and wanted the best for United, yes, on the pitch’. It is a familiar line to read, particularly as Custis wrote in April that ‘Woodward is a funny, clever, engaging man – but also a fan of what was happening on the pitch’.

At this point you remember that Custis has already written this piece twice before – down to the anecdote about his wife no longer going to games and the blaming of media sceptic David Gill – in January 2020 and April 2021. It has taken him a week of 2022 to tick off his effort for the calendar year. Former Sun colleague and subsequent Woodward PR adviser Neil Ashton will be pleased.

Not a single person with Manchester United at heart will mourn Ed Woodward's departure from Old Trafford. He was a completely useless administrator who presided over decline and fall without an idea of how to counter it. He leaves the place in an utter shambles. Some legacy that.

Jur kidding
Custis also has one pertinent question in support of Woodward:

‘He looks at sliding doors moments when a different managerial appointment could have taken the Red Devils on a different path. But was Pep Guardiola not always bound for Manchester City and Jurgen Klopp for Liverpool?’

No. Both had lengthy sabbaticals from management during Woodward’s tenure. Indeed, Klopp was so not bound for Liverpool that Woodward flew to Germany to meet with the coach in 2014. As Raphael Honigstein later wrote in his 2017 Klopp biography Bring The Noise:

‘Woodward told Klopp that the Theatre of Dreams was “like an adult version of Disneyland”, a mythical place where, as the nickname suggested, the entertainment was world class and dreams came true. Klopp wasn’t entirely convinced by that sales pitch – he found it a bit ‘unsexy’, he told a friend – but he didn’t dismiss the proposition out of hand either.”

Martin Lipton of The Sun even reported in 2019 that Klopp had three meetings with Manchester United while still Borussia Dortmund manager. He presumably told them each time that was he bound for Liverpool.

Summer lovin’
‘As Woodward prepares to depart Old Trafford at the end of this month, he knows that he has failed to deliver. United, he firmly believes, are in a better place than the day Ferguson walked away in the early summer of 2013 and effectively took the majority of the club’s know-how with him’ – Ian Ladyman, Daily Mail.

January 2022: Manchester United are 11 points behind third place, and closer to Wolves in eighth than Champions League qualification.

Sol searching
‘The start under another German, Rangnick, has been slow. Monday’s defeat at home to Wolves was as bad as anything seen under Solskjaer, with the possible exception of the 5-0 home drubbing by Liverpool’ – Ian Ladyman, Daily Mail.

‘The possible exception‘?! Manchester United were awful against Wolves but losing 5-0 at home to Liverpool, being humbled 2-0 at Old Trafford by Manchester City a fortnight later and losing 4-1 to relegation-battling Watford was far, far worse. And that is before taking into account their Europa League final embarrassment, being beaten by an atrocious Sheffield United last January, getting hammered 6-1 by Jose Mourinho’s Tottenham and numerous other points that were much lower than a Wolves loss that was supposedly ‘as bad as anything seen under Solskjaer’.

Why just parrot this ‘three-point list’ without challenging it and pointing out that the last permanent manager of Woodward’s reign did not fit the very first criteria? Unless the Norwegian Tippeligaen and Lancashire Senior Cup is particularly cherished in the Old Trafford boardroom.

Hey, Arnold
‘Arnold’s first task will be to not make the same mistakes as Woodward’ – David McDonnell, Daily Mirror.

Good luck not appointing David Moyes as manager and giving him Marouane Fellaini as the only signing of his first transfer window, fella. It truly is the highest bar to clear

Klopp it
‘Woodward believes if City’s Pep Guardiola or Liverpool’s Jürgen Klopp had been hired they would have led United to a title’ – Jamie Jackson, The Guardian.

“A lot of the criticism is fair. But if he’d got a manager like Pep Guardiola or Jurgen Klopp then he wouldn’t have got much criticism at all because he could have left them to run the football side of things, United would have carried on winning, and then Woodward could have concentrated on things off the pitch, the business side” – Kaveh Solhekol, Sky Sports.

‘Some executives at Old Trafford feel they have been ‘unlucky’ to exist in the Premier League era of Guardiola and Klopp at City and Liverpool. Critics would say they simply should have hired a super coach of their own’ – Ian Ladyman, Daily Mail.

So to summarise, Woodward just needed to appoint Jurgen Klopp and everything would have been fine. But he was ‘always bound’ for Liverpool so ah balls.

Tickets, please
‘Arnold, who previously worked at PricewaterhouseCoopers and in the technology industry, is responsible along with Woodward for United’s admirable policy of not raising season ticket prices for a decade’ – Jamie Jackson, The Guardian.

‘When things don’t go well in football, someone has to get the blame and for the best part of a decade that man has been Woodward. He maybe doesn’t deserve every single piece of the criticism. For example, he has not raised season ticket prices once’ – Ian Ladyman, Daily Mail.

United front
And to finish, we head over to Sky Sports and Kaveh Solhekol:

“If you look at the record of United while Woodward was there, it’s not as bad as people think. Yes it’s bad compared to what happened under David Gill and Sir Alex Ferguson but they finished twice two times, they finished above Liverpool in three of the last six seasons, above Chelsea in four of the last six seasons. So we need some perspective.”

They did indeed finish twice two times – 19 and 12 points behind the champions respectively.

They did indeed finish above Liverpool in three of the last six seasons – but they have spent hundreds of millions to do so while watching the Reds win the Premier and Champions League in the meantime.

They did indeed finish above Chelsea in four of the last six seasons – but they have spent hundreds of millions to do so while watching the Blues win the Premier and Champions League in the meantime.

Woodward leaves Manchester United having hired and fired four different permanent managers, spending more than £1bn to win three trophies, never finishing within 11 points of the Premier League winners and not advancing beyond the quarter-finals of the Champions League.

Get some perspective, people.