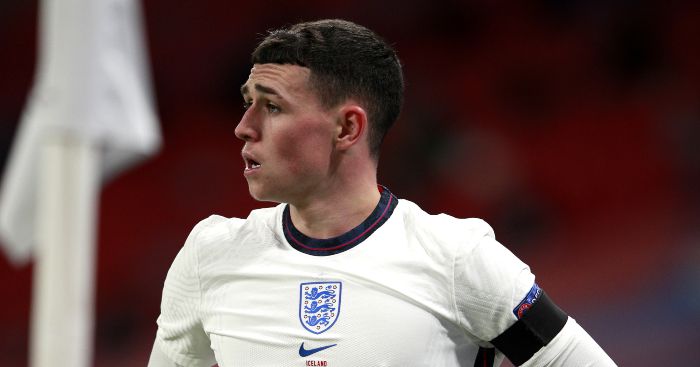 Phil Foden has taken up the Gazza mantle.

If The Sun were happy to preach earlier this week about the ‘new Gazza’ after a 2-0 England defeat, you can sure as hell bet they’ll do the same after a comfortable 4-0 home win. And make it about a completely different player.

Over to you, Charlie Wyett:

‘IN SPIRIT, it felt like Gazza was on the pitch at Wembley. But on this occasion, it was Phil Foden rather than Jack Grealish.’

Does it have to be either? Grealish has five England caps. Foden has three. Why is our only point of reference a player who retired as an international two years before the latter was born?

But it turns out that Wyett’s citations are all at least a few decades old. And mental.

‘Even at the back, although they were rarely challenged, Harry Maguire – who missed the trip to Iceland due to his arrest and subsequent court case in Greece – played like Franz Beckenbauer.’

Wyett goes much further on Foden and his ‘flashes of genius’. The 20-year-old apparently ‘continued his good form for Manchester City’ – which has amounted to two goals and one assist in nine Premier and Champions League games this season.

‘Guardiola claimed in 2019 that Foden was the most talented player he had ever seen and then promptly failed to select him regularly.’

Let’s not do this again. Foden has played 84 games for City under Guardiola. He turned 20 in May. That really is quite a lot of first-team opportunities with one of the best sides in the world, while in competition with some phenomenal teammates.

Guardiola has not ‘failed to select’ Foden whatsoever. He has managed his game time sensibly to prevent burnout.

‘But finally, we are seeing the type of player Foden has always threatened to be.’

Did we ‘finally’ see that with two goals in the final ten minutes at home to ten-men Iceland? Not in his 18 goals or 14 assists for a manager who has ‘failed to select him regularly’?

‘Gazza would have been proud.’

He ‘will surely be a central part of Southgate’s plans for the Euros next summer’, he adds.

It turns out that when Cross suggested Foden faced international ‘exile’ on September 8, he only meant for a month. As he said of the midfielder and Mason Greenwood:

King of the road

Mediawatch often enjoys trying to figure out which journalists had an idea of what they’d write before the game they were covering. Those who plough on regardless of what actually happens deserve all our respect.

We’ve all been there. This is perhaps our favourite example ever; Leicester lost that game 5-1.

Anyway, Dominic King offers a doozy of the genre in the Daily Mail. Here is his opening paragraph:

‘It was during a passage in the first half, when little flicks and feints had blue shirts twisting and turning, that you thought of someone absent.’

Most were probably thinking about how Foden, Grealish, Mason Mount and Bukayo Saka looked pretty damn good. Or where Raheem Sterling, Marcus Rashford and Jadon Sancho fit in. Or how Harry Beckenbauer was reinventing the sport.

But no, that ‘someone absent’ was James Maddison. He of a single England cap: 34 minutes as a substitute in a 7-0 win in November 2019.

‘Time and opportunities are running out,’ apparently. Think that ship might have sailed.

‘Another delightful story at Wembley was the fact that both Rice and Mason Mount scored. The pair are lifelong friends’ – Charlie Wyett, The Sun.

Does anyone know whether Declan Rice and Mason Mount are pals or not?

Football.London know. They are also aware that Rice has often been linked with a move to Chelsea to join Rice, with whom he has been friends since childhood.

Has he? Or has he done a post-match interview about how they worked well together for England at home to a pretty poor Iceland team that had a man sent off with more than half an hour to play?

Did Frank Lampard conduct the interview? He must have. Mount ‘told’ him and only him.

‘Had nothing to do with Iceland failing to lay a glove on England. Still gave home fans jitters with some risky passing’ – Tom Barclay, The Sun.

Two player rating evaluations written of Jordan Pickford and his ‘risky passing’ or ‘excellent’ distribution there.

Most pointless study of the day

‘Arsenal urged to sign Eriksen: ‘I don’t care about Spurs”

Not a bad headline in and of itself. But in combination with this tweet…

‘Campbell’ sticking it to Tottenham and telling Arsenal to sign one of their former players? Oh my.

Barney Ronay on Grealish, Foden and Saka (but not Maddison).

The Athletic on Venky’s and Blackburn.