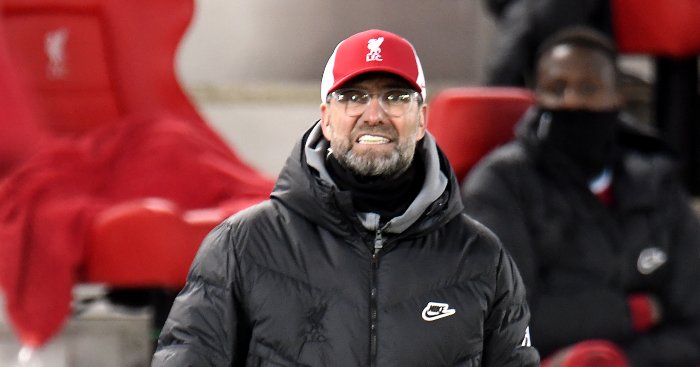 Liverpool are fourth, in the Champions League and FA Cup and six points off the top of the table. But this is a crisis and Jurgen Klopp’s mad

Gibber jabber
Jurgen Klopp described it as “nothing”.

Sean Dyche called it “just two managers fighting for their teams, wanting to win a game”.

But how does Charlie Wyett of The Sun refer to the tunnel incident between the pair at Anfield on Thursday evening, knowing full well no-one on Merseyside will actually read it?

Case for the defence
Wyett’s piece is otherwise largely fair enough, aside from a strange point about a backline that was only breached by an Ashley Barnes penalty.

‘It is not a surprise that they have struggled defensively due to the rotten luck they have suffered with injuries.’

But it might therefore be a surprise that they have simultaneously ‘struggled defensively’ while conceding only 13 goals – four penalties – in 21 games without Virgil van Dijk. Since Joe Gomez was sidelined they have conceded ten goals in 15 games, which is still pretty decent.

Not since the 7-2 loss to Aston Villa have Liverpool let in more than two goals in any match. Van Dijk and Gomez both started then. If anything they have improved defensively, albeit at great cost to their attack.

Blown off
But one question does remain: how blown is this Liverpool crisis?

‘It is not a full-blown crisis but there is now room for panic at Anfield’ – Wyett, The Sun

The answer: overblown, probably. They are six points behind the current leaders with half a season to play.

‘It is only a month since Liverpool beat Tottenham at Anfield and then put seven past Crystal Palace in London. Jurgen Klopp’s defending champions had not been at their best throughout the season but sat top of the Premier League.

What is this ’embarrassment’ of which you speak? They are fourth, still in the FA Cup and Champions League and, as you yourself suggest, the complexion of the table can transform in the space of a month.

Liverpool were bad against Burnley and have been as such for a couple of weeks. But the gap to first is six points and it feels like plenty of people need reminding of that.

Echo chamber
The word ‘crisis’ even appears twice on the typically positive Liverpool Echo website. The first is in a rundown of the national media’s reaction to the defeat (such a silly idea will never catch on); the second is for a full transcript of Jamie Carragher’s assessment of the game on Sky Sports.

In neither story is the word ‘crisis’ actually used at any point beyond the headline. Strange.

Crisis management
Hell, even very sensible man, James Pearce of The Athletic, is getting involved:

Jurgen Klopp is facing the first genuine crisis of his Liverpool reign. A look at how he handled the fallout from a demoralising night at Anfield. #LFC https://t.co/lPQyowsZqx

‘The first genuine crisis of his Liverpool reign’? It’s not even the first January crisis of his Liverpool reign. 2017 does feel like a lifetime ago but four draws, four defeats and a single win – an FA Cup third-round replay against League Two Plymouth – from nine games in that month alone represents a slightly lower point than being both in a Champions League place and in the Champions League knockouts.

Go fourth and prosper
The Daily Mirror‘s northern football correspondent sees no crisis just yet. But David Maddock does seem a little confused about the state of the current Premier League table.

‘They have not scored in four league games now – and they barely looked like ending that depressing run against Burnley.

‘That has seen them slip from leaders and Premier League favourites, to a side that are out of the Champions League places – and out of ideas.’

Does fourth not qualify now? Feels like more people should probably have been made aware.

Cutts deep
It has felt like a while since Daniel Cutts delivered a juicy exclusive for The Sun, but he brings that wait to a glorious end this Friday morning with praise for Darren Fletcher’s work at Manchester United.

The coach is credited for overseeing the ‘revival’ in Paul Pogba:

‘Since starting his new role, he has worked with Pogba and United’s other midfielders to push their game to the next level.’

‘And it is already reaping rewards, with Pog hitting the winners at Fulham and Burnley – and he also fluffed a late chance to snatch victory at rivals Liverpool on Sunday.’

Not sure what Darren Fletcher can really teach Paul Pogba about shooting from outside the area but still. Fair play.

‘Fletcher is helping the 27-year-old French World Cup winner improve the defensive side of his game.’

Glad to see his defensive coaching ‘reaping rewards’ in the form of winning goals. And is ‘Pog’ a more annoying tabloid nickname than ‘Roo’ or ‘Mou’?

That has to be the MailOnline.