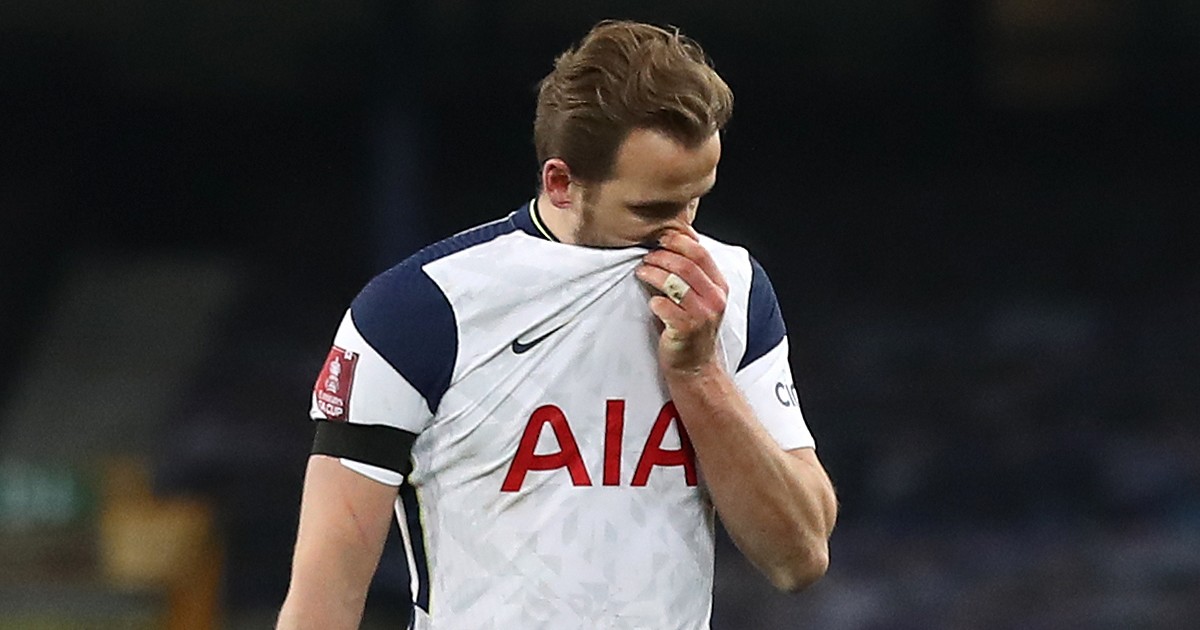 The Sun have used Harry Kane all summer but the second he is no longer of any benefit to them they dismantle the Spurs striker’s reputation.

How it started How it's going pic.twitter.com/P7qDbAPZyM

On July 23 it was Paul Jiggins who reported the ‘news Tottenham fans have been dreading’ as ‘their chairman’s acceptance of defeat in his battle to keep the England captain has realised their worst fears’.

That was when ‘Kane’s departure is now inevitable’.

Thirty-four days later, The Sun are kind enough to send Jiggins out to report on the news that Harry Kane ‘will NOT be leaving Spurs this summer after failing to engineer a move to the Etihad’.

Rise and fall
The exclusive claim of Tottenham offering Kane a £100,000-a-week pay rise and three-year contract extension after he spent the summer trying to stumble his way out of the club is fun, particularly for this line:

‘Spurs fear Kane could try to force through a switch in January or at the end of the season.’

On the basis of the last couple of months, Spurs have nothing to ‘fear’ in that regard whatsoever. Charlie Kane must have Daniel Levy quaking in his boots after this summer.

‘But club chiefs know even that may not prevent him from leaving in his quest for honours.’

If this transfer window has taught us anything it is the opposite: that absolutely will ‘prevent him from leaving in his quest for honours’ for as long as Tottenham decide not to sell a player on a long-term contract at a discount price to a direct rival. Let’s stop pretending Kane holds any cards here, never mind all of them.

Transferring blame
The Jiggins entertainment continues within the newspaper:

‘Harry Kane’s decision to stay at Spurs is the biggest U-turn the club has seen since Joe Lewis on his superyacht in the Bahamas.’

Ha ha. Good one. Cracking line – and Mediawatch does not mean the Joe Lewis bit but the claim that this was in any way ‘Harry Kane’s decision to stay at Spurs’. It was definitely his call not to join the many hundreds of clubs willing to meet his transfer valuation.

‘What is certain is his megabucks switch to City now appears dead in the water. At least for this transfer window.’

And that after being ‘inevitable’ little over a month ago. Life comes at you fast.

‘The only reasons Kane will still be at Tottenham come September 1 is because Daniel Levy would not sell him for less than £160million and City were not willing to pay that for him.

‘Had either or both been different, Kane would have been off up the M6 like a shot.’

Yep. That is how it works. That is a transfer negotiation involving three separate parties. If only you had grasped that back in July and tempered the confidence a little.

Harry blame
The most stunning aspect of this whole thing is just how quickly Jiggins turns on Kane despite The Sun using him to boost their newspaper sales for the last few months.

‘It is safe to say this embarrassing climbdown was not part of his exit strategy.’

And Mediawatch is still waiting for your embarrassing climbdown from that front page. And the last month or so in general.

‘Kane may be ruthless in front of goal but neither he nor his brother and agent, Charlie, were ever going to be shrewd enough to take on Levy and win.’

You could have told us that they weren’t ‘ever going to be shrewd enough’ when you said ‘Kane’s departure is now inevitable’.

‘The halo of English football’s golden boy has slipped during this saga. The Three Lions’ talismanic skipper and ambassador of the modern era has sadly revealed himself as greedy and as cynical as some of his predecessors.’

Oh my. The Sun have played with their new toy all summer and are done with him even before the window is out (all while pretending they didn’t play the biggest part of anyone in this sorry saga). You hate to see it.

‘It has been a blooming PR disaster which has left an indelible stain on the frontman’s previously unblotted copybook.’

Whose boot will you implore the public to kiss before a match now?

‘You can point the finger at Kane for the way he has handled this situation.’

And there it is. The second that Kane and his brother are no longer of any use to The Sun, they cast him aside, chastise him and start ignoring Charlie’s frantic WhatsApp messages. His ‘halo’ has ‘slipped’, he is ‘greedy’ and ‘cynical’, it has been a ‘PR disaster’ and Kane is solely to blame.

If you jump into bed with the nation’s best-selling newspaper, don’t expect to climb out the other side with your reputation intact when it no longer suits them to fetishise you in search of that big move.

Poised and ready
‘ENGLAND skipper Harry Kane is poised for a £160million move after Spurs chairman Daniel Levy agreed to let him join an English rival. The Euros hero, 27, is set to join Man City on a record £400,000 a week’ – Clemmie Moodie, The Sun, July 23.

‘City made no secret of their wish to land Kane and were convinced he wanted to come. But there was no way they were going to pay £150million for him’ – Paul Jiggins, The Sun, August 26.

The first story was slapped proudly on the front page. That detail in the second is weirdly buried within the newspaper. Must have been a simple mistake.

This really hasn’t aged well at all, has it?

Predictive text
‘In the end, the £160million price tag for England captain Harry Kane proved too much – even for the champions – just as their manager had predicted’ – Martin Blackburn, The Sun.

But not Martin Blackburn himself, who said Kane was ‘poised for a British record £160million move if Spurs chairman Daniel Levy rubber stamps the deal’.

On the same page
‘Harry Kane pledged his future to Tottenham yesterday – 24 hours after Manchester City ended their interest in the striker’ – Darren Lewis, Daily Mirror.

‘Manchester City were insisting on Tuesday night their focus was still on signing Harry Kane from Tottenham. By lunchtime the following day, the rug was pulled under City’ – David McDonnell, Daily Mirror.

Law and order
There is only one place to end this madness: with a hot take on Twitter.

No winners in the Kane saga for me. Tottenham have a depreciating asset who everyone knows would rather be elsewhere, City still don't have a striker and Kane didn't get what he wanted.

Poor Tottenham, having to keep ‘a depreciating asset’ that the Premier League champions wanted and who recorded the third-best goalscoring campaign of his career last season. That Daniel Levy is a big old loser.