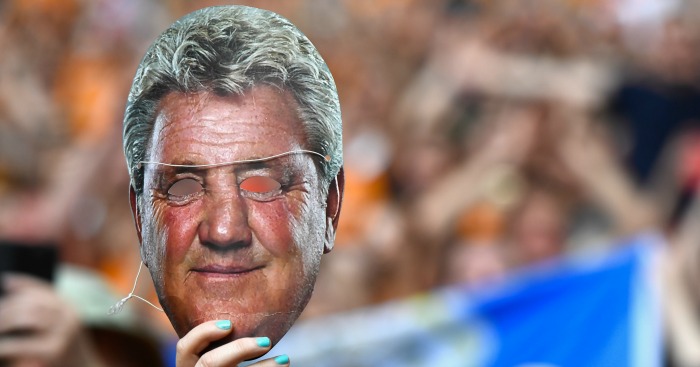 When all this was trees…
Where to start with Martin Samuel’s interview with Steve Bruce in the Daily Mail? We certainly won’t be starting with shock and awe at this marvellous scooop, considering the way in which Samuel has been unashamedly punting Bruce for the England job. Steve, will you talk to this bloke who has been voluntarily running your campaign? Oh go on then…

Let’s start with this from Bruce:

“If our players start to see coaching as a dead end, where is the next Ferguson, the next Clough or Shankly? It’s sad. How will players see a pathway, how are they going to see a future if even the England job goes abroad?

“No-one with anything about them is going to view it as a career. At club level, sure, it’s great box office – Jurgen Klopp, Jose Mourinho, Pep Guardiola – but if those jobs are unavailable, and then even our own FA are not interested, where is the encouragement?”

First of all, it looks very much like the England job will go to Sam Allardyce, who is English. So why the hell are two ageing men meeting to get angry about English managers not getting opportunities? Should Allardyce be appointed, he will be an Englishman replacing another Englishman. HOW F***ING DARE THEY?

Secondly, of the 92 Premier League and Football League clubs, 70 are managed by British or Irish managers. That’s quite a lot. We suspect it’s enough for ambitious players to see a pathway.

Thirdly, Manchester United and Liverpool have both appointed British managers in very, very recent times; those jobs are available. Just not to Steve Bruce.

Did somebody hit the straw man alert button again? But more importantly, we would like to know just how many Italian and German jobs Steve Bruce – or Allardyce, or Alan Pardew – have applied for in total? How many CVs have they written in Italian or German? Mediawatch will eat its own hat, scarf and gloves if recent Serie A and Bundesliga vacancies have prompted a barrage of applications from elite English managers.

“We’ve got to get that English spirit back. It’s what we’re about, what we’re famous for.”

Is it? And when were we famous for that? In Bruce’s playing hey-day between 1992 and 1996 when England failed to qualify for a World Cup? Were we English enough in those days? Jesus, perhaps we were too English? Is that even possible?

“All we want to see is an England team playing with the energy we see in the Premier League every Saturday afternoon. Hunger, aggression – and without fear.

“We go to tournaments now and we’re wrapped up in fear. I see the players arrive, tracksuits, washbags, headphones, in their own world.”

Oh and England are sh*t because they have tracksuits. Never mind that tabloid darlings Wales had tracksuits and washbags and headphones too. At least we now know what Bruce would bring to the England manager’s job: Suits, no shampoo and no music. That’ll bring back that English spirit.

“Call me old fashioned, but we’re now holding umbrellas up as our players get off a plane. Do they need that? It’s a few spots of rain. OK, they might get wet. Well, let them get wet. That’s what happens when it rains. We’ve got to find our humility again because, frankly – we ain’t that great. We haven’t got anywhere near winning, yet we’ve got very good players. So something is missing.”

So we have to simultaneously get back our humility but also the English spirit that makes us better than everybody else? Why the hell haven’t the FA been talking to Bruce this week? He is truly an oracle.

‘Bruce was captain of one of the greatest teams of the modern era: Sir Alex Ferguson’s first Manchester United title winners. If the national team could bottle some of what they had, it wouldn’t be a bad thing, surely?’

It’s easy to argue with that notion of a successful Manchester United captain being the perfect choice to manage England with just two words – ‘Bryan’ and ‘Robson’ – but allow us to quote Steve Bruce himself, from further down Samuel’s piece…

“When you give your first team talk, or tell a player he’s dropped that first time, or go in front of them all and explain what your team is going to be about, they don’t care whether you played for Manchester United.”

Thanks Steve. We couldn’t have put it better ourselves.

‘Unlike Ferguson, however, the problem for Bruce, for all British managers, is that it is so hard to quantify their achievements.

‘How to evaluate turning Hull from a mid-table Championship team, at best, into one that has reached the Premier League and the FA Cup final, in terms of its suitability for coaching England at a World Cup.’

It’s only difficult to quantify the achievements of British managers if they don’t actually win anything, Martin. But we would make a pretty good fist of quantifying the achievements of, say, David Moyes at Manchester United, Tim Sherwood at Aston Villa or Steve McClaren at Newcastle; it wouldn’t take long.

Also, Bruce did not ‘turn Hull from a mid-table Championship team, at best, into one that has reached the Premier League and the FA Cup final’; he took Hull back to the Premier League after a massive absence of three seasons, spent over £65m on new players, got relegated and then needed the play-offs to secure promotion again despite being top of the table at the end of February. Bruce has done a decent job at Hull – there, we have quantified it –  but he has not done a job that screams ‘make me England manager’, especially when Samuel is doing that job for him already.

‘Then there are the consequences of failure. Getting Karlsruher relegated to Germany’s third tier proved no obstacle for Joachim Low, yet taking Hull down – despite them bouncing straight back – would be seen as a mark against Bruce.’

Except it really did prove a massive obstacle to Loew because he was forced to find work first in Turkey and then in Austria, where he managed Tirol Innsbruck to a league title and then led Austria Wien to first place in the Austrian Bundesliga before leaving the club. Oh and he spent two years as Jurgen Klinsmann’s assistant with Germany before taking the actual manager’s job.

Had Bruce followed either of his relegations from the Premier League with a title in another country then we could talk about comparisons between him and Loew. But obviously that’s not possible because all those Italian and German applications were thrown in the bin by patriotic Serie A and Bundesliga clubs.

We will leave the final word to Martin Samuel, but only because we have been rendered speechless…

‘So what is the real impossible job? England manager or English manager? A figure in Hull City training kit comes hobbling past us. He’s done something to his knee. Doesn’t know what yet, but it’s killing him.

‘Bruce watches him disappear down a corridor with a resigned look. ‘That’s handy,’ he says. ‘He’s our fitness coach.”

Just reading Big Sam's book. It's good but I'm pretty sure this is not a saying. @F365 pic.twitter.com/z3o2gbCroP

Inside outside
The Daily Mirror’s Chief Sports Writer Dave Kidd is not a fan of Football365; we know this because we are blocked from viewing his Twitter account.

Thankfully, though, we are not blocked from viewing the back page of the Daily Mirror, which hosts his ‘EXCLUSIVE’ story that ‘SAM ALLARDYCE is increasingly likely to be offered the England manager’s job’. He has gleaned this inside information from ‘FA insiders’.

It’s a shame then that those ‘FA insiders’ never thought to tell Kidd that Allardyce was actually interviewed at the home of FA vice-chairman David Gill on Tuesday; they saved that information for the Daily Mail.

Wayne Rooney: An anecdote
Mediawatch can only speak for itself, but if we ever need an expert opinion on Wayne Rooney’s role for England, we always look towards Steve McClaren, the only England manager who has failed to take England to a major tournament in the last 20 years.

Here he is on Sky Sports:

In case you dropped off before the end, you will be fascinated to read this anecdote from the man himself:

“I remember in one dressing-room at half-time…before the game…I just looked at him and he took leadership, and he kind of said “just give me the ball all the time”. He had that where he demonstrated…it wasn’t vocal…it was demonstrated by what he did with the ball.”

Sizzling rivalry
‘THIERRY HENRY will join one of Arsenal’s rivals after being shown the door by Arsene Wenger,’ says the back page of The Sun.

‘The Gunners legend is being chased by West Ham and Watford…’

Tactics with Custis
The Sun should make this a regular thing. Struggling to understand Pep Guardiola’s tactics? Read this:

‘The basic principles behind the Spaniard’s sides are not based on possession and passing. They are far more basic than any intricacies drilled on the training ground.’

Obviously, Aaron Ramsey is the very first person to dye their hair blonde.

And obviously, this is not just a way to get ‘Paul Pogba’ and ‘Arsenal’ in the same URL.

Thanks to today’s spotters Jay Quinn and Owen Amos. If you see anything that belongs on this page, mail us at theeditor@football365.com, putting ‘Mediawatch’ in the subject field.