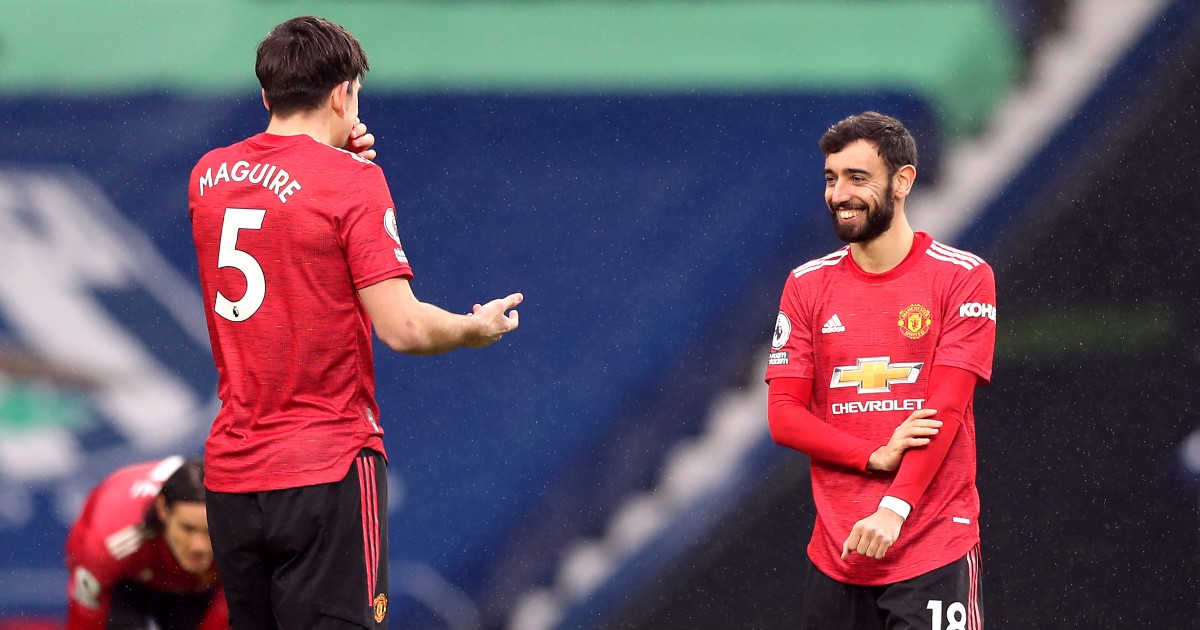 The Sun are daring to publish exclusives about Harry Kane’s Spurs future, while Bruno Fernandes has compounded the plight of Harry Maguire.

Should I stay or should I stay now?
It is 210 days and counting since Daniel Levy ‘caved’ and ‘agreed’ to sell Tottenham striker Harry Kane, who was ‘poised for a £160million move’ to Manchester City on wages of £400,000 a week.

‘Thrilled Harry told of his joy at his pending £160million Man City move while best man at his brother’s wedding,’ wrote Clemmie Moodie in a front-page exclusive for The Sun, which also included the following line:

‘It will be a four or five-year deal – that is still to be finalised.’

So forgive Mediawatch for looking upon any subsequent Sun exclusive on Kane’s future with suspicion and scepticism. Like when Paul Jiggins tells us on Friday morning that the forward ‘wants assurances Antonio Conte will be backed in the transfer market before committing his future to Tottenham’.

He continues: ‘The England skipper, 28, will decide at the end of this season whether to stay after trying to leave last summer in pursuit of trophies.’

Nope. We’ve been through this. Tottenham will decide at the end of this season whether he stays. Kane has more than two years left on his contract. He can ‘try to leave’ all he wants but last summer proved how inconsequential that ultimately is.

‘If Kane believes the club are not prepared to back their boss, the frontman is likely to once again try to engineer a move away.’

And Daniel Levy is likely to once again do what he wants. But if Kane stays, will Jiggins hang the ‘greedy’ striker out to dry this time?

How the inevitables have turned
‘Their chairman’s acceptance of defeat in his battle to keep the England captain has realised their worst fears – and shown how far the North London club has fallen in the last couple of years. Kane’s departure is now inevitable…’ – Paul Jiggins, The Sun, July 23.

‘But the summer move did not happen when Levy refused to accept less than £160million for his star man – who is under contract until 2024’ – Paul Jiggins, The Sun, February 18.

Don’t worry, be happy now
How convenient that The Sun have landed on this latest exclusive just a day before Tottenham travel to Manchester City. Martin Blackburn maximises the opportunity in a two-page spread on Kane’s ”what if?’ moment’.

‘If Kane, 28, got his way last summer, he would have been that missing piece…’

A Manchester City side with a nine-point lead atop the Premier League and a 5-0 advantage in their Champions League last-16 tie, having scored 98 goals all season, really are struggling without ‘that missing piece’.

‘So Kane will be worrying that Guardiola’s men have moved on and evolved over the last six months – and that the ship which adorns the club’s badge may have sailed for him.’

It doesn’t seem likely that possibly the best club in the world right now will pay over the odds for a 29-year-old with fewer league goals this season than Che Adams, Jorginho and James Maddison, no. Not when Erling Haaland will be available for half the price.

But writing that Kane ‘will be worrying’ that Manchester City ‘have moved on’ and that ‘ship…may have sailed’ is weird in the context of the same newspaper publishing a back-page exclusive stating he is ‘happier’ at Tottenham and ‘more open to the prospect of staying’.

Great Dane
‘But whatever Rodgers said to his players during their half-time cuppa did the trick as Randers – the team just up the road from Legoland – were reduced to rubble’ – Graeme Bryce, The Sun.

More than 81 miles is not ‘just up the road’. Unless you think London is a short trip from Portsmouth.

I’ve seen a lot of reports about this club that aren’t true and this is another. Not going to start posting about everything that is written but I needed to make this one clear. We’re united and focused on Sunday. Enjoy your day everyone 💪🏻 @ManUtd https://t.co/YxLhQn8pqf

…but even he will admit that The Sun‘s Ken Lawrence has him bang to rights on one thing: Steve Bruce was better at attacking corners.

It is a particularly weird thing to hold against Maguire in his worst Manchester United season to date: a lack of goals from set-pieces. But here we are, being told that Bruce was ‘a renowned danger in the opposition penalty area’ and ‘an expert penalty taker’.

Lawrence painstakingly details his goalscoring prowess before asking to ‘compare his record to the current central defenders at the club’.

It turns out that Maguire, Victor Lindelof and Eric Bailly aren’t as good as Bruce because… they don’t score as many goals. Who knew?

We don’t talk about Bruno
The bad news does not stop there for the Manchester United captain. The top story on the Daily Mirror website is not David McDonnell’s back-page newspaper exclusive about the ‘power struggle’ between Maguire and Cristiano Ronaldo at Old Trafford. Instead, it’s this doozy:

Good lord. What an almighty mess. And now Bruno Fernandes is PICKING SIDES.

‘Bruno Fernandes’ latest Instagram remarks have done little to stop talk of dressing room rifts at Manchester United,’ the first paragraph reads. And at this point Mediawatch cannot wait any longer. We simply have to see this post in all its ‘pointed’ glory.

‘The snap along with that message, further hints at the escalating turmoil within the dressing room…’

Or it shows three colleagues enjoying themselves at work. Unless we really are suggesting that Fernandes orchestrated this photo so he could make clear where his allegiance lies in this WAR between Maguire and Ronaldo?

‘Indeed, coming just hours after the news of the growing tension, Fernandes’ upload could be interpreted as a subtle shot at Maguire.’

It could also be interpreted as Fernandes taking the p*ss in a subtle shot at David McDonnell. See, anyone can make stuff up.

The headline to that piece is absolutely revelatory, by the way:

What vision. Why can’t Manchester United see it’s as easy as appointing ‘their own Klopp’?