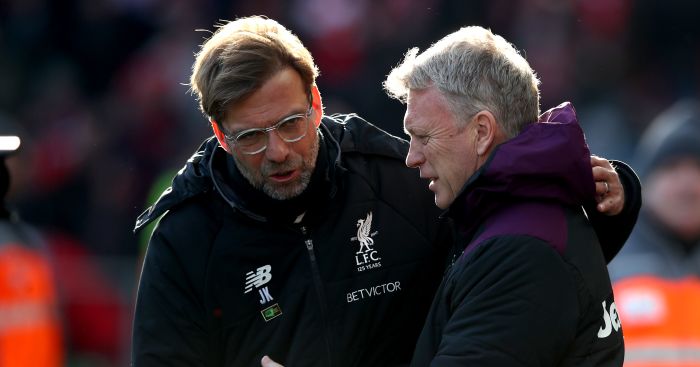 Feel the Moyes
David Moyes was on talkSPORT on Tuesday. He was quite entertaining and insightful. He discussed a number of topics, ranging from Harry Maguire and his “big arse” to Paul Pogba, and to joining up with David Beckham at Inter Miami.

He also said the following:

“I was trying to think the other day if you could make a Premier League team up from all the teams that could topple Man City to win the league, and I think it would be very tough.

“Even if you had a team that included all the top players in it.”

You “think it would be very tough” to think of a team that could beat City to the title? Liverpool literally finished a point behind them last season: just choose them, perhaps change a couple of players and cross your bloody fingers, Dave.

Daylight! I need daylight!
Martin Samuel does not like VAR. In particular, he really dislikes VAR’s impact on the offside laws.

‘Football has never worked to a millimetre precision on offside before,’ he writes in the Daily Mail. ‘It has worked on look and, more importantly, feel. What feels right, what feels just — and this super accuracy does not.’

Actually, fair enough, because there is something contrary to the game’s spirit about getting out a protractor and compass, then ruling a player to be offside by a couple of millimetres.

‘VAR was meant to correct clear and obvious errors and in the case of offside, fans believed this meant instances of plain infringement, with daylight between attacker and last defender somehow missed by the linesman.’

But hold on, that’s not true at all. This is more like it.

First of all, this daylight thing – absolute balls – read Adam Hurrey’s article in The Telegraph for a fine dismantling of that argument.

Secondly, it was made very, very clear by the Premier League (and PGMOL) that offside was not going to be a ‘clear and obvious’ issue and at no time during the Stockley Park briefings, which Samuel would certainly have been invited to, was the message relayed that it would be anything other than a factual decision.

As for the supporters, surely enough examples of VAR’s use now exist for them to have known what this would look like? See Ellen White’s non-goal against America in the Women’s World Cup, or Sergio Aguero being ruled offside in that Champions League quarter-final against Tottenham. There are vagaries to this – clearly – but offside isn’t one of them.

‘Yet clear and obvious does not actually apply to offside because, as referees are explaining, it is unconditional. So players are now being given offside who were previously classed as level. And level was a myth. There is no such thing as level if we slow the action frame by frame because one player will always have a part of his body fractionally ahead of the opponent. Yet level was an important part of our reasoning around football.’

A great get!
Incidentally, Samuel’s interview with Newcastle owner Mike Ashley really hasn’t aged well. You remember the one: when Ashley was allowed to write what amounted to his own, unchallenged press-release, which industry bigwigs described as a ‘great get’ and Newcastle United supporters – quite rightly – got very upset about.

Anyway, The Athletic announced this morning that Rafael Benitez is going to be writing a column for them this season and, in the first installment, Benitez takes aim at Lee Charnley’s accusation that he left the club (and moved to China) ‘for the money’.

We recommend reading the entire article, but this is probably the most malignant paragraph:

‘After that meeting, I knew they would not come back with a serious offer and, when it arrived, 19 days later, it was for the same salary as three years earlier and with less control over signings. Charnley’s comments in the programme about having a deal agreed for Joelinton in February explains a lot that I couldn’t understand at that time.’

This is why people got upset. This is why Craig Hope’s sneering at the ‘Jeremy Paxmans’ was so misplaced. Benitez is a highly political manager who exerts more control over the media than most realise, but Ashley was allowed to gloss over a really important period in the club’s modern history without so much as a hint of a journalistic challenge. Benitez’s version of events shouldn’t be taken as fact, but then that’s entire the point – the media’s role in this was to do what the public couldn’t, and hold people to account.

Actually – yes – if the average Newcastle supporter had been put in front of Ashley, they might very well have done a better Paxman impression.

The Marc of the man
‘OLE GUNNAR SOLSKJAER has handed Manchester United striker Marcus Rashford a 20-goal target this season,’ reads the first paragraph to a Daniel Cutts exclusive in The Sun.

That will be a regular central striker being expected by his manager to score 20 goals for a team with Champions League aspirations. Why have the damn presses not already been stopped?

The weird thing about the claim is that the quotes that are included from a mysterious ‘Old Trafford source’ make no mention of such a target. Probably because Ole Gunnar Solskjaer doesn’t feel it necessary to tell Rashford he expects this arbitrary thing of him.

“Ole sat down with Marcus last week. It was all very positive,” we are told.

“It was for about half an hour for a chat about some of the things he wants to see more from him.

“Ole will be helping him more with his movement inside the penalty area and to play a little closer to goal.

“He has been too reliant on the ball over the top but will now expect more slide passing down the side of the two centre halves.”

Just wait until he sees Sunday’s game back. There’s probably a fair reason that “he has been too reliant on the ball over the top”.

Collywobble
Stan Collymore begins his column in The Mirror by stressing the need for context when assessing Chelsea’s performance at Old Trafford. So far, so reasonable.

‘It’s all well and good saying, “We want to play, we want to be open, keep the ball, be brave, be this and that”.

‘Don’t get me wrong, we want teams to take risks and be positive because football is part of the entertainment industry after all.

‘But football law dictates you must, must, must take care of business in your own half if you want to finish in a good position in the league and Chelsea didn’t do that for the entirety of the game on Sunday.’

Stan, we’ll have to stop you there: Chelsea were the better team until Kurt Zouma gave away that penalty. They were following ‘football law’.

‘For the first 20 minutes, they were very good, they popped the ball around beautifully, they looked as though they were playing with confidence.

‘But when United took the lead, they lost confidence.

‘And it doesn’t matter whether you’re a promoted team or a young team that has been put together at an established Premier League club, you have to protect youngsters’ confidence by being pragmatic because they will have never been in this position before.’

Collymore isn’t alone with this strange attempt to pin the defeat on inexperience. Yes, Frank Lampard started Tammy Abraham and Mason Mount, but neither were in any way responsible for what happened at Old Trafford. And hasn’t this been exaggerated a touch? Chelsea’s back six (Kepa, Azpilicueta, Zouma, Christensen, Emerson, Kovacic, Jorginho) was full of international, European and Premier League experience and the defensive lapses were really attributable to mistakes from players who really should know better.

This imagined naivety is nothing of the sort. Mount was actually one of Lampard’s best players on the day, one of the few who didn’t freeze, and while Abraham has had better games, he still came closer to scoring than any other Chelsea player.

Sometimes it isn’t about philosophy or some weighty ideological failing. Sometimes it’s just about dropping Zouma and waiting for Antonio Rudiger and N’Golo Kante to recover from injury. That might help.

The balls? The numbers on the balls? It’s all just a load of old balls, isn’t it?

‘Ian Wright has claimed that Paulo Dybala forced Man Utd to pull out of a transfer for him on purpose.’

It would be weird if he forced them to do it by accident, no?

Anyway, Daily Mirror, what is this big ‘revelation’ from Ian Wright as to ‘how Paulo Dybala forced Man Utd to pull out of transfer’?