Home Mediawatch Mediawatch: How ‘bantz’ might win Spurs the title… 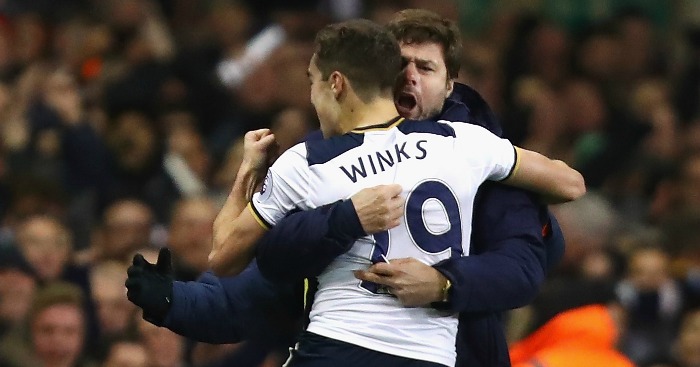 Insight of the day
Ray Wilkins on Sky Sports News HQ: “The Champions League without Manchester United is like China without rice.”

Which must make Sky Sports incredibly relieved that they have rights to football in China (with rice) but not the Champions League (without Manchester United).

Mediawatch rewind
As RB Leipzig rise to the top of the Bundesliga following a 3-2 win over Bayer Leverkusen, Mediawatch feels compelled to re-visit this from John Hartson on Oliver Burke:

“He’s gone over to Germany and I can’t understand that, to be honest with you. I think that stinks of agents more than anything else. How much German football do we all see? We see highlights of Bayern Munich and Borussia Dortmund, and that’s about it.

“The Premier League is the place to be. I thought that was the next step for him. He’s gone to Leipzig, but what about a Burnley or a Sunderland or a West Brom?

“It’s only my opinion, but I think he is good enough for the Premier League.”

How Burke must wish he was spending his Monday night playing in West Brom v Burnley instead of celebrating being top of a tinpot European league.

If only he’d believed he was good enough for the Premier League.

If my auntie…
Mediawatch simply cannot get enough of these quotes from Phil Jones:

“It is crazy. If we had won today, then we would have been three points behind Arsenal. Arsenal have had a world-class season and we are supposed to have had an average season. That is just the way the Premier League works.”

Where to start? With the wonderful ‘if we had won today’, making us wonder just where Swansea might be if they had won a bit more often? With the entirely ‘crazy’ suggestion that anybody at all has said that Arsenal have had a ‘world-class season’, or indeed that anybody at all would ever say that any team’s season was ‘world-class’? Or with the ‘supposed’? It’s not a matter of perception, Phil; you are average. You have claimed average results from average performances. That’s one of the reasons why you didn’t win against Arsenal and aren’t just three points behind Arsenal.

This is not ‘the way the Premier League works’; this is the way that football works. We know it’s been a while, fella…

The Kane Gang (Part the first)
Neil Ashton in The Sun, Exclusive, November 14: ‘HARRY KANE and Spurs have agreed to put all talks over a new contract on hold. The England striker’s future is increasingly uncertain as the two parties are at loggerheads.

‘The England striker’s future is increasingly uncertain as the two parties are at loggerheads. Tottenham are refusing to offer a deal in line with Kane’s England strike partners or even make him one of the highest earners at White Hart Lane.’

Harry Kane himself, November 19: “We are in talks and I’m sure we will get something sorted. I’m not panicking and I’m not demanding anything as I’ve read in the paper. We’re having a conversation and I have no doubts that we will get it sorted. As I say, I want to be here for a long time and I am sure I will be.”

Andy Dillon in The Sun, November 21: ‘HARRY KANE has pleaded with Spurs to nail his long-term future to the club by giving him a pay rise.’

Oddly, Dillon seems to have entirely missed the quotes where Kane said he was not a) panicking or b) demanding anything. Or indeed the quote where he said that the newspapers had got it wrong. Instead, he has heard the most level-headed, even-handed ‘plea’ in the history of football. We can’t think why.

The Kane Gang (Part the second)
John Cross in the Daily Mirror, Exclusive, November 19: ‘Manchester United have been alerted by Harry Kane’s contract stand-off at Tottenham. The Premier League giants are watching developments closely as they are looking for a new big-name striker at Old Trafford.

‘Kane, 23, and Tottenham have agreed to postpone contract talks until the end of the season after initial talks showed they are a long way apart. Tottenham chairman Daniel Levy is growing increasingly frustrated by the Kane camp as talks have hit a brick wall with the England striker wanting in excess of £100,000-a-week.’

Harry Kane himself, November 19: “We are in talks and I’m sure we will get something sorted. I’m not panicking and I’m not demanding anything as I’ve read in the paper. We’re having a conversation and I have no doubts that we will get it sorted. As I say, I want to be here for a long time and I am sure I will be.”

Darren Lewis in The Daily Mirror, November 21: ‘Harry Kane has urged Tottenham to sort out his contract.’

Oddly, Lewis seems to have entirely missed the quotes where Kane said he was not a) panicking or b) demanding anything. Or indeed the quote where he said that the newspapers had got it wrong. Instead, he has heard the most level-headed, even-handed ‘urging’ in the history of football. We can’t think why.

Least surprising fact of this or any other day
Harry Winks’ nickname is – and we know this thanks to The Sun – ‘Winksy’.

Why Tottenham might win the title…
Tottenham fans who read The Sun will be very happy that West Ham fan Andew Dillon was the man tasked with analysing ‘five key areas of Spurs’ campaign under the spotlight to see whether they can make a genuine title challenge this season’.

After addressing MENTAL TOUGHNESS (they have it), Dillon arrives at SUBSTITUTES (they have them, despite STRENGTH IN DEPTH being potentially their ‘weakness’) and then MANAGER.

Does he praise Mauricio Pochettino for being adept at changing formations and tactics (sometimes mid-game), for bringing through young players or for restoring the confidence of near-champions who must have been shattered last season? Does he f***.

‘POCHETTINO makes jokes in English. It may sound trivial but it underlines the fact Tottenham’s Argentine chief has cracked our lingo to the extent he can come out with one-liners. In an era when “bantz” is so prominent, understanding fully how to communicate to a team with a spine of English players and good English speakers can make a huge difference.’

Yes. That’s right. Tottenham might win the title because their manager does bantz. Which makes you wonder a) what went wrong last year and b) what’s going awry with the four native English speakers currently occupying four of the bottom five slots. Not enough comedy t*ts?

Crooks picks both Anichebe and Defoe in his Team of the Week (it takes a brave man to do that in an imaginary team) and then writes: ‘It was a profitable decision by David Moyes to employ Victor Anichebe in a more advanced role as the game went on. Yet I cannot see Sunderland escaping the dogfight at the bottom of the table unless they are more adventurous in their home matches.

‘What Moyes does away from home to salvage points is another matter entirely, but at home he must play two up front. Moyes may manage at the Stadium of Light – but if he doesn’t see the light soon, not even Defoe and all his goals scoring prowess will save him.’

Wait a minute, didn’t he just bloody win? For the second time in a row? While playing Anichebe and Defoe, who undoubtedly both have ‘goals scoring prowess’?

You know that thing you just did, David? Start doing it or else.

Small-time Crooks
‘I must be honest; I wasn’t sure about Marcos Alonso as Chelsea’s left-back, but that was probably due to having watched Ashley Cole for a number of seasons.’

Garth Crooks: Suspicious of all left-backs who are not Ashley Cole.

Identity theft
What do you do if you’re a journalist looking for some juicy quotes on Jack Wilshere from his teammates and all you get from Nathan Ake is this:

“He seems happy around everyone and he likes playing here.”

Well, if you’re The Sun’s Graeme Bryce you write this:

‘NATHAN AKE claims he has worked out the secret behind Jack Wilshere’s rich vein of form.

‘He says the Arsenal ace is a new man – since assuming the Bourne Identity!’

Yes, that’s exactly what he said.

Incidentally, for anybody in any doubt, the ‘secret behind Jack Wilshere’s rich vein of form’ is that he is an excellent footballer who is finally fit. You’re welcome.

Mangling English With Ian Wright
“You think to yourself, he’s got to start looking at what’s going on for himself, if I am him.”

The ‘him’ in question is Daniel Sturridge; he’s probably glad he’s him himself and not Ian Wright.

Hindsight is 20/20
Do you know what was better than England’s 3-2 win over Germany? England’s 2-2 draw with Spain, if you’re the Daily Mail’s Martin Samuel and you are intent on ignoring facts and using hindsight to make a point.

‘Ultimately, the much-celebrated victory in Berlin proved meaningless. Germany had replaced their most experienced defender, Mats Hummels, with a novice at half-time.’

While of course England faced Spanish veterans Inigo Martinez and Nacho Fernandez, who started the game with a grand total of nine caps between them.

Apparently, ‘Southgate has a strategy that may be of use going forward; the worth of the Germany win was a few positive headlines, no more’.

Like this one where it’s described as a ‘brilliant night for England’, Martin? We look forward to this latest landmark draw with Spain being described as ‘meaningless’ just after it’s proved to be the case.

IT’S CHRIIIIIIIIIISTMAAAAAAS
‘WE are approaching the time of the year of when pantomime villains take centre stage but Diego Costa appears to have put his costume in the loft’ – Charlie Wyett, The Sun.