Home Manchester United Mediawatch: How has poor Wayne been ‘coping’? 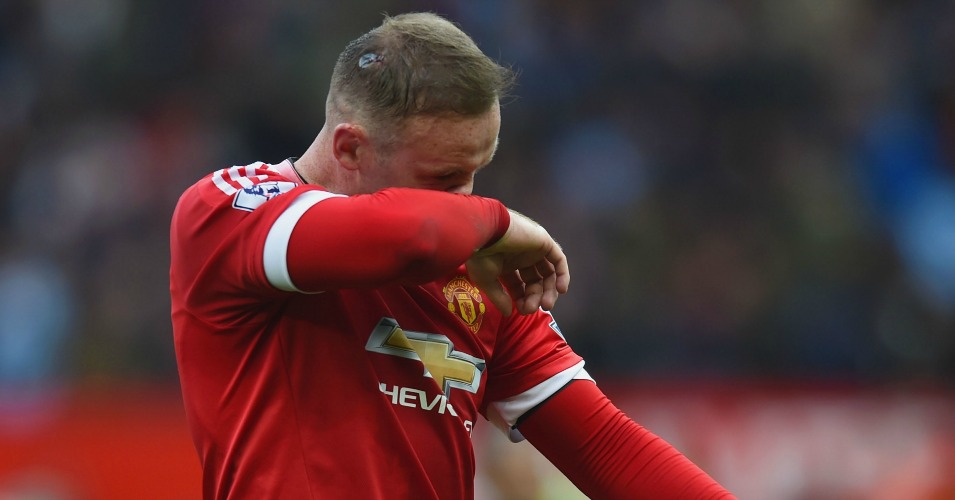 Wayne Rooney: Coping admirably
Long-time readers of Mediawatch may recall this absolute gem from Garth Crooks when picking Wayne Rooney in his team of the week in December 2013: ‘I was speaking to my uncle Ben on Saturday and said that Aaron Ramsey was almost certain to be the unanimous choice for footballer of the year. He took the glass of champagne out of my hand and said: ‘You mean Wayne Rooney, don’t you?’ I told him that he had made a very good point and promptly went home.’

We defy you not to read that at least three times today. Drink it in.

Crooks has had few opportunities to include his beloved Rooney in his team of the week for the BBC, though he often crowbars a mention into praise for other Manchester United players.

Like this from September 14: ‘If Martial is bright he will do exactly what Wayne Rooney tells him and forge a relationship with his captain as soon as possible – a point that seems to have been lost on fellow new signing Memphis Depay. Do what Rooney says, listen to what he says, and don’t try to be an overnight sensation, there’s plenty of time for that. You’ve had a great start now let Rooney and those boys around you make you a star.’

Or this from October 19: ‘Herrera is very fortunate to have such an accommodating captain as Wayne Rooney, who has waited patiently for him and other new arrivals to come to terms with Louis van Gaal’s new system, often to Rooney’s detriment.’

But huzzah, the man himself has scored his first Premier League goal since mid-October so Crooks can justifiably include him (in midfield, of course).

‘The pressure the England captain has been under these past few months has been immense,’ writes Crooks. ‘You would have thought that he picked the team and was responsible for United’s tactics and not Louis van Gaal.

‘He has willingly played out of position and has tried to cope, as best he could, with a style of play that would send a glass eye to sleep. You could feel the relief rippling through Old Trafford when he scored his goal.

‘I hope Van Gaal has a better appreciation of his captain and leader now. Wayne Rooney has conducted himself brilliantly in very difficult circumstances.’

‘Willingly played out of position’? Rooney has started 15 Premier League games this season and only four times has he not played as the most advanced striker. That’s 11 starts as an out-and-out striker reaping just two Premier League goals. He has attempted more shots (41) than any other United player, his pass completion rate is amongst the worst at United and only Anthony Martial and Memphis Depay lose the ball more. But he has ‘coped as best he could’. Poor, brave Wayne.

Warranty
Also in Garth Crooks’ team of the week is Jermain Defoe: ‘If ever a player guarantees a team goals it’s Jermain Defoe. Throughout his entire career he has produced them wherever he’s gone.’

So what is his new Facebook profile picture? The smiling face of Rafa Benitez? Gareth Bale?

No, according to the Telegraph: ‘De Gea’s Facebook page now features the goalkeeper with the Manchester United crest removed from the kit.’

Hmmmm. ‘Removed’ would suggest the crest was there in the first place.

Alternatively, it’s a rather nice piece of artwork that does not feature any logos or badges at all. Or are we to assume that the lack of branding on his gloves means he is set to leave Adidas too?

De Gea has taken the #MUFC badge out of his profile picture.. LUMP on him to Madrid! pic.twitter.com/lhz5bU7wmf

London School of Fashion
Does anybody get the feeling that The Sun’s Charlie Wyett is not overly keen on the ‘five things we learned’ genre?

The toppermost thing he learned from Arsenal’s 1-0 win over Newcastle? That Arsenal’s midfield struggled with Newcastle’s man-marking? That Alex Oxlade-Chamberlain’s tendency to drift inside left Hector Bellerin exposed? Let’s see…

‘ARSENE WENGER does not normally wear a tracksuit – and he should keep it that way. The Arsenal manager looked ridiculous in his ill-fitting garment and should keep his big coat on – even though he struggles with the zip.’

Four other things Wyett ‘learned’ from 90 minutes of football: Petr Cech is pretty good, Arsenal don’t have a lot of strength in depth, Laurent Koscielny is also pretty good and Newcastle – for they were playing too – have restless fans. A sum total of 117 words.

Let’s just call this the Age of Enlightenment.

Flam dunk
To be fair Wyett was far too busy at the Emirates to ‘learn’ much. He was beavering away writing ‘IS this the man who can win the title for Arsenal?’ about Mathieu Flamini. Apparently, Flamini ‘has become the Gunners’ lucky charm, having NEVER lost a Premier League game at the Emirates’.

If only Arsenal didn’t have to play those pesky away games, with Flamini having started and lost Premier League games against Southampton, Stoke, Swansea and Chelsea over the last two seasons alone.

But yeah, ‘GRAND FLAM’ and all that.

Lennon: Imagine
Headline in The Sun: ‘The Alli shuffle…DITCHING LENNON FOR DELE IS MASTERSTROKE FROM POCH.’

1) They don’t play in the same position.

3) Lennon did actually score at the weekend.

On trend
The transfer window is officially open. Currently ‘trending’ on Metro football:

‘Euro League’s best player’ is of course Lokomotiv Moscow’s Oumar Niasse. Who else? And why is his wife already in Manchester? Because she sodding lives there, of course.

And what report is that? Follow the trail via the Daily Express to The Sun. From December 30. ‘Trending’ indeed.

* ‘Major club refuse to rule out selling their best player to Arsenal in coming days.’

Cryptic. It’s Pierre-Emerick Aubameyang. And the word from Borussia Dortmund CEO Hans-Joachim Watzke? “We are not dependent on Aubameyang.”

And where is this report? French newspaper Le 10 Sport (via the Daily Star website). And do they say United ‘agree to pay world record fee’ for Neymar (for it is him)? What’s the French for ‘do they f***’?

What a cult
Also from the Metro: ‘Report: Six clubs on alert as LVG decides to let Man Utd fan favourite go.’

There are other words we would use to describe Nick Powell.

That will be ‘new Liverpool arrival’ Ryan Kent, a 19-year-old winger recalled from his loan spell at Coventry.

Quote of the day
“We’re sat on the top table but we feed off the crumbs. You have to understand that. You have to wait for those crumbs to drop off the table and that hopefully you’re in the right place at the right time to pick them up. And that doesn’t happen at the start of a meal. That usually happens at the end of the meal” – Tony Pulis. Not a messy eater.