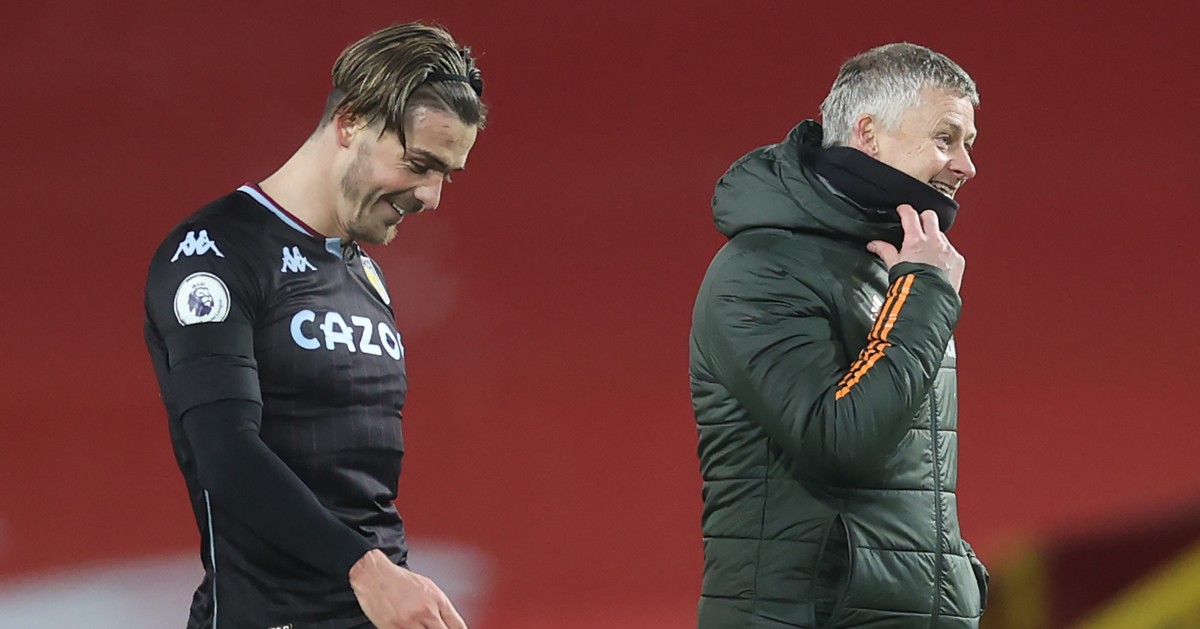 The Premier League itself has come to the rescue of Ole Gunnar Solskjaer by making him play the European champions and other quite good teams.

Greal estate
Mediawatch erroneously assumed that Clemmie Moodie, showbiz reporter for The Sun, would not be gracing the front page of the country’s best-selling newspaper with football-related exclusives any time soon. After all, the last one did not go so well, unless we missed something and Harry Kane really did join Manchester City for £160m.

On Wednesday, ‘the people’s paper’ positively revels in relationship drama involving Jack Grealish. It truly is pulsating stuff that everyone absolutely has a right and desire to know. But in a concerted attempt to make it even vaguely relevant to football, some painful crowbarring of particular terms is required.

‘TRANSFER DEADLINE DAY FOR GREALISH..’ is their take on a man being ‘given an ultimatum by his girlfriend’. It’s really tasteful stuff.

Next up, ‘a source said the pair were meeting to discuss their future’. Which is a convoluted way of saying two adults will have a conversation.

‘The Sun revealed on Saturday how Jack, 26, and Emily, 31, had teamed up at her home and a Manchester hotel.’

This has Pulitzer Prize written all over it.

The best bit is this quote from ‘an industry source’:

“Much of the follow-up to this story has been pretty sexist – trying to pitch two women against each other. The reality is neither woman has done anything wrong.”

Yeah, imagine being so disgraceful and shameless as to do such a thing and encourage abhorrent public reactions…

Today's front page: England ace Jack Grealish was last night given an ultimatum by his girlfriend over telly star Emily Atack: "It's me or her." https://t.co/to34I5fU86 pic.twitter.com/rCJZO5INF1

Saved for later
‘Ole Gunnar Solskjaer’s Manchester United job might have been saved by the Premier League’ is quite the eye-catching headline to see on the Manchester Evening News website.

Before Manchester United supporters start drafting their letters of complaint to the Premier League, let’s see precisely how the top level of English football might have ‘saved’ the current clear favourite in terms of next manager to be sacked.

After a few paragraphs of bluster, we approach the point in question.

‘Although the pressure on Solskjaer remains high, the Norwegian is expected to remain in charge for United’s game versus Watford and if he can survive the Reds’ games against Chelsea and Arsenal, his side will have an opportunity to quickly build momentum.’

Sounds simple. Just ‘survive’ matches against the league-leading European champions and one of the current form teams on the continent and he will be fine.

‘That’s because, after the Arsenal match at Old Trafford, United will play Crystal Palace, Norwich, Brentford, Brighton, Newcastle and Burnley before the new year comes in – Graham Potter’s Brighton are the only team in the top half of the table from those six clubs.’

And Manchester United always batter teams in the bottom half under Solskjaer. Like Southampton. And Aston Villa. And Everton. And Leicester. And that’s just this season.

They failed to beat Crystal Palace last season. Patrick Vieira is doing quite a good job there, beating Manchester City and taking them up to tenth; that, by the way, is in the top half of the table.

Norwich will be a little easier but Solskjaer has already been beaten by their manager this season, while Brentford have taken points off Arsenal, Liverpool and West Ham, Newcastle have a new head coach and Burnley just drew with Chelsea.

‘United will be aiming to win the maximum 18 points from those games and that would certainly ease the pressure on Solskjaer.’

It absolutely would. Winning matches would ease the pressure on the manager. You have nailed it.

Someone should investigate the Premier League over this, mind. They have ‘saved’ Solskjaer by scheduling Manchester United to play some games.

Kane sugar
John Cross of the Daily Mirror assesses the ‘headache’ Gareth Southgate has been left with in choosing a 23-man England squad for Qatar 2022.

He does not particularly fancy the chances of Jordan Henderson, who ‘will be sweating on his World Cup place’ as ‘there is no place for emotion in a competitive squad’.

But there might be a place for one of Southgate’s most-used players, a regular for one of the best club sides in world football, who scored and assisted a goal each a few days ago. Is he really ‘in the lounge’ with James Ward-Prowse?

‘Robert Lewandowski has been the most prolific and successful No.9 in Europe for years, but now Kane looks ready to challenge him as the Bayern Munich striker is growing old gracefully.’

And seamlessly. Lewandowski has 23 goals in 17 club games this season, with eight in ten for Poland since the beginning of June. Kane is on seven goals in 16 club games this campaign, with 14 in 14 for England in the same timeframe. That ‘challenge’ isn’t particularly close and Karim Benzema (15 in 14 for Real, nine in 13 for France) is one of a handful of players who probably want to be part of that conversation before the Spurs striker.

Feat fetish
Over at the Daily Mirror website, Theo Walcott has praise for Mikel Arteta as the Spaniard has accomplished a ‘feat Arsene Wenger could not achieve at Arsenal’.

Getting rid of Mesut Ozil? Managing a season with no European competition? Making everyone talk about “the process” and nothing else?

Nope, nope and nope. Instead, Walcott ‘reckons Arteta is bringing that Highbury fear factor to the Emirates’.

In order since their first season at the Emirates in 2006/07, Arsenal under Wenger finished fourth, second, fifth, third, fifth, fourth, fifth, fourth, fourth, third, third and second in tables based on home league results only. It feels like they might have been feared in their own stadium a few times in those 11 years. But well done to Arteta for managing a ‘feat’ Wenger just ‘could not achieve’.

The big reveal
‘Evra reveals why he chose old Utd pal Ji-sung Park to be son’s godfather’ – The Sun website.

Make sure you’re sat down for this one… they’re close friends and colleagues of six years.

Make sure you’re sat down for this one… he hopes to play in the Champions League with Leeds.