Home Manchester City Mediawatch: Joe Hart is off to Liverpool 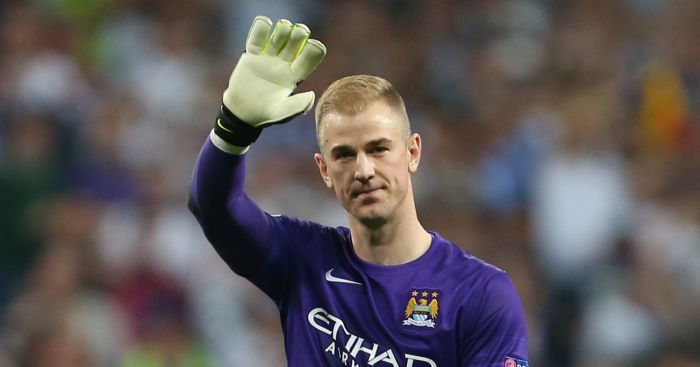 A new low
On Wednesday, The Sun have labelled Antonio Conte ‘The Special Run’, because he celebrated Chelsea’s late goal against West Ham in ‘shiny shoes that looked like they were made only for dancing’.

Be still my beating Hart
‘Liverpool transfer news and rumours: Jurgen Klopp to battle with Everton to sign Joe Hart from Manchester City’ reads the headline on the Daily Telegraph (a proper, serious newspaper) website.

It piqued Mediawatch’s interest, largely because we hadn’t heard much about Liverpool being linked with Hart. Or anything, actually.

‘According to Sky Sports, Liverpool will battle with Everton to sign Manchester City goalkeeper Joe Hart,’ the Telegraph story begins.

The ‘will’ is quite crucial, because it hints at some degree of certainty.

‘The England number one has been dropped by new manager Pep Guardiola in the opening two games of City’s campaign (against Sunderland and Steaua Bucharest), leading to speculation that he could be shown the exit door by the former Barcelona manager. And Sky Sports claim that Liverpool could capitalise on the situation and make an offer as they are still in search of ‘a number one’.’

Very interesting, especially from a source as reputable as Sky Sports. So let’s go to their story.

‘Sky sources understand Joe Hart looks set to leave Man City before the transfer deadline – so where could he end up?’ Sky Sports’ story begins. ‘Here’s a look at the potential options for Hart if he does leave the Etihad, according to the trading room…’

What then follows is a list of clubs that Hart could sign for, according to his odds on Sky Bet. Ah.

Even ignoring the moral aspect of publishing news stories based on odds at your own affiliated bookmaker, the story hardly claims that ‘Jurgen Klopp is to battle with Everton’; it merely lists Liverpool as the second favourites. At the time of writing, Liverpool have been pushed out to comfortable third favourites to sign Hart. Presumably Sevilla are set to ‘battle’ Everton?

‘Sky Sports claim that Liverpool could capitalise on the situation and make an offer as they are still in search of a number one,’ that Telegraph article read. Actual Sky Sports line: ‘Jurgen Klopp has also already signed a new No 1 this summer’.

‘Chelsea transfer news: Cesc Fabregas will stay and fight for his Blues starting spot despite being dropped in favour of N’Golo Kante’ – The Sun, 12.13am, August 17.

‘Blues sources told SunSport Fabregas is NOT seeking a move away from Stamford Bridge and that it is highly unlikely he will leave this summer,’ that second story says.

Might have been nice to ask them before claiming the he wanted to leave less than 15 hours earlier.

‘PEP GUARDIOLA is not in full fire-fighting mode. Not yet, anyway. But there are little blazes breaking out all around him. And unless he extinguishes them quickly, then things are liable to start getting pretty hot.

‘He goes into tonight’s Champions League play-off clash in Bucharest faced with a collection of annoying issues that threaten to disrupt focus on the first target of his debut campaign as Etihad supremo. Pep has plenty of talent to rely upon. But it is difficult to ignore the fact that things around him are all a bit messy. There are plenty of issues threatening to burst into flame.

‘Pep’s first few days in charge, now that the season has actually begun, have been nothing like as controlled and calm as he would have wanted. And those little fires continue to spark up around him…’ – Martin Blackburn, The Sun, August 16.

Looks like Guardiola found a fire engine in Bucharest, or at least a sodding great hose.

‘What next for Raheem Sterling? England’s flashy flop faces uncertain future at Manchester City – The capture of Nolito from Celta Vigo means that Sterling will likely fall down the pecking order under Pep Guardiola ahead of the new season’ – David McDonnell, Daily Mirror, June 30.

‘In the space of two months, Guardiola has revitalised Sterling, culminating in this match-winning display which has all but ­guaranteed City’s place in the Champions League.Having won a penalty in ­Guardiola’s first game in charge on Saturday, Sterling repeated the feat here in Bucharest, as well as adding two assists. And while England team-mate Joe Hart is left to bemoan ­Guardiola’s arrival as he continues to languish on the bench, Sterling has been liberated by the Spaniard’s appointment’ – McDonnell, Daily Mirror, August 17.

Almost as if writing him off was a tad hasty.

And while we’re on the subject…

‘A major bonus for Guardiola and England boss Sam Allardyce was the performance of Raheem Sterling. He suddenly popped out of his shell, all the hang-ups that had beset him last season seemingly gone without a trace’ – The Sun.

Despite your best efforts, we’re obliged to add.

And now we play the rating game
Mediawatch requests that somebody offer a hug and a smile to the person at the Daily Express who compiled the match ratings for Manchester City’s 5-0 victory over Steaua Bucharest on Tuesday evening.

Only one City player (Raheem Sterling) is awarded a higher mark than Steaua’s goalkeeper Florin Nita, while Sergio Aguero is awarded a mark of 6 out of ten, the lowest of any City player.

Slap back to reality
‘Cheeky Rafa in Jaap slap,’ reads the (nonsensical) headline in The Sun ahead of Newcastle’s Championship fixture against Reading.

Blimey Rafa, that’s ballsy. Stam was part of the Milan side who lost the 2005 Champions League final to Liverpool, but Benitez warning him that he is set for more heartbreak is very unlike the Spanish coach. Oh, right, that’s because it’s all absolute b*llocks.

“He played in that game and I don’t think I have seen him since. He won’t have happy memories of that night but it is still a very good thing for Newcastle that he won’t be on the pitch against us tonight.When you’ve experience as a player, then if you are clever enough you can use that as a manager. But it is still the players that make the difference.

“As a manager, you can prepare the team and the tactics can be fantastic, but one mistake can change everything. He was a great player but that doesn’t really matter when it comes to being a great manager, although his team is doing well and playing football.”

Stam’s arse must be red raw after such a slapping.

No, you hang up
‘Confirmed: Midfielder rejects Arsenal after one phone call with Wenger,’ reads the Metro’s headline. It’s a website even Mediawatch tries to avoid.

“I had contact with Arsene Wenger, who spoke French to me. But Ralf [Rangnick] has treated me like a son. He came to France in 2014 to sign me for Salzburg and I trust him entirely.

“I joined RB because it is an exciting club with great potential. I didn’t want to move to a big Champions League club immediately. It’s still too early.”

Ah, the Metro. Your bullsh*ttery is almost modern art.

‘No, Costa is as compelling to watch as ever and losing him back to La Liga would be a body blow to English football, the force of which Diego himself would be proud’ – Chris Cutmore, MailOnline.

Laboured headline of the day

‘Chelsea MUST keep Diego Costa despite latest ugly incident… he might look like Mr Twit but the real twits are those who want him gone’ – MailOnline.

Where SEO and Roald Dahl collide.

Quote of the day

“If Aguero continues to get service like that he could score a million goals this season” – Don Hutchinson, BT Sport.