Home Everton Mediawatch: Stones is off (to the shops)

The Sun have got the inside scoop on John Stones. He shopped in Christian Dior... 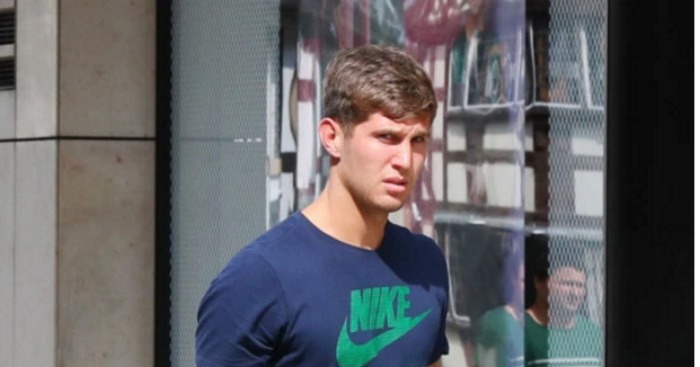 Mediawatch did enjoy Stones’ look in presumed bemusement as he was photographed shopping in a city within an hour’s drive of his home.

‘Accompanied by long-term partner Millie Savage, Stones looked extremely relaxed as he marched around with a number of bags including one from Dior,’ The Sun informs us sagely. ‘The rumours surrounding his future at Goodison Park seemed to have little impact on the 22-year-old as he strolled in the sun, but his impromptu trip across the M62 could signal that an Etihad switch is imminent.’

‘Could’, yes. But also ‘could’ make absolutely f**k all difference to a move that seemed likely anyway and has been talked about for weeks.

Next week: Stones hints at move to Ligue Un. He spent most of June in France.

A sad, sad situation
The Daily Mirror’s chief sports writer is not a happy bunny. Something has seriously upset him: N’Golo Kante has joined Chelsea.

‘The moment we’ve been dreading, the romantics who revelled in Leicester City storming the barricades and winning the Premier League title,’ Kidd begins. ’N’Golo Kante to leave the champions for mid-table Chelsea – and for a piddling £32million too.’

‘Some might have hoped that Kante wasn’t your average money-driven footballer. After all, hadn’t Foxes keeper Kasper Schmeichel revealed that, when Kante arrived in a £5.6m move from French club Caen last summer, the midfielder hadn’t even owned a car?’

Yeah Kante, what a bastard. We would, of course, all turn down more money to do the ‘right thing’. And that right thing must be judged by other people rather than a man making his own career decision for him.

It’s also worth pointing out that Kante rejected a move to China. Moving from Leicester to Chelsea is hardly going over to the dark side.

‘So in the mad world of the £5.1billion TV deal – where Paul Pogba is worth £105m, Sadio Mane has gone for £36m and Liverpool reserve Jordon Ibe has joined Bournemouth for £15m, Kante is a steal.’

‘Leicester rarely make mistakes in their transfer dealings – but agreeing to Kante having a release clause which started the bidding at a mere £20m smacks of the best-run club in the League giving an even break to the filthy-rich suckers they have dispossessed.’

Does it really indicate that Leicester were trying to help out the other clubs? Or does it indicate that Kante has outperformed all realistic expectations since his signing? Obviously if Leicester could have predicted the future they wouldn’t have inserted the clause, but who could have expected this?

‘The theory was that the stratospheric nature of the TV contract would mean that the old elite could no longer plunder less-wealthy Premier League rivals of key assets.’

They still can, just so long as players don’t have release clauses. See Leicester’s pursuit of Burnley defender Michael Keane, for example. Are Leicester the bad guys now?

‘The flash-in-the-pan theorists might be proved wrong yet — Leicester are damned effective at disproving cynics. But this is a step in the wrong direction for the people’s champions. They have to be smarter than this.’

Mediawatch can’t state this strongly enough: They weren’t the champions (people’s or otherwise) when that clause was inserted.

Leicester have made £25m profit on a player in 12 months after identifying and buying a replacement; that’s exactly how this s**t works. Hate the game if you like, but don’t hate the player or his club.

“Our strength is our union, the community, the spirit in the dressing-room. If you make one mistake and bring in the wrong type, one mistake is OK, you can still survive. But if you make two mistakes then the group is not good any more. This season we will play three matches every week because we are in the Champions’ League. Sometimes I will have to rest somebody.”

By Tuesday morning, that quote was given a two-page spread in The Sun, with Graham Bryce writing how ‘the Foxes boss knows he cannot afford to make the mistake that would bring everything he has created crashing to the floor’. Oh hey there, hyperbole.

To continue the hyperbolic theme, The Sun then handily provide a list of six times that ‘dynasties were destroyed’. Err, Ranieri was just talking about buying too many players, guys. And we’re not quite sure that Leicester’s title victory counts as a ‘dynasty’.

But the inclusion of Manchester City between 2014 and 2016 made us snort. They have finished first, second and fourth in the last three seasons, won the League Cup this year, got further in the Champions League than they ever had before and appointed Pep Guardiola. What a bummer.

However, even that didn’t win the prize. Step forward Chelsea 2010/11, when Carlo Ancelotti ‘destroyed Chelsea’s legacy’ by finishing second in the Premier League.

Chelsea won the Champions League, Europa League, FA Cup and Premier League in the four seasons that followed 2010/11. They sure built that new city out of the dust quickly.

Fight, fight, fight
Elsewhere in The Sun, and their ‘team of crack reporters gives you their thoughts on what’s got them excited’ this summer. No, it’s not another rant about air conditioning.

And so to Paul Jiggins, whose ‘biggest surprise’ of the summer is as follows:

‘People asking why Ronald Koeman would go to Everton. The Toffees remain one of English football’s grand old ladies’.

Hats off to whichever lovely person at The Sun arranged these vox pops for putting David Coverdale’s thoughts next to Jiggins’. Coverdale’s biggest surprise?

The red and blue corners are ready.

All very informative, but perhaps they should have told their friends at Football Whispers, those kings of the transfer algorithm? It’s only fair if you’re partners and best buddies.

Negredo ranks 12th on Whispers’ list, below Michael McGovern to Norwich City, while Berahino doesn’t even feature in their top 50.

Still, Peter Ramage to Burnley is no. 23. That’s the one everyone’s really talking about.

Welcome Pogba
Mediawatch took The Sun’s story about Manchester United delaying their squad number announcements until Paul Pogba’s signing was confirmed with the pinchiest of salt pinches, but there was a line in Daniel Cutts’ ‘exclusive’ that did intrigue us:

‘Pogba was thought to have been thrashing out the details of the move with his agent Mino Raiola over the weekend. Raiola has spent the last few days in talks with United chiefs over the France international’s personal terms. He could sign a contract as early as Tuesday morning.’

The clock is ticking…sorry, has ticked. It’s after 12.

Perhaps Mediawatch shouldn’t be surprised that Cutts has the exclusive on Paul Pogba. After all, The Sun’s Deputy Digital News Editor has been incredibly prolific with them recently.

It was an ‘exclusive’ by Simone Togna and Toby Gannon.

Joao Mario to Chelsea: Manchester United target won’t be on the move this summer as Sporting Lisbon rule out sale’ is The Sun’s headline on July 19.

I think we can safely assume the first ‘exclusive’ was a load of old b*llocks.

Actually ‘revealed’: Arsenal made no offer. So they probably didn’t want him.

‘Pep Guardiola ready to pay a ridiculous amount of money for Riyad Mahrez’ – The Sun.

‘Sergio Ramos swaps beard and wonderful look for moustache as he relaxes on holiday’ – The Sun.

‘Swaps a wonderful look for moustache’? What form of English is this?

Headline of the day
‘Klopp: I dream of Gini’ – Daily Mirror.

Recommended reading of the day
Nick Ames with Aaron Cresswell

Scott Salter on data analysis in the lower leagues