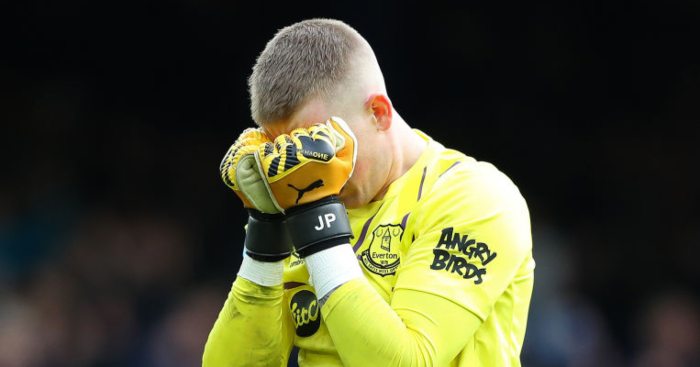 Sprint finish
Mediawatch understands that this past weekend included just three Premier League games between six sides who do not drive particularly high volumes of website traffic. But when The Sun website considers this the biggest story in all of football at Monday lunchtime, we really do all have to contemplate what the point in anything is anymore:

Marbellous
Still, at least it’s not the glorified advert that the Daily Mirror have produced and stuck top of their website.

‘Kings of the Kempinski! Inside Man Utd’s luxury five-star beachfront resort as Red Devils train in Marbella during winter break’

Will the media ever have a winter break from Manchester United stories?

Tiny temperament
When he is not leading a seemingly successful charge for Jordan Henderson to be named PFA Player of the Year, Dominic King is stating in no uncertain terms that ‘only one man can start in goal for England in Euro 2020 – and that is Jordan Pickford’.

He is either the Daily Mail‘s north-west football correspondent or is obsessed with Jordans. Or both.

But another mistake at the weekend – coupled with an impressive performance from Sheffield United’s Dean Henderson – has raised a question about his England stock that King wishes to answer immediately.

‘Pickford had welcomed the discussion about England and understood why the questions had come his way. Gareth Southgate, who holds him in high regard, had been in Goodison Park’s directors’ box for Crystal Palace’s visit but saw him concede a soft goal. Pickford accepted the blame.’

Mediawatch would have loved to have seen Pickford try and point the finger at anyone else for letting a Christian Benteke shot go straight through him.

Then come the Pickford quotes.

“The press and everybody, the punters – look at Gary Neville.”

“They just want to come for England players. Everyone gets stick. That’s part of being an England player. You have to live with it. You’ve got to learn.”

Agreed. It’s regrettable but comes with the territory.

“You just keep it away from your head as the only person who can sort things out is yourself, on the pitch and in training. Every England players gets stick. Some get a lot more praise than others. Look at Joe Hart when he was No 1. He got pelters every week.”

Because he started regressing and was soon usurped by better, more suitable players. You’ve used the worst possible example for your argument, Jordan.

“It’s easy to see. Everyone hates you, for some reason. I just get on with it. I know what I’m capable of and I know what I’m good at. Yeah, it hurts. I know I have been good for England. It’s funny because everyone raves about you when you are with England, but then you go back to your club and everyone wants to slate you.”

It’s difficult not to sympathise; he’s clearly conflicted and struggling with the pressure. Footballers are humans, too.

Those two things are not simultaneously possible.

At this point, King takes over.

‘By his own admission, Pickford’s form has not been as consistent as he would like. His numbers are not as good as those of Sheffield United keeper Henderson or Burnley’s Nick Pope, but the thing that sets Pickford apart – and why he must start at Euro 2020 – is temperament.’

‘He doesn’t dwell on moments in matches and that was proven in the 61st minute.’

It was also disproven in your own fifth paragraph. Referencing ‘punter’ Neville because criticism from back in September had ‘preyed on his mind’ does not say an awful lot for his famed ‘temperament’, nor this supposed refusal to ‘dwell on moments’.

And by association, are you suggesting both Henderson and Pope lack ‘temperament’? It’s not as if the former literally made a high-profile mistake that same month against Liverpool and went on to keep three clean sheets in his next four Premier League games.

Perhaps Pickford should start for England at Euro 2020. It is a matter of months away and he has started 13 of their last 14 games as their first-choice goalkeeper for just over 18 months. But let’s not pretend him keeping his place would be about ‘temperament’ or character more than a reluctance to change too much so soon before a major tournament.

Pick that out
The Mail quite handily provide one revealing statistic to accompany King’s piece.

‘Out of the 20 first-choice keepers in the PL, Jordan Pickford ranks 19th for save percentage this season. He has saved 62 per cent of the shots he has faced – only Chelsea’s Kepa Arrizabalaga has a lower success rate.’

He presumably ranks first for temperament.

Away, the lads
Monday’s newspapers are quite rightly awash with praise for Sheffield United and Chris Wilder. Alan Shearer is chief among those impressed; his column for The Sun proves as such.

‘Amazing performances away at Tottenham, Arsenal and Manchester United have been no more than they deserved for their bravery.’

Sheffield United have the sixth-best away record in the entire Premier League, but you have managed to pick two games in which they never led and scored late equalisers to draw, and one they haven’t actually played. They aren’t due at Old Trafford until March 21. Unless you meant the narrow FA Cup defeat to a 90th-minute Wayne Rooney penalty in January 2016. Which would be weird.

Dawn of the dread
At least Shearer is happy for the Blades. Tony Cascarino fears for them in The Times.

‘They rise above Tottenham to go fifth and can legitimately start dreaming about European football next season. How good can it get?’

Quite. Oh, you’re not finished?

‘Actually, if I followed United I would be dreading a run in Europe next season – it would be a step too far.’

Yes, they should be absolutely petrified at the prospect of a second season in continental competition in their entire history, and first since the Anglo-Italian Cup in 1995. Poor things.

‘Wilder has performed miracles in his three and a half seasons at the club, taking them from the depths of League One in August 2016 to their present dizzying heights. But he has done it by being realistic about the resources at his disposal and what he wants out of them. A Europa League campaign next season is the last thing he needs.’

There is something genuinely hilarious about pitching Europa League football as ‘the last thing’ that Sheffield United need with right now. That is some sensational logic.

Drop off now and finish 15th, guys. Playing in Europe three years after being in League One just isn’t worth it.