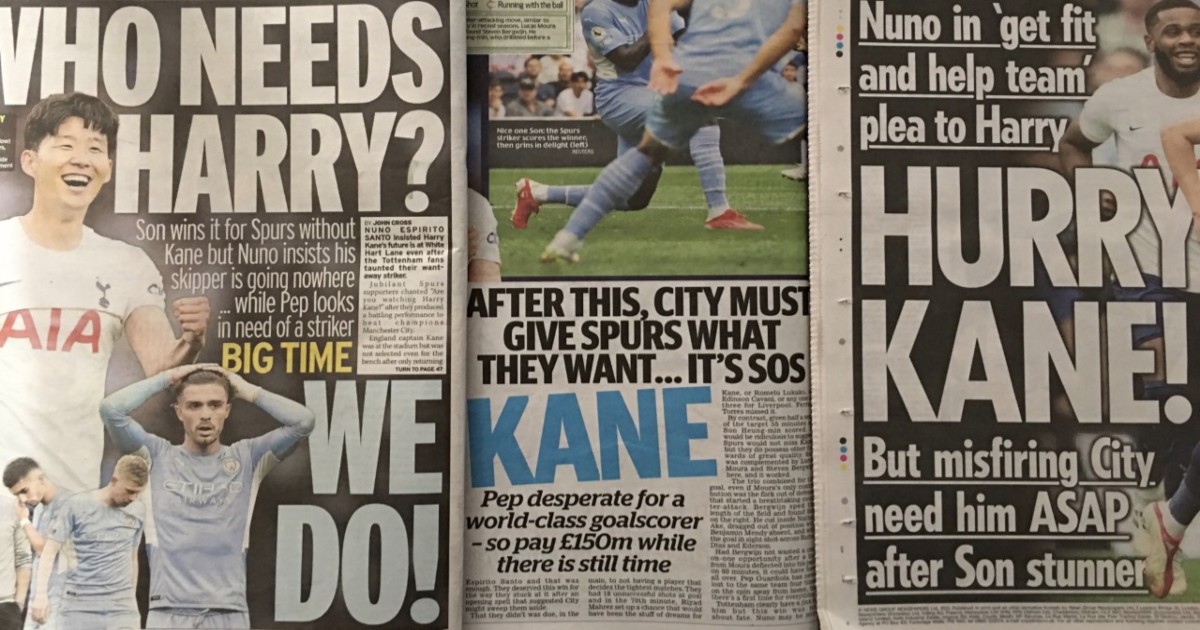 Jack Grealish absolutely has to avoid being the next Riyad Mahrez. Spurs beating Manchester City does nothing to quell the Harry Kane talk.

But the Levy was dry
One might have assumed the media campaign to get Harry Kane to Manchester City encountered a stumbling block on Sunday when Tottenham won against the interested club without the striker even playing. The story would now have to be that a side in supposed disarray beat the Premier League champions while their best player watched on.

Or not. Martin Samuel of the Daily Mail doubles down on his stance over the formerly ‘sweetly naive’ striker:

‘Perhaps this was the performance that might persuade Daniel Levy £150million is more valuable to his club in their present economic state than one, admittedly fabulous, player.’

Fun game, this. And one Paul Jiggins of The Sun joins.

‘Son Heung-min showed Spurs there is life without Harry Kane.’

Son Heung-min showed Spurs – shockingly enough – have some other good players and an accomplished manager.

‘As for City, they were treated to a glimpse of what the future could be like if they do not sign Tottenham’s £160million-valued striker – and it was not pretty.’

So pay £160m. Your own newspaper said he was ‘set to’ move for that price upon Levy’s ‘acceptance of defeat in his battle to keep the England captain’ in July.

Remember how that showed ‘how far the North London club has fallen in the last couple of years’? Sunday suggested otherwise.

Kane relief
‘Wherever the Three Lions skipper was, the chances of City stumping up the cash Daniel Levy wants for his striker surely increased after this,’ writes Jiggins in his closing paragraph.

The Daily Mirror join everyone else in desperately trying to sell Kane, with John Cross adding that: ‘One team showed there can be life after the England captain and, for the other, here was proof of why they must break the bank to get him.’

The headline to that piece? ‘NO KANE, NO GAIN’. The sub-headline? ‘Toothless City show why they must break the bank to snap up Harry as Son shines for super Spurs.’

Has the winning club ever been so thoroughly undermined and ignored in the aftermath of beating the Premier League champions?

Tottenham win and all the headlines are still desperately trying to sell their best player to the team they just beat. pic.twitter.com/ApUVA9oa40

Riyad to nowhere
Charlie Wyett of The Sun had other subjects in mind at White Hart Lane, such as Jack Grealish:

His third paragraph: ‘Yet the only major issue as he left the pitch yesterday was the pain of defeat after a frustrating and largely unspectacular Premier League debut for Manchester City.’

His eighth paragraph: ‘Yet Grealish, who relegated Kevin De Bruyne to the bench, delivered a Grealish type of performance.’

So it was both ‘a frustrating and largely unspectacular display’ and ‘a Grealish type of performance’. Typical Jack, so annoying and ordinary.

‘Most importantly of all, he must ensure he does not become the new Mahrez.’

Yes, how dreadful it must be to play at least 44 games, score at least 12 goals and get at least nine assists in each of his three full seasons with Manchester City, winning two Premier League titles, one FA Cup, three League Cups and starting in a Champions League final in the process.

Whatever you do, Jack, the most important thing is to avoid that dreadful fate. Best of luck.

Don’t mention the VAR
‘Briefly silenced, the packed-out away end were giving it large again when VAR handed the Hammers a goal’ – Oscar Paul, The Sun.

VAR ‘handed’ the Hammers nothing. VAR ensured a perfectly legitimate goal was allowed to stand after initially being ruled out.

A new season but the same old inflammatory language designed to stoke the fires of tribalism and further vilify officials. Lovely.

Like a Virgil
Virgil van Dijk played some football on Saturday. It was his first competitive Liverpool game since last October. It was great to see him. And it means the fawning can return. Charlie Wyett leads the way:

‘Virgil van Dijk has always appeared super-human. A colossus of a defender who, along with keeper Alisson, was the signing that transformed Liverpool from contenders to champions.

‘Yet Van Dijk, 30, insists he is normal like the rest of us and will need time – lots of it – as he tries to overcome the physical and mental scars of a career-threatening injury.’

He ‘insists he is normal like the rest of us’. Good lord. And then there are these headlines:

Charlton athletic
And yes, BBC Sport still know those Garth Crooks clicks are irreplaceable. Who else is going to mention Cyril Knowles, Ruud Krol and Frank Stapleton in a column in 2021?

The sight of Heung-min Son at wing-back will give Tottenham supporters heart palpitations but, as per, it is his section on Paul Pogba that raises an eyebrow.

‘I’ve said it before and I will say it again. When Paul Pogba is on song, he’s practically unplayable. The France World Cup winner provided more assists against Leeds in their 5-1 drubbing than his entire total last season. How is that possible?’

Different tactical deployment? Better and more settled team around him? The return of fans? Any of the above?

‘A player of Pogba’s ability only made three assists in 2020-21. He cut Leeds to ribbons in a display of precision passing I’ve not seen at Old Trafford since the likes of Bobby Charlton. But therein lies the problem with Pogba. You get all or nothing with him – unlike the great Charlton.’

Paul Scholes wants a word. And honestly, which other modern player has an excellent performance undermined by the caveat of ‘Not quite as good as that bloke from the 1960s, though, is he?’