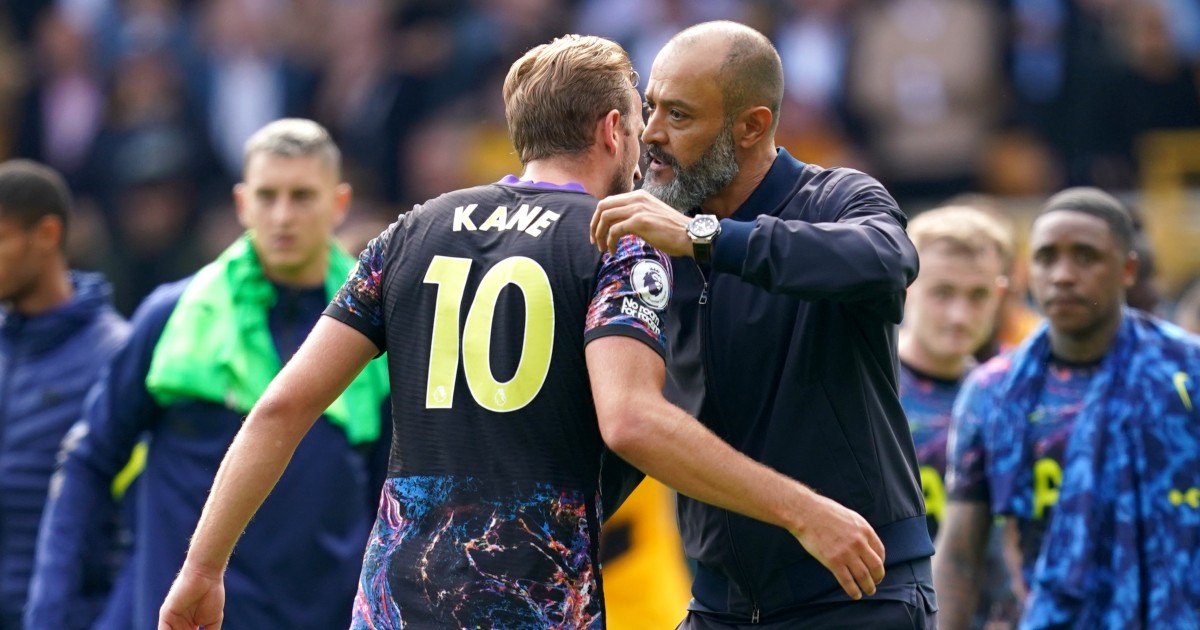 There is a week left for The Sun to will their Harry Kane exclusive into existence; the panic is palpable. They even take aim at The Athletic.

Well hung
Breaking news: Charlie Kane has been on the phone to Duncan Wright of The Sun:

‘HARRY KANE has told Spurs he STILL wants to go – and feels he is being hung out to dry by the club.

‘Time is running out for Manchester City to come up with the £150million Daniel Levy is demanding before the transfer window shuts in six days.’

That is a shame because it has taken 33 days for Levy to drop his valuation of Kane by £10m. Perhaps Manchester City will wait another five months for the Tottenham chairman to bring the fee down to a round £100m?

Mind you, it is strange that Levy ‘is demanding’ anything. The bloke ‘caved’ when Kane was ‘poised’ to join Manchester City for £160m on July 23.

And no, this latest update does not make the front page. How bizarre.

Wright or wrong?
‘Their chairman’s acceptance of defeat in his battle to keep the England captain has realised their worst fears…Kane’s departure is now inevitable’ – Paul Jiggins, The Sun, July 23.

‘The player has spoken with boss Nuno Espirito Santo and Levy to find some common ground, with the likelihood now that he will end up staying’ – Duncan Wright, The Sun, August 25.

Fighting Espirit
An exclusive that completely contradicts their own biggest scoop of the year from just over a month ago is inexplicably not the worst thing to be printed in The Sun on Wednesday. Charlie Wyett handles that one.

His insider column claims that Tottenham players ‘have yet to truly warm’ to Nuno Espirito Santo, who is living up to his ‘extremely grumpy’ reputation.

The atmosphere sure did look frosty when he hugged everyone after beating Wolves. Oliver Skipp said this week he “can’t compliment him enough” and Ben Davies described him as “refreshing” after helping build “a togetherness within the group”.

You can cut the tension with a knife.

But Wyett took to Twitter to clarify the situation:

Been at both games and players worked incredibly hard. Did not say they were not playing for him or the club.

Manager is not best friends with his players but they maintain a healthy and thus far fruitful professional relationship. What a get that is.

But Nuno ‘has not only been questioning the commitment of Harry Kane to Tottenham‘ (a reminder that his most recent quote on the striker was “he did well, he helped the team” and at every stage he has been pretty supportive of a player who desperately wants to leave).

In fact, in a team meeting, Nuno went around the room and, sort of David Brent style, asked all the players individually, ‘Do you want to be at Spurs?’.

The update here is presumably that Charlie Wyett has never watched The Office. And that a new manager *checks notes* asked players about their commitment to the club.

‘However, even though some at Spurs Lodge are struggling with his frosty man-management, no one will care if Tottenham keep on winning.’

‘Some’ being Tanguy Ndombele, Moussa Sissoko and anyone else not currently playing. Maybe the problem is that they are at Spurs Lodge – the training ground Tottenham left in 2014. No wonder Nuno has been ‘frosty’ if they haven’t rocked up at Hotspur Way yet.

New Dele
But this is brilliant from Spurs.

It's all smiles in training! 😁 pic.twitter.com/jjL7wcZbcH

Big time Charlie
The Athletic can only dream of uncovering such stories. Those dafties reported on July 18 that ‘Nuno has made a positive impression on the squad in his opening weeks’. That must have been before the typical Brentisms.

Anyone working for The Sun is required to have an inbuilt hatred of The Athletic, of course, and Wyett is no different. He saw their recent article on Arsenal’s new purchase and his interest was piqued:

‘There was a 2,000-word article in The Athletic titled: Why Arsenal Signed Aaron Ramsdale.

‘It was written by James McNicholas and there was some decent background stuff in there.

‘Maybe it helped that the agent for Ramsdale is Charlie McNicholas – the writer’s brother.’

A journalist for The Sun, there, sniping at an outlet potentially using someone’s sibling to get inside information. Charlie KaneWyett is not impressed.

Silly Athletic. Stop cheating. Do it the old-fashioned way and let your showbiz reporter listen to gossip at someone’s wedding and stick it on your front page as embarrassing but exclusive nonsense that your presumably well-sourced football writers – none of whom talk to anyone’s brother ever – have to pretend is gospel for the rest of the summer.

The pot is most certainly calling the kettle black here but what remarkably snide b*llocks from the nation’s best-selling newspaper.

Gerrard knocks
Completing the Wyett hat-trick is the fact that Steven Gerrard’s managerial spell at Rangers ‘is turning into a public relations disaster’.

‘Gerrard, 41, took over at Ibrox in 2018 and last season led them to a first title in ten years without losing a game.

‘Yet relations with the media were still poor. Now, Rangers are demanding £25,000 per news outlet for club access.’

Ah. By ‘public relations disaster’ you mean ‘it is quite difficult for the media to get interviews and exclusives’. Which is definitely the same thing.

You can tell this whole saga is a ‘public relations disaster’ for Gerrard by the fact Mediawatch is literally only just hearing about it and also is struggling to care.

In for the Kyl
‘Details of Kylian Mbappe’s private chat with Jurgen Klopp amid Liverpool transfer link’ – Daily Mirror website.

The details: the ‘private chat’ happened in 2017, as told by Jamie Carragher – who divulged no particulars on the conversation as he did not know – in February.

Oh, hold on, does The Sun website mean all three combined? If so, also yes.