Plus Rooney's bizarre send-off, a changing mood at Manchester United and ripping up... 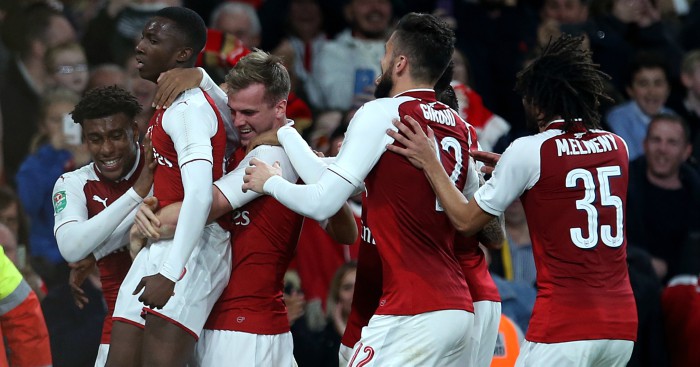 Balls
‘Is this the worst excuse ever? Guardiola blames the BALL for failure of Man City’s team of superstars to scores against Wolves’ – Mail Online.

And is that the worst headline ever? If you’re going to make this the biggest story in football by putting it top of your football homepage, at least spell all the words correctly.

Kick them out
‘Arsenal and Manchester City face disqualification from Carabao Cup or could be forced to replay fourth-round ties after making too many substitutions in extra-time,’ reads The Sun’s headline on Wednesday morning.

No, they really don’t.

‘THE CARABAO CUP descended into fresh farce with Arsenal and Manchester City dragged into a substitutions probe,’ Norwich fan Charlie Wyett writes. ‘Arsenal needed extra-time to beat Norwich 2-1 and City saw off Wolves in a penalty shootout but both are waiting to discover if they broke rules over subs.

‘The Premier League giants made four changes – two in extra-time – and the Canaries will demand clarification from the Football League. Four subs are a novelty for cup ties this season but the rules imply only one can be used after 90 minutes.’

Again, no they don’t. Norwich fan Wyett’s claim that making two subs in extra-time will cause Arsenal and City to be kicked out of the competition is wildly speculative at best, and downright inaccurate at worst.

The clue might be in the EFL officials clarifying on Tuesday night that no rules were broken, but Norwich fan Wyett might also have liked to do a little research before publishing his story.

Were Bristol Rovers disqualified or punished after they made two changes in extra-time in round two? No.

Were Bournemouth disqualified or punished after they made two changes in extra-time in round two? No.

Were Brighton disqualified or punished after they made four changes in extra-time in round two? No.

Were Burnley disqualified or punished after they made two changes in extra-time in round two? No.

Were Brentford disqualified or punished after they made two changes in extra-time in round one? No.

Were Portsmouth disqualified or punished after they made two changes in extra-time in round one? No.

Were Cardiff City disqualified or punished after they made two changes in extra-time in round two? No.

Did Wyett read the rules, misinterpret them and make a snap judgement? Oh yes.

‘The Gunners made a total of four subs, making use of the rule that you can use one added change when a tie heads to extra-time,’ a subsequent The Sun story reads. ‘Arsenal made TWO in extra-time, causing some debate among Twitter users to suggest that Arsene Wenger had broken the rule.’

What a difference two months make
‘THERE is a smile back on the face, a glint back in the eye. There was a fear the real Jose Mourinho had been lost. Worn down by too many battles, too many fall outs, too much emotion spent on lifting great clubs up and putting them back on the road to glory. But this is a man made of strong stuff.

‘The size of a task that seemed to overwhelm and even bemuse the two managers who went before him was not going to beat him The man management of the whole club that he has shown in just over a year in charge has been truly impressive.

‘The spirit was gone, the club had become listless. There was far more to mend than a dysfunctional team that was boring the pants off Old Trafford when Mourinho arrived. He has done that with his words, his passion.

‘While there is nothing like dominating, there is even more excitement about a comeback when you have been written off. About rising again when there have been others milking their time on the throne you once called your own’ – Neil Custis, The Sun, August 15 (after one league game of the season).

‘MANCHESTER UNITED’S training ground is “like a morgue” with the atmosphere the “lowest since Jose Mourinho arrived”.

‘The Red Devils lost their first Premier League match of the season on Saturday, a 2-1 defeat at lowly Huddersfield. United’s recent performances have also been below par, drawing at rivals Liverpool and scraping a win at Benfica.

‘And insiders at their Carrington complex have revealed how their top stars have taken the poor run badly. It is also understood a number of first-team players are upset over Mourinho’s recent comments about PSG’ – The Sun, October 25.

Those ‘words and passion’ might have made things worse again.

Judgement day
Speaking of Custis, given the events of the last few weeks it’s worth revisiting what The Sun’s Manchester man said on Sky Sports’ Sunday Supplement at the end of August:

“I don’t see any progress from last season at Manchester City. I still think a lot of players, particularly at the back, don’t know what they are supposed to be doing.

“I think whereas Jose Mourinho simplifies football, Pep Guardiola over-complicates it. Again with the short passing, again with not clearing their lines and stuff like that. It just seems very complicated, what they are trying to do. I just don’t see any progress from last season.”

Complicated seems to be working just fine. As does the short passing.

A fond farewell
‘It’s no-go for Roo’ reads the headline on the back of Wednesday’s The Sun. By the time Charlie Wyett’s exclusive hits the website, the pun has got worse: ‘Roo kidding?’

Wyett’s story is that Wayne Rooney will not be called up by Gareth Southgate for next month’s friendlies in order to give him a Wembley send-off. This is something that Mediawatch had not even considered as a possibility, so ridiculous does it sound. Did Gary Lineker, Bobby Moore or Bobby Charlton get this treatment? No.

‘There have been calls for England’s record scorer to be included in the squad for next month’s friendlies with Germany and Brazil to allow him a big send-off,’ Wyett writes.

Have there? By who?

The answer to that particular question appears to be Charlie Wyett himself, who proceeds to make the case for picking Rooney for a friendly just so he can say goodbye to England fans:

‘WAYNE ROONEY earned 119 England caps – his last coming at home to Scotland in a 3-0 World Cup qualifying win 11 months ago.

‘It is a shame he will not get a 120th in a retirement tribute game, the same way Lukas Podolski ended his Germany career against the Three Lions in Dortmund seven months ago. Traditionalists will squirm at this idea of a Hollywood-style ending, and I totally understand.

‘As manager Gareth Southgate pointed out, our World Cup winners got nothing like that. But times change. There would be an appetite among England fans to see Rooney a final time.’

Would there? Most England fans Mediawatch knows were sick enough of Rooney clogging up the midfield before his international retirement, never mind afterwards. And why does he have to be on the pitch to say goodbye anyway? Just get him on the pitch at half-time, if we absolutely must. For what it’s worth, Mediawatch suspects that Rooney doesn’t give a shiny sh*te about a farewell match.

Gareth Southgate has four England matches before naming his provisional World Cup squad, at a time when the England team is getting flak for its performances. Is it really worth deprioritising two games against the best in the world to make a mawkish, meaningless tribute? It’s a no-go from us.

Ripping it up
‘Jurgen Klopp set to rip up Liverpool defence after another shocking show in bid to save their season’ – The Sun.

Actual story: Klopp will use Joe Gomez in central defence over Ragnar Klavan. As he did on Sunday and as everybody expected he would continue to do.

Peak Charlie Sale
‘The clients of former FIFA media chief Walter de Gregorio’s new consultancy include agent Jorge Mendes. So when De Gregorio was a guest in Harry Kane’s Wembley box for Tottenham’s victory over Liverpool last Sunday, the conspiracy theorists soon had Mendes masterminding a Kane transfer. But it turns out that De Gregorio had been invited to the match by Kane’s existing agents CAA’ – Charlie Sale, Daily Mail.

Mediawatch has checked (yes, still that sad) and Google returns no results for people linking Kane and Mendes. A Twitter search indicates that not even a single tweet was sent on the subject.

Recommended reading of the day
Jonathan Wilson on post-Cruyffian managers.