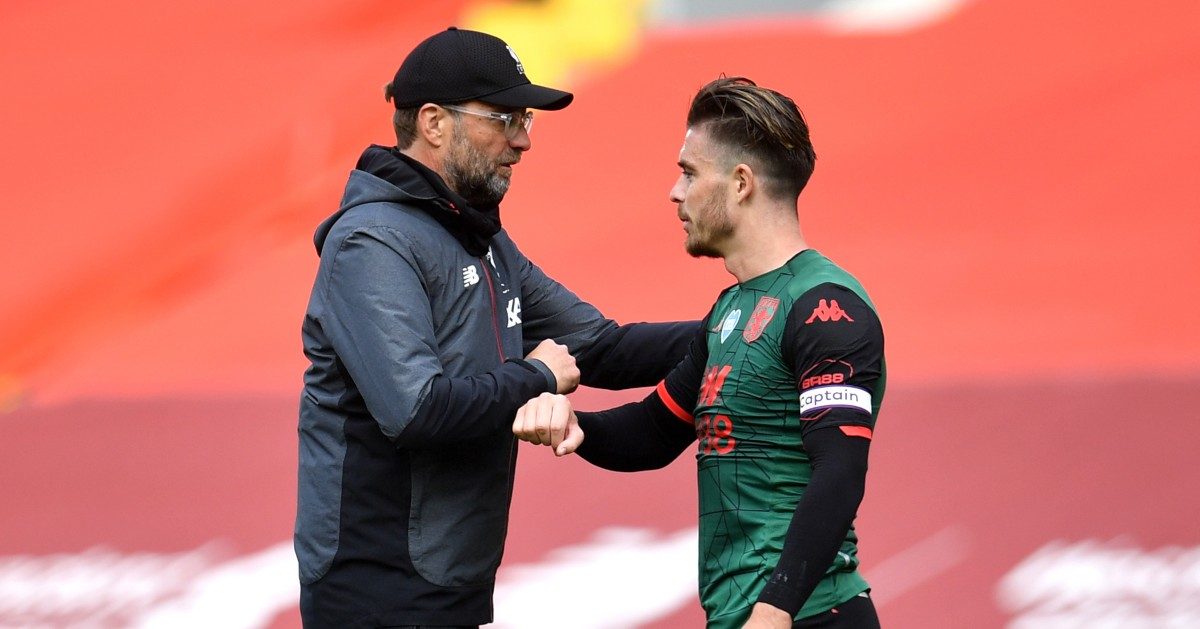 Liverpool manager Jurgen Klopp told the press to “write what you want”. And so they absolutely did. Plus, Man Utd messed up with Jack Grealish.

Now Mediawatch kind of gets it in terms of Mancini’s Manchester City past, but what is the ‘surprise’ about Manchester United targeting a Premier League-winning coach who has just led Italy to victory at Euro 2020 and has a reputation for developing younger players? It would be a ‘surprise’ if he wasn’t considered, particularly when seven other managers are named in the article because that is how a shortlist works.

Revenge is a dish best served absolutely freezing
Jurgen Klopp’s attempts to take the sting out of the upcoming Merseyside derby have been equal parts admirable and futile. In describing it as not his “favourite game of the year” and saying “I really very often don’t like the intensity” because “very often people put too much in”, he seems to have offended the journalists who would rather he prepared for this game by donning war paint and pledging to eat Jordan Pickford’s knee ligaments as a post-match sacrifice.

Therein lies the reason why Klopp and his players want to treat this as another football game in a packed schedule of many more football games: they suffered two long-term injuries that derailed their entire season the last time things were allowed to get out of hand against this opponent at this stadium.

But some in the media are not about to help them dampen the fire.

The Daily Mail call this a ‘grudge match’ in which ‘Liverpool seek revenge’ for those tackles in October 2020, with Klopp himself called ‘unusually terse’ and unable to hide the ‘body language’ that told us ‘the memory of it all gnaws away at him’.

Of course, nowadays anyone can see for themselves just how apoplectic Klopp truly was. Look at him, all thirsty for ‘revenge’.

The headline claims that Klopp ‘bristled’ – the MailOnline use ‘tetchy’ and say he ‘snapped’ at one question after the first part of the press conference – but it seems to be Dominic King who suddenly becomes very annoyed or offended at what somebody says or does (Oxford dictionary definition for ‘bristled’) when the Liverpool manager ended a fairly long answer with “apart from that, it’s just a football game”.

‘Not necessarily true,’ writes King of what is, in fact, just a football game, before going into detail on the ‘frenzy’ and ‘fraying tempers’ which could ‘erupt’.

Still, well done for ignoring Klopp and his players by pretending they want ‘revenge’ and that the manager was furious at the mere prospect of returning to Goodison Park. And for taking him a little too literally when he said: “I cannot help you with the stories you want to write today. You write what you want.”

Mirror, Mirror
In the interests of fairness, then, well done to David Maddock and the Daily Mirror headlining their Liverpool-slanted preview thus:

The article points out that ‘Liverpool clearly still harbour anger and resentment’ over their last visit to Goodison Park, but Maddock refers to ‘Klopp’s calm’ as he ‘tried to play down the heat of the derby’.

Paul Gorst of the Liverpool Echo, meanwhile, says Klopp ‘appeared desperate to avoid’ creating headlines, that he showed a ‘determination to ignore the badge on the shirt of the opposition’ and ‘the anger that swelled after their last trip has long since subsided’.

Neither the Mirror nor the Echo seem to think Klopp was in any way ‘bristling’ or ‘terse’ or ‘tetchy’ or desperate for ‘revenge’. Weird.

How can one press conference be viewed in two such contrasting ways?

Mistake p*sstake
In some classic Daily Mirror website-ing, they have rifled through an article totalling more than 1,800 words and plucked out the briefest of Manchester United mentions.

Here are the three paragraphs in which the Daily Telegraph and Jack Grealish talk about the club in question:

‘Last year, he was targeted by Manchester United, under their former manager Ole Gunnar Solskjaer.

‘”I was really close to going, but nothing happened in the end,” he says. “We played United in a pre-season game on Saturday and I wasn’t supposed to play in a cup game at Burton. But after the United game I said to Purslow and my agent ‘if I’m not leaving, I’ll sign my new contract’.

‘”I went in with my dog on Tuesday morning, signed the deal, and played later that day. We all agreed on the clause and if any team hit that, it’s a win-win because it means I’ve had an unbelievable season and Villa got £100 million.”

That is it. Nothing more whatsoever on United. Yet those quotes lead to this from the Mirror:

The ‘mistake’? Well that would be ‘failing to complete a deal’ to sign Grealish. Who would have cost an absolute bomb at the height of a global pandemic, and at a time when Manchester United had already spent around £80m, including on players in Grealish’s position.

Plus, is it really fair to call that a ‘mistake’ when Grealish has two goals and three assists in 15 games with a much better, more attacking team so far this season? He’s hardly proving them to be absolute fools for not jumping at the chance to sign him.

But the Mirror have that second bit covered:

‘By his own admission, Grealish has found it difficult to adapt to playing for one of the best teams in the world, but he will surely make good on his hefty fee.’

‘And when he does, it will only go to show the mistake that United made by failing to complete a deal last year.’

‘Losing out to a player such as Grealish, set to be one of the Premier League’s biggest stars, is obviously not a good look for United.’

Losing out on. And being eighth is not a good look for United. Being run by people who seem to be bad at making footballing decisions is a bad look for United. Turning down the chance to spend nine figures on a player in a position in which they are already pretty well stocked is a perfectly sensible look for United.

‘And it only highlights the work that Rangnick has ahead of him when he finally has his work permit approved.’

Not sure they are bringing him in so he can persuade the Glazers and Ed Woodward to sign players for £100m.

But listen up, Rangnick, because ‘ensuring that United do not miss out on players of the calibre of Grealish to their closest rivals will be a key target for the German’s spell, both as interim boss and in the executive team’.

Of course, his actual ‘key targets’ will be maximising the abilities of the current under-performing squad and identifying upcoming talent around the world, not measuring d*ck sizes against Manchester City in the transfer market with expensive transfers. Doing that has been one of the reasons they are in this mess. Remember Alexis Sanchez?

Ince pie
It is about time that Paul Ince handed out some advice to Manchester United and their new interim coach. The MailOnline are on hand:

Genius. Ralf Rangnick should try and help Manchester United’s two regular full-backs become among the best in the world in their position. Between this and ‘Shoot’, how is a mind like Ince’s currently out of management?

Ballon pump
The Daily Mirror website, bless them, are still trying to hoover up whatever is left of those sweet, delicious Ballon d’Or clicks. This one is excellent:

To be fair, Cristiano Ronaldo probably is the kind of person to crow about having the most career Ballon d’Or points, despite Lionel Messi winning two more of the awards and having played for fewer seasons.

Cryptic crossword
But this one is phenomenal:

It is at this point that Mediawatch usually lists three absolutely hilarious and completely zany possibilities for what this ‘cryptic message’ was, but we actually have no idea what Kylian Mbappe could have said about the award that hinted at a transfer to Real Madrid.

And then you see the quote in its entirety:

“Of course my goal is to win a Ballon d’Or title or several of them, but there is a process to achieve it.”

Wow. Alan Turing himself couldn’t have cracked that.