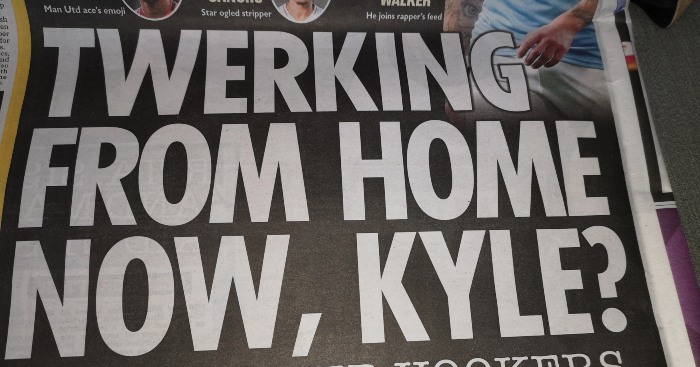 Hysteria
Our first question is why it’s news. There cannot be many folk stuck at home who have not ‘ogled’ somebody or something online this week. We all know the W in WFH does not stand for ‘working’.

Because of course it’s news that Kyle Walker has been ‘ogling strippers online’ because he is – as described by the opening line of Stephen Moyes’ exclusive in The Sun – a ‘serial lockdown idiot’.

And what makes him ‘a serial lockdown idiot’? Well, he had a sex party with hookers (idiot) and then went for a walk with his children and stopped to talk to Wayne Rooney because his kids go to the same school (erm…), so everything he now does is news.

Our second question is how The Sun’s Stephen Moyes knows. Was he also ‘cheering naked girls on a live video stream as he obeyed isolation rules’?

Moyes did at least log off for long enough to source a ‘source’, who told him: “I don’t think England boss Gareth Southgate, or the players’ club managers, will be enamoured at their stars participating in these kind of tawdry sex shows. But at least Walker and Co are getting their kicks from home and following isolation rules.”

‘Participating’? Since when did watching from home and knocking one out become ‘participation’? Mediawatch suspects neither Southgate nor any other club manager – of Marcus Rashford, Jadon Sancho or Raheem Sterling in this case – would give a shiny shite about this story. We particularly suspect that Pep Guardiola has other things on his mind. Oh and ‘Walker and Co’? Who the hell says ‘Walker and Co’? The same people who say ‘England ace’?

‘Days later he was ticked off by cops for breaking social distancing rules with next-door neighbour Wayne Rooney, 34, during a stroll in Prestbury, Cheshire.

‘But now Walker, 29, has worked out how to score without even leaving his settee.’

We are fully in favour of the implication that he was trying ‘to score’ with his neighbour Wayne Rooney but could not help but laugh at the notion that a young man would have to ‘work out how to score without even leaving his settee’. How did he fathom this? Google?

Finally, there is nothing better than trying to describe emojis and transcribe young people’s web speak (that’s what they call it, right?). So enjoy this:

* ‘Walker lapped up the smut, adding a “hysterically laughing” emoji to the scrolling comments when the stripper showed off her boobs.’

* ‘Borussia Dortmund’s Sancho, 20, linked with a £100m summer move back to England, added three ­emojis — the “eyes” used when a person is attractive, a “hysterical laughter” sign and a loveheart.’

* ‘He chipped in “weee backkkk” in response to Zia saying hello to her armchair audience. And as she ­jiggled her naked buttocks, Sancho added “winning”.’

* ‘Man United striker Rashford, 22, offered a “crying with laughter” emoji as Zia and others got naked.’

One question remains: Since when did young men find tits so funny?

Kyle Almighty
In the Daily Mirror, Stan Collymore suggests that Kyle Walker has ‘a God complex, which is a shame because he’s a good lad’.

“He’s been amazing for us. The maddest thing is he hasn’t actually been there that long but what he’s brought in and the quality he has – of course on the pitch – but inside the dressing room as well. He’s a leader for us too.”

If you immediately thought ‘well, Man Utd star Luke Shaw has confirmed Bruno Fernandes dressing room suspicions there’, then congratulations for you are Jake Polden of the Mirror website and you have a virile imagination conducive to clickety-clicks.

Feel the strain
The Daily Mail have produced an in-depth feature – enlisting the help of football finance expert Nick Harris – detailing how much each Premier League club will lose if the season is cancelled. It’s an interesting read and suggests that several loss-making clubs like Brighton and Everton could be in serious trouble.

Interestingly, Manchester United are never once mentioned in the article despite standing to lose the most money – because it’s all relative and their financial might means that they can absorb those losses.

So obviously this is how it is sold on MailOnline…

‘REVEALED: The huge sum EVERY Premier League club will lose if coronavirus voids the season, with United missing out on £116m and Liverpool’s U-turn meaning it’s toxic for clubs to furlough staff’

…because of course it is.

And obviously it doesn’t end there because the Express website want a slice of the action:

‘How much Man Utd, Liverpool, Chelsea and rivals set to lose if Premier League season axed’

They tell us that ‘Manchester United will be the biggest financial loser if the Premier League is cancelled and all previous results for the season are annulled’ in the most simplistic possible interpretation of this situation.

It is truly shocking that the clubs with the highest turnovers ‘lose’ the most money when a percentage of that turnover is lost. This is like saying that everybody in Britain has to take a 50% wage cut and announcing that Richard Branson is the ‘biggest financial loser’.

‘There are three clubs who will lose over £100m in total but the Red Devils would feel the biggest financial strain.’

No they bloody wouldn’t; they declared £627m of revenue in September.

Crowbar of the day
‘Liverpool dominate Manchester United and Man City in Carragher’s team of the season’ – Liverpool Echo.

Yes, they certainly have dominated a side with literally no representatives in Carragher’s team of the season but who just happen to have the most fans in the world.

Propaganda of the day
‘Manchester United have got all 14 transfer decisions right’ – Manchester Evening News.

That must be why they are in fifth place and 37 points behind leaders Liverpool; they absolutely nailed everything. They particularly nailed allowing Ander Herrera leave on a free transfer without replacing him and then nailed selling a striker for £75m and not replacing him either.

They are so bloody brilliant.