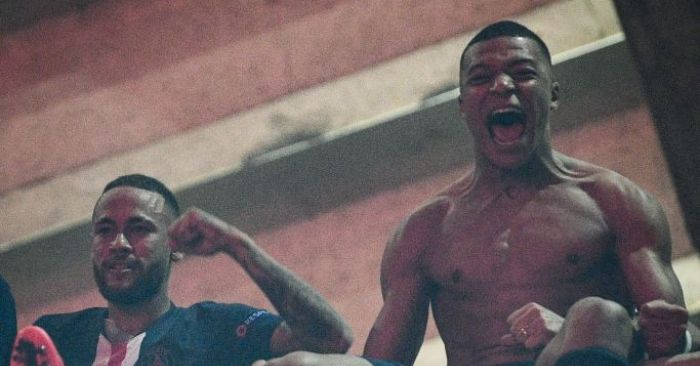 How do you get Man Utd, a signing and Kylian Mbappe into the same headline? Plus fans will be waiting a literal week to get into games…

Fan fiction
While the back page of The Sun rather sensibly leads on those stark quotes from FIFA medical chief Michel d’Hooghe, who warns that “the world is not ready for competitive football”, the newspaper’s website did not receive that memo.

That story is actually shoved into a sidebar on their football homepage to make room for the biggest story at Wednesday lunchtime: a PICTURE EXCLUSIVE lead from Neil Custis.

There’s a harrowing sentence. Has his phone gallery been leaked?

Thankfully not. Instead, we are told that ‘the key to lifting the Premier League’s football lockdown for fans could be found in a Hong Kong exhibition centre’.

Oh Christ. Apparently ‘the coronavirus-busting technology’ on show at the AsiaWorld-Expo centre ‘is already being discussed in some football circles as a way to support the gradual return of crowds to grounds’.

Custis adds that while implementing the technology at football stadiums would pose ‘huge’ difficulties, it could actually ‘prove to be a giant first step towards letting supporters back’ into games.

And it could. It could also be a load of utter b*llocks. Is it really worth pointing out that getting tens of thousands of people to end long periods of social distancing to queue up together and walk through ‘sanitising pods’ one at a time is really f**king stupid? What if just one of those fans is carrying the disease while being surrounded by others?

Even if this is only a ‘gradual’ measure for certain supports to attend, it makes no practical sense and it’s irresponsible to suggest otherwise.

Mind you, apparently ‘the process in the ‘Tunnel’ takes just 12 seconds’. The highest Premier League attendance so far this season was 73,737 at Old Trafford in October. It would have taken 245.79 hours, or just a week and three days, for each of those fans to be checked and allowed in.

The lowest Premier League attendance so far this season was 10,020 at Dean Court in December. It would have taken just one day and nine or so hours for each of those fans to be checked and allowed in.

Why aren’t we implementing this right now and getting previously quarantining people to stand next to each other for hours for the privilege of watching Burnley beat Bournemouth 1-0?

Complicated
The fun does not end there. ‘The centre’s next scheduled event’ – at which these pods will presumably be in use to the public – ‘is an Avril Lavigne concert on May 24 which will have a capacity of 16,000.’

And that will be news to the actual Avril Lavigne, who cancelled the Asian leg of her world tour in late February (we’re devastated, too).

It turns out that mass gatherings across the world are being avoided wherever possible. Who knew?

But hopefully the ‘football circles’ that are definitely discussing the prospect of using this technology remember that it is only in use in Hong Kong, where there have been barely over 1,000 reported cases of the disease since the outbreak, and five deaths. The United Kingdom reported almost 4,000 new cases and 586 deaths on Tuesday alone. That noise you can hear is a horse bolting through your bloody sanitising pods.

If football can return soon while ensuring the safety of everyone involved then great. If football eventually reaches a point in the near future when fans can even be considered for admission then brilliant. But why pretend that is even a vague immediate possibility when everyone knows otherwise?

Kyl chain
In this apocalyptic dystopia, Jake Polden is the newly crowned king.

‘Man Utd may have signed next Kylian Mbappe – who ‘takes the p***’ out of his team-mates’ is his latest offering for the Daily Mirror, and it hits about 427 different holy grails.

Man Utd? Yep. A signing? Mmhmm. The ‘next’ someone? Oh yes. Kylian Mbappe? Sure. A swear? Ding, ding and, indeed, ding.

‘Manchester United may already have the next Kylian Mbappe in their ranks – highly-rated young midfielder Hannibal Mejbri.’

Mbappe actually receives just one mention in the entire story:

‘Mejbri has been compared to the likes of Mbappe – who’s career also began at Monaco – and fellow Man United team-mate Paul Pogba, with many at Old Trafford expecting big things from him in the future.’

He’s ‘been compared to the likes of Mbappe’ by people who know he also signed from Monaco. No-one has ever drawn any other correlation between them. Google it.

But where does that swear come from? An article in The Athletic – that is curiously not linked from the story – from February. And everyone will agree that is a f**king lifetime ago.

In his, erm…defence, Polden was simply taking the lead from the Daily Express website, who merrily claimed that ‘Man Utd boss Ole Gunnar Solskjaer may have signed the next Kylian Mbappe’ a few hours earlier by embarking on the same equation of two plus two and coming up with ALL THE CLICKS PLEASE.

The story, by the way, is top of the Mirror’s ‘MOST READ’ section. Of course it bloody is.

Simon says
Elsewhere on The Sun’s website, Simon Jordan is asking: ‘will football actually help itself?’

He continues: ‘Owners have to face up to pain but frankly the response from the Premier League players is nothing short of an absolute disgrace.’

Mediawatch is also aghast at players raising more than £4m for the NHS. Scoundrels.

‘People are losing money, businesses, careers and lives but footballers are resisting giving up a little money.’

Simon Jordan has no idea what footballers ‘are resisting giving up’ in reality. There are countless examples of them donating money, time, food and all sorts to numerous different causes and people in need.

Footballers also have absolutely no obligation to financially assist the clubs who handed them the contracts in the first place. It is their prerogative to take a cut or a deferral and the matter is far more complicated than that anyway.

But the former Crystal Palace owner – he has a horse in this race, of course – believes the PlayersTogether initiative is merely ‘a smokescreen to deflect from taking pay cuts’. Which is incredibly insulting.

‘Only one club’s players – Arsenal, minus the staggeringly unaware Mesut Ozil and a couple of team-mates – have taken pay cuts,’ he adds, ticking one more box off the bingo card.

Ozil, for what it’s worth, has resisted taking a pay cut because he wants to see what Arsenal, owned by a billionaire, do with the money they stand to save. And he’s been ‘staggeringly unaware’ enough to donate huge amounts to charities throughout his career.

Perhaps question footballers if you can prove they are giving nothing back to anyone in a time of grave crisis. But calling them out for not unilaterally giving up their wages to clubs guilty of wasting millions themselves seems weird.

An Almighty Mes
That, by the way, is the solitary mention of Ozil in Jordan’s entire column. The headline?

Into the unknown
‘Fernandinho lauds ‘unbelievable’ coaches who took him from unknown to Man City star’ – talkSPORT.

Brazil international, UEFA Cup winner, scorer against reigning European champions Chelsea. Household name? Not at all. But ‘unknown’ is a bit much.

And finally…
This week, in The Sun website‘s weird quest to placate those unaware you can find naked women on the internet:

That university degree sure was worth it.

Recommended reading of the day
Sid Lowe on Michael Robinson.

Miguel Delaney with the latest on international football.