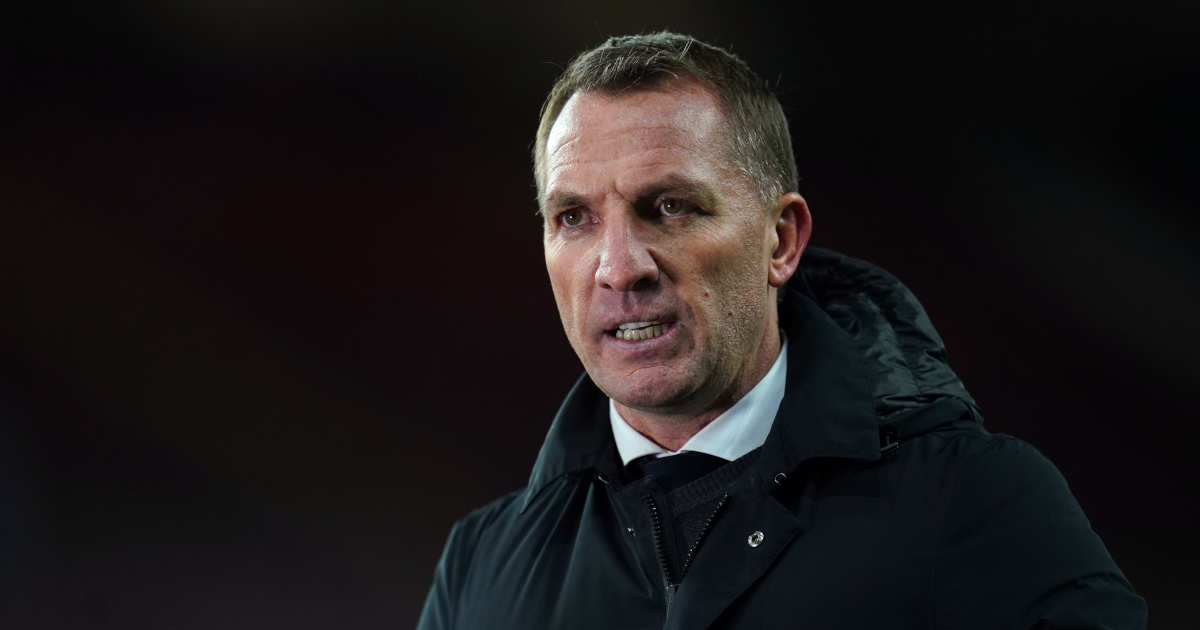 Brendan Rodgers and the Daily Mirror will be delighted to learn that Leicester and Tottenham have been granted belated big-club status.

When is a ‘big-club’ not a ‘big-club’?
Those among you who follow Mediawatch daily will already be aware of the tabloids’ breathless reaction to the worsening Covid situation, and this morning they’re basically reprising that story across the back pages, only this time the focus is very much more on managers and their reactions to it all.

The Daily Mirror leads with ‘We asked to call Spurs games off and it was turned down. It makes me feel there’s a big-club bias’ on its back page, from Brendan Rodgers, which sounds very much like a direct quotation, doesn’t it? Can you guess what’s coming next? Of course you can. It isn’t one.

For once, the words shoved into Rodgers’ mouth aren’t the complete opposite of what he actually said, but a little digging seems to indicate that the ‘big-club’ stuff was repeatedly asked during the press conference and Rodgers merely described it as “a great angle to take” and “on the right lines”.

This is, Mediawatch presumes, all bad news for Spurs’ ‘big-club’ aspirations (insert your own jokes here), since both and Leicester and Spurs requested to have their match called off but had that request rejected by the Premier League, and good news for Watford and Burnley, who are surely both now afforded ‘big-club’ status as a result of having their match called off at less than three hours’ notice. It might be bad for Leicester’s too. They won the Premier League in 2016 and the FA Cup in 2021 but are destined never to be classed (by the likes of the Daily Mirror) as a ‘big club’. Or even a ‘big-club’.

And then after all that, Leicester v Spurs was indeed called off at Thursday lunchtime. Congratulation to them both on having their big-club status confirmed. And to the Mirror for making Rodgers look very silly.

Christmas Rafa
‘Agent’ Rafa Benitez features in the Daily Express, with David Maddock reporting on a ‘further breakdown’ with defender Lucas Digne, who has pulled out of their squad for their trip to Chelsea with the somewhat vague ‘sickness’.

Asked the leading question of whether he thinks Digne is actually ill or not, Rafa offered the cryptic, “It is not that I believe it or not”, and the Express’s headline claim that ‘Everton boss questions his star’s desire’ is even better hidden. Presumably they’re referring to Rafa saying, “I have to be sure that the players that will be there tomorrow want to be there and they want to fight for this club, and that’s it”, but it’s not particularly clear that he’s even talking about Digne there.

If anything, Rafa’s quotes give the impression that he didn’t much want to be doing a press conference at all in the first place, and that’s a flex that Mediawatch can definitely get behind.

Better not call Saul
In among the match reports and Covid reporting, the sports pages are actually quite sober at the moment, with many of their hot take peddlers apparently out of the office. But at the Daily Mirror, Brian Reade is still sitting at his laptop, bashing away at his keyboard like a man possessed.

Reade turns his attention to the transfer market with – considering who he’s writing for – a piece that borders on being self-aware.

‘There are many cliches and myths attached to football’s twice-yearly transfer windows,’ Reade begins.

‘They are always full of “on/off sagas”, “last-ditch bids” and “wantaway stars” who “hold clubs to ransom”, as they issue “come-and-get-me pleas”. And the transfer window “slams shut”.’

Having taken three paragraphs to list some cliches thrown out by tabloid newspapers on a daily basis, Brian turns his attention to a very online football supporter of his imagination, who demands ‘the signing of a player they’d never heard of, until he was linked with their club by an Italian clickbait site, and whose YouTube highlights package found them swooning’.

Well, we can all agree that those people are pretty annoying, but Brian has a case study for us: Saul Niguez, who he describes as ‘last summer’s red-hot transfer rumour’. Presumably this was just behind Harry Kane, Cristiano Ronaldo, Jack Grealish, Romelu Lukaku and a few others in the ‘red-hot transfer rumours’ stakes, but never mind.

‘The Spaniard was last summer’s red-hot transfer rumour, linked with most of the top sides, with social media hordes berating their clubs on a daily basis for not announcing him. During a pre-season tour, a journalist asked a manager of one of those clubs if he was working to bring Saul in, and he laughed and replied: “He’s nowhere near our radar. If Atletico feel they need to get him off their payroll why should we be interested?’

Note that the ‘manager’ referred to is not specified. Might we presume that it wasn’t Thomas Tuchel? Why the coyness, Brian?

‘On deadline day Chelsea paid a £4million loan fee with an option to buy the Spain international, much to the anger of some of the Saul disciples at other clubs. Until he became a resounding flop.’

Well, hold on there, Brian. Let’s just consider that. Saul played 230 games for Atleti and has been capped 19 times by Spain, but the implication here is that anyone who talked up the possibility of Saul moving during the summer could only have known about him through YouTube compilation videos. Perhaps Brian doesn’t know that we can pick up La Liga on the television in this country these days. And that Saul has scored in a Champions League final penalty shootout, having played the previous 120 minutes. He also glosses over the fact that, for a club the size of Chelsea, £4m isn’t really that much for a loan deal. If anything, it’s such a low amount that Saul starts to sound like he was a player worth taking a chance on.

There are valid criticisms to be made of those who do base their opinions of players solely on YouTube highlights. Saul is a defensive midfielder who only scored 26 goals in those 230 games for Atleti, so fixating on goal highlight compilations is pretty stupid, but Brian doesn’t bother making his criticism constructive.

Instead, he says, ‘Insert your own laugh-emojis’, and then goes on to ask ‘why Chelsea bothered to bring in a midfielder who last played for Spain two years ago, and who Atletico were keen to offload, when they had two midfield gems in Billy Gilmour and Conor Gallagher? Especially when Gilmour had proven he could fit neatly into the defensive slot Saul was brought in to fill’.

Well, Gilmour and Gallagher are 20 and 21 years old, so perhaps Tuchel felt that he needed a little more experience in a defensive midfield position. And perhaps he believed two young players would benefit from regular playing opportunities at a high level instead of drip-fed Chelsea minutes in case of injury.

There’s a grain of a point to be made, here. People who line up in the replies screaming ‘ANNOUNCE FOOTBALLER’ are supremely annoying. But Mediawatch is also confident that Chelsea don’t base their transfer policy on which names get mentioned the most, that the club doesn’t scout players on the basis of YouTube compilations, and that they were fully aware of accomplished footballer Saul Niguez before they paid a seven-figure sum to take him on loan.

‘Be careful what you wish for, YouTube scouts’, he concludes. Probably a good job that they have precisely no say whatsoever over any football clubs’ transfer policies, really.

Pull the Auba one, Brian
But Brian’s not done yet. On Arsenal and Pierre-Emerick Aubameyang:

When Pierre-Emerick Aubameyang signed a three-year deal with Arsenal 15 months ago, to much fanfare. he declared: ‘It’s time to work a lot, to become a legend. I will always give my best as always.’

Alongside Auba, a delighted Mikel Arteta spoke of how the 31-year old was worth every penny of the potential £55m contract because he possessed ‘incredible mentality’. Looking back, it’s hard to decide who was kidding themselves more.

It was probably the 70 goals in all competitions in the previous two-and-a-half seasons (two of which won them the FA Cup in 2020, about six weeks before he signed the contract extension) and the 141 goals he’d scored for Borussia Dortmund before they signed him, Brian, to be honest.

Look, we can all agree that Auba and Arsenal is not working now to the point that the player may never play for the club again, but anyone who believes that the contract renewal didn’t look like the right decision for Arsenal to be making in September 2020 is kidding themselves. Hindsight has 20/20 vision, but let’s not go rewriting history.

Lipton’s Iced Takes
Finally, in The Sun this morning, Martin Lipton is reduced to this:

‘Tottenham fans may be hoping a Covid wave forces the Prem season to be cut short – so they can be elevated into a Champions League spot.’

So what Martin is basically saying here is that if the Premier League season has to be curtailed (and let’s be clear here; this hasn’t been seriously mentioned anywhere whatsoever), it may be decided on a points-per-game basis, and because Spurs have either two or three matches in hand on everybody around them in the Premier League, they could theoretically be lifted into a Champions League spot.

They could. If the decision is made in December to end the campaign six months early, which does seem unlikely. And is something that no football fan will be ‘hoping’ for. Tottenham are four points off fourth with three games in hand; supporters probably fancy their chances of closing that gap instead of just curtailing the season.

And is Lipton implying that PPG wouldn’t be the fairest way of deciding this if there was no way of completing the season? Or is it merely that he had a 300-word gap to fill, and ‘the Premier League would, if no alternative was available and the season definitely had to be curtailed, be decided by a measure that is probably fairer than completely disregarding the number of matches teams have played’ wasn’t quite long enough?