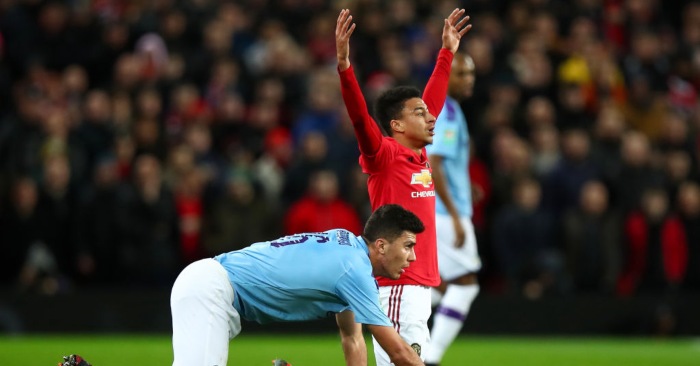 Axe wounds
We start – because where else would you start? – with the back page of The Sun, which exclusively claims that ‘JESSE LINGARD is facing the Manchester United axe’. Apparently Ole Gunnar Solksjaer is ‘so annoyed’ that Lingard will be replaced by Juan Mata this weekend against Norwich.

DROPPED a bollock
More annoying than that Sun back page are the copy-cat stories that then flood the internet, with no regard for the fact that this is patently not an actual story. Because nobody gives a shit about that anymore.

MailOnline go for ‘Jesse Lingard set to be DROPPED by Ole Gunnar Solskjaer for Norwich clash’ after Manchester United midfielder was hauled off at half-time during defeat by rivals City’.

Yes. Actual capitals even though Lingard is literally DROPPED more often than he is NOT DROPPED.

And on The Sun’s website, they go for the wonderful ‘Solskjaer to axe Lingard as patience finally runs out with misfiring Man Utd flop’.

Yes, ‘patience finally runs out’ on a player who literally started no Premier League games in October or November.

Mbappe, ba duba dop
A reminder – should it be required – that Jurgen Klopp has unequivocally ruled out a move for Kylian Mbappe, saying recently that he is “too expensive for us” and that Liverpool had “absolutely no chance” of signing him.

And yet here is a selection of headlines from Thursday morning:

Mediawatch despairs amid a right load of crap about Mbappe and Liverpool.

Not worth the hassle
It’s a bit of a bare Thursday for news so the MailOnline of course turn to the latest from the CIES Football Observatory, who have been using their algorithms to fill slow news days for as long as we can remember.

‘Kylian Mbappe is Europe’s most expensive player with Raheem Sterling and Jadon Sancho just behind… but who else makes the top 20 most-valued stars and which EVERTON star makes the cut?’

Well, the EVERTON star who makes the cut is probably the one with 19 caps for Brazil. Though the suggestion that he is somehow worth more than Neymar is seriously flawed. Try offering PSG just £85m for the actual most expensive player in the history of football. Try offering Tammy Abraham (£88m) in a straight swap deal.

These are numbers created by algorithms that are ridiculously weighted in favour of youth. Hence, we are supposed to believe that Jadon Sancho is currently ‘worth’ more than Sadio Mane or Harry Kane. You get the picture; they are seriously flawed.

Which makes it a little curious that we then open the MailOnline story to see these numbers being presented as fact.

‘Kylian Mbappe is the world’s most valuable footballer with Manchester City’s Raheem Sterling second and Mohamed Salah of Liverpool third.’

Now excuse Mediawatch while we go and tell Jan Oblak that he is now worth less than Dwight McNeil.

LIVE-ish
‘Transfer news LIVE: Man United and Arsenal make Cavani bids, Chelsea eye Diop, Liverpool latest’ – The Independent have all the LIVE transfer news on Thursday morning as they report the news from Spanish sources that the Metro were quoting on Tuesday.

LIVE-esque
Mind you, it’s talkSPORT that take the biscuit with that kind of tomfoolery as they promise LIVE with this headline:

How handy that Jack Grealish is being ‘tipped’ for a move just after another headline-grabbing performance for Aston Villa.

So ‘tipped’ by who? Is it ‘news’ or is it ‘gossip’? Or is it day-old quotes from Neil Warnock saying that Grealish would “strut his business” at Manchester United?

The Sun appear to have forgotten about Aymeric Laporte in their ambitious ‘how Manchester City will line up next season’ graphic. pic.twitter.com/WUtjuSwwh5

And Bernardo Silva, who was really rather good against Manchester United two whole days ago.